Should progressives abandon identity politics? No, a new report suggests women of color should lead the movement 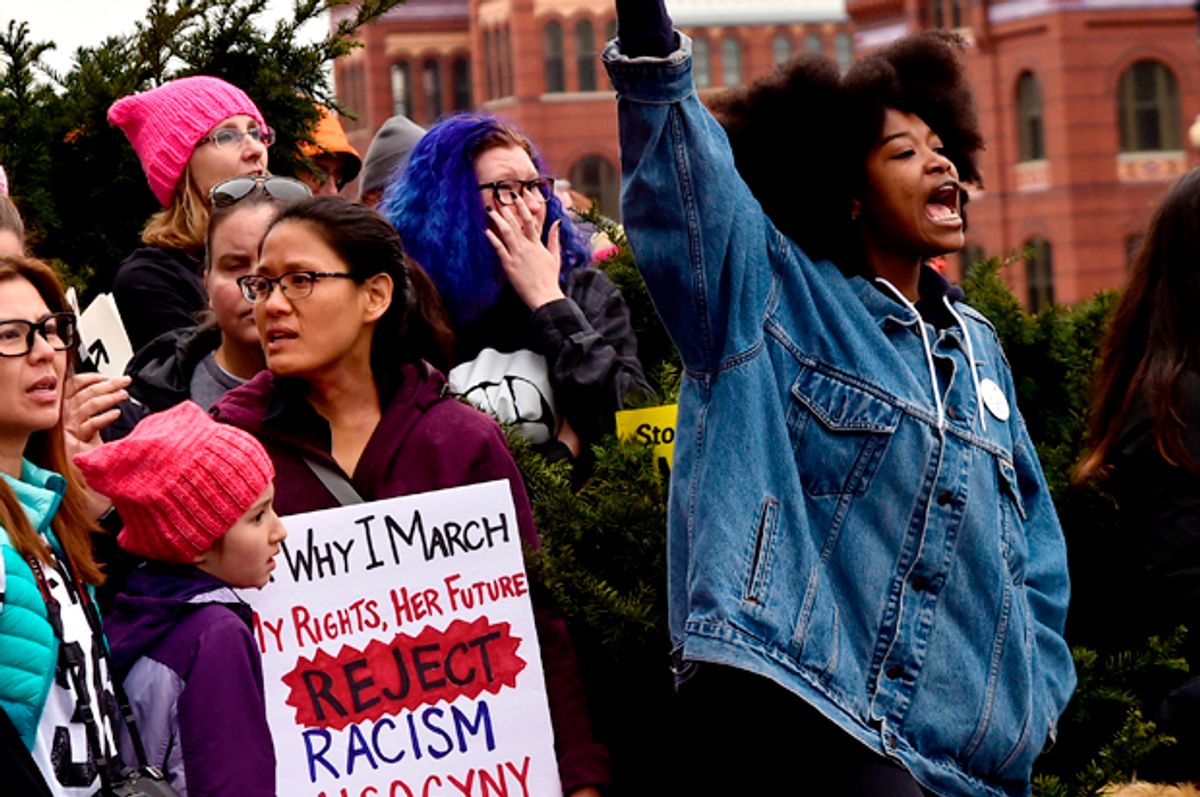 When Andrea Flynn, a fellow at the Roosevelt Institute, started work a year ago with the Ms. Foundation on a report about the racial and gender barriers holding back women of color in the United States it was a very different political landscape. It's not just that Donald Trump wasn't yet president, but the notion that "identity politics" was some sort of toxin destroying liberalism had not yet really taken root.

Trump's narrow electoral victories in Wisconsin, Michigan and Pennsylvania, however, spawned a popular new theory among the chin-scratching white-male liberal set — that identity politics, which have placed anti-racism and feminism at the center of progressive ideology, have harmed progressivism and need to be abandoned in favor of a more identity-neutral message based only on economics, in order to appeal to white-working class voters.

In a widely shared New York Times piece published shortly after Trump's election, Mark Lilla scolded Hillary Clinton for "calling out explicitly to African-American, Latino, L.G.B.T. and women voters at every stop," which he suggested made white men feel left out and resentful. He argued that liberal discourse about race and gender was somehow preventing people from addressing such "perennial questions as class, war, the economy and the common good" and suggested that a "healthy" political framework "is not about 'difference,' it is about commonality."

Lilla's views took off in the progressive discourse, particularly among white men who will definitely flip out if you suggest they have self-interested reasons for wanting to minimize the attention given to increased diversity, particularly in progressive leadership. They're not claiming that racism and sexism don't exist, proponents of Lilla's theory will say, just that the ur-struggle that will solve all others is the struggle against capitalism. This recent Jacobin tweet is a good example:

Flynn and her team knew their report, titled "Justice Doesn't Trickle Down" and released Wednesday morning, had to address this controversy.

“The focus [of the report] has always been on women of color," she explained on the phone. "But we felt particularly in this political moment, it was really important to call out how some individuals are more vulnerable than others.”

She continued, “Yes, fixing current economic policies will move the needle a bit,” but "for women of color, social justice will not be an inevitable by-product of economic progress.”

According to the report, "Racism and sexism, like many other forms of discrimination, have been baked into our social and economic systems and will not simply fall away as a fairer economy emerges." And it added, "The recent calls to abandon identity politics in favor of a race- and gender-neutral approach" would "simply exacerbate race and gender inequities and injustices."

Angélique Roché, the vice president of external affairs for the Ms. Foundation, said by phone that acknowledging diversity and the distinct challenges that different people face is ultimately the best way to create a stronger progressive movement. “It has always been true that if we help the least of us, it benefits all of us," she argued, pointing out that it's hard to take full advantage of better economic opportunities "when we are literally setting the start line for women and people of color so far back that their mere existence is being criminalized."

Roché asked, “If we don’t look at the different policies and how they’re targeted, how will we ever get to equity, much less equality?"

One major topic covered in the report is health care disparities. "Improving economic outcomes alone would not sufficiently address the myriad other rules contributing to the gendered and racialized disparities and inequities that have come to characterize the U.S. health system," Flynn wrote.

Krystal Redman, whose work with SPARK Reproductive Justice Now is highlighted in the report, agreed. “Accessibility to coverage is important," Redman explained over the phone, noting that racial and gendered barriers to care don't "solely go away just because someone has coverage."

“There are many providers who have their own ideas of how a patient should be treated based on how they present," Dr. Redman said.

As an example, Redman argued that a black woman with four children who goes to the gynecologist is more likely to be pushed into a long-acting form of contraception than a similarly situated white woman, who is more likely to have a chance to engage in dialogue with a doctor about whether she wants any more children.

Another huge example of the limits of an economics-only framework is the way that law enforcement treats white people differently than black and brown people. Just this week, Redman said, she had personal experience with that. Her husband, “a dark-skinned black man, tall, dreads, everything like that,” was pulled over "because the cop said he was following too closely behind another vehicle," she claimed.

"We can’t overcome those small heart-flashes of, ‘Oh God, am I going to be safe?'" when things like that happen, she said, and that's why "we need to center race" in the progressive movement.

Flynn agreed, saying there's an economic impact that results from the way that people of color tend to be over-policed and funneled into the criminal justice system more often than white people.

“Even if people of color are able to have higher wages or better economic opportunities," Flynn argued, "the fines and fees and experiences associated with the criminal justice system really serve as a wealth-stripping mechanism that is really sucking resources out of those communities.”

In 2015 the Department of Justice highlighted this issue in its report on the police in Ferguson, Missouri. Law enforcement in the area clearly saw ticketing black citizens for every little thing as a handy source of revenue. Accumulating wealth is hard when a white-run police force is treating your savings like a piggy bank.

For Roché, the election of Donald Trump as president and the formation of the resistance against him makes it even more important to put women of color and their experiences at the center of the progressive movement.

“We have been fighting for freedom for several centuries now," she said, not without a note of humor.

The recent resurgence of the organized labor movement, Roché added, is one example of how the "perspectives and insight" gained by emphasizing identity politics and putting women of color in leadership roles can help progressives. Traditionally, the labor movement has been seen as the organizing of white men in manufacturing jobs. But these days, the movement is growing because of the activism of service workers who are disproportionately women of color. That changes the shape of the labor movement, but also makes it stronger and more forward-looking, Roché suggested.

“The fight we’re fighting now, under the new administration, isn’t new for these women," she said. "They have been fighting in Mississippi, in Albuquerque and Miami and Tennessee and Kentucky, for years.”

Roché believes in people coming together, but maintained that simply won't work if they have to leave their identities and unique experiences behind them. Those experiences are "what motivates us to be passionate," she said. "The things that impact us are what motivate us to fight together."