With over 2,000 suspected cases reported daily, cholera outbreaks wreak havoc in a country already in need of help 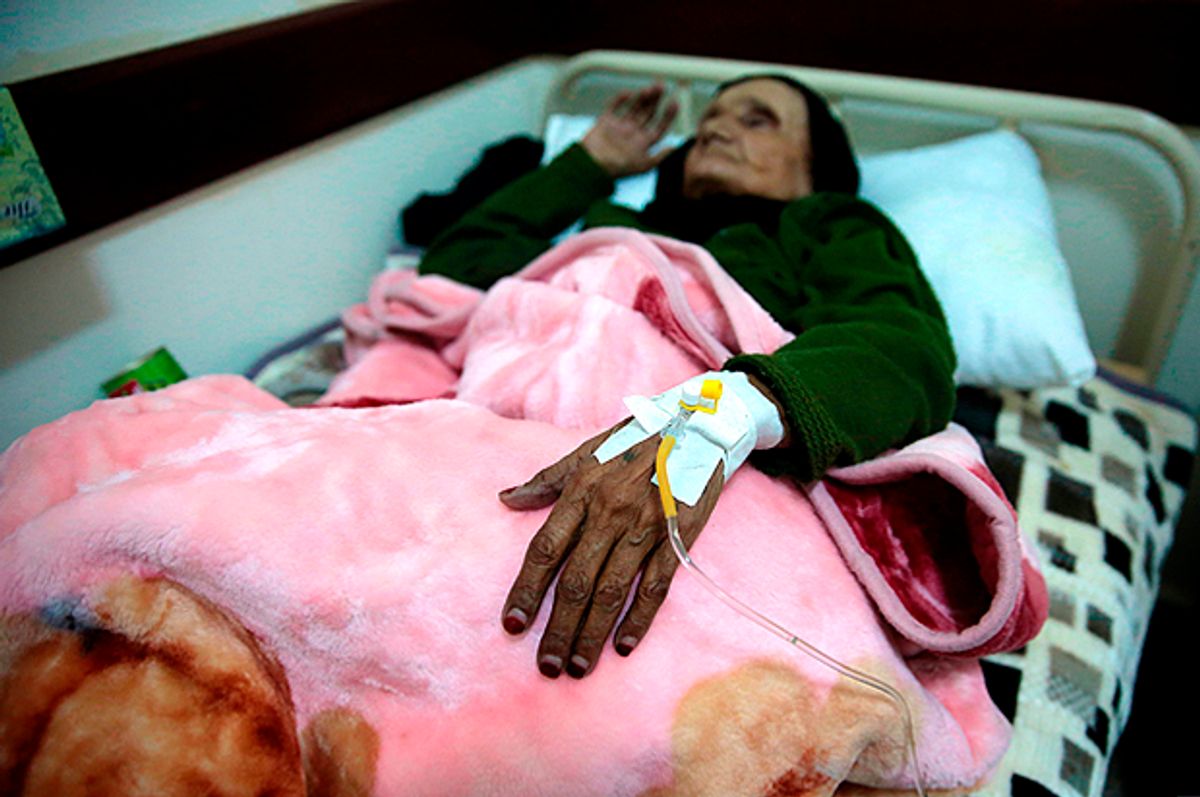 An elderly woman is treated for suspected cholera (AP/Hani Mohammed)
--

Rapid cholera outbreaks are just the latest devastating blow to the country of Yemen, currently suffering a civil war. A World Health Organization document showed that since April 27, 2016, there have been 35,217 suspected cases of the bacterial disease in Yemen, according to Reuters.

This amounts to more than 2,000 suspected cases reported daily, as the Guardian reported, and currently an investigation is taking place to determine whether or not a "more deadly strain of the disease is responsible for a second wave of cases that hit the country last month." Samples of the Yemeni strain of cholera are being sent to French laboratories for analysis, the Guardian also reported. The epidemic has spiraled out of control due to a lack of clean water and a devastated civic infrastructure as a result of a civil war, which has led to the widespread decimation of hospitals, schools and markets.

Since December, there have been 61,000 reported cases of cholera. That number could rise as high as 300,000 in the next six months, according to Reuters.

"This is the second wave of cholera we have seen here recently, and it is spreading at an alarming rate," Nevio Zagaria, head of mission in Yemen for the World Health Organization (WHO), told the Guardian. "We had an outbreak that started in October 2016 and which declined in January. Now, in the last month, we have seen more cases in three weeks alone than in the previous six months."

The bacterial disease will spread rapidly if untreated, and can kill victims in a matter of hours if it goes untreated, but the symptoms aren't always easy to detect.

Caused by ingesting the Vibrio cholerae bacterium from water or food contaminated with faeces, cholera usually manifests itself with a sudden onset of acute watery diarrhoea and can kill within hours, although three-quarters of infected people show no symptoms.

The short incubation period means outbreaks can spread with explosive speed, especially in places without safe water and proper sanitation, according to the WHO.

Currently 80 percent of the Yemeni population, or 20 million people, are in desperate need of humanitarian assistance, according to a report by Human Rights Watch. The country is also heavily reliant on importied goods, but a blockade imposed by the U.S.-backed, Saudi Arabia-led coalition forces has left the country devastated and on the brink of starvation.

One doctor told the Guardian that suspected cases of cholera are rolling in by the hour. "I personally received 180 cases in one day. People are left lying in the corridors and in some cases we are having to put six children in one bed," said Dr Mohammed Zaid.

"We are urging the international organisations to scale up their response. We are facing so many challenges: we lack medicines and medical supplies, we do not have enough doctors and nurses. We don’t even have a place to wash our hands," Zaid said.