"I don’t understand this situation at all": Easter egg hunting in "Twin Peaks" 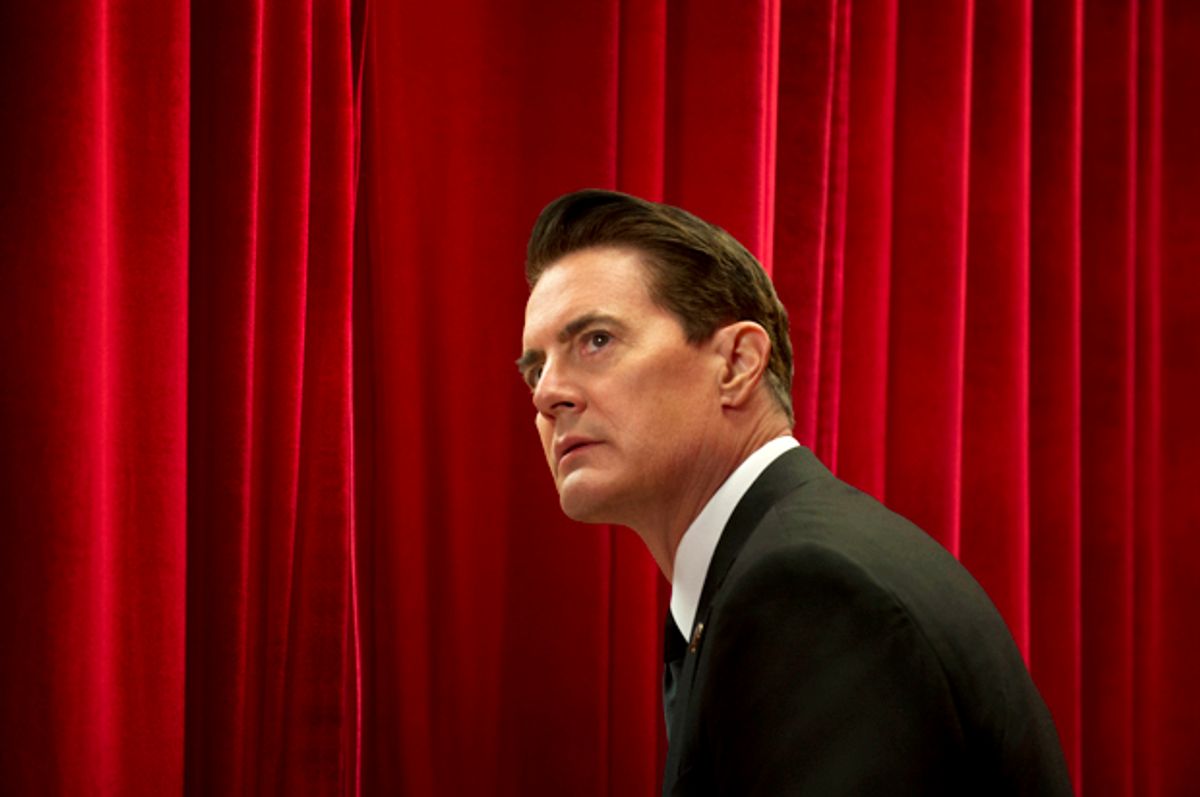 Spoiler alert: The following article discusses plot details from parts 3 and 4 of “Twin Peaks,” currently streaming online prior to their Showtime debut on Sunday at 9 p.m. If you haven’t seen them yet, stop reading now.

“Albert, I hate to admit this, but I don’t understand this situation at all.”

Very funny, David Lynch. See, that line is delivered by Lynch’s character, Deputy Director Gordon Cole, at the end of the fourth hour of Showtime’s “Twin Peaks” revival. He says it after he’s met with a man professing to be FBI Agent Dale Cooper (Kyle MacLachlan). But the Cooper to whom he’s spoken not actually Agent Cooper, and Cole figures that out over the course of a conversation that, even if a viewer hadn’t seen all that came before it, felt noticeably off.

“Do you understand this situation, Albert?” he asks his field partner Albert Rosenfeld (Miguel Ferrer).

“It doesn’t get any bluer,” Cole says in agreement.

Welcome to the new “Twin Peaks.” Population: Who can tell, what with all those cameos and Easter eggs? You know what those are, right? Secrets hidden in plain sight, relating to previous episodes or, in this case, maybe an entire feature film.

Before these episodes premiered, Lynch hinted that his cinematic follow-up to the original ABC TV series, 1992’s “Twin Peaks: Fire Walk with Me,” is very important to the events of these new episodes. “Fire Walk with Me” introduces the blue rose at the beginning of the film as part of a code (delivered in a deliberately weird dance by a woman who meets Cole and two other FBI agents, played by Kiefer Sutherland and Chris Isaak, at the airport).

Laura Palmer’s murder, it is implied, is a “blue rose” case. What that means yet, we don’t fully understand. But that’s OK because four hours of these new “Twin Peaks” episodes has left us baffled about a lot of things, not to mention wondering if there will be a point to all this.

Ultimately this is the central question a viewer must ask herself – not “what am I watching” but “why I am watching and what am I expecting to get out of this show?” For what we’re seeing is another grand Lynch experiment in breaking form and creating a universe whose topmost purpose is to incite wonderment and visceral reaction.

Plot and linear concepts of storytelling, such as they are, are secondary to this aim. Of this, the third hour left no doubt: More than half of the episode was devoted to getting the real Agent Cooper back to Earth after his long fall through space. Cooper lands with a thud, alive and unburnt, in a world rendered in grape. There he encounters a woman whose eyes have been sealed shut and who can communicate only wordless whispers. The gigantic head of Major Briggs (Don S. Davis) is floating through the cosmos muttering, you guessed it, “blue rose.”

There’s almost nothing but bewildering images such as these for almost 27 minutes, and they may exist simply to show what Lynch can come up with when he’s given a palette to play with. It’s as if Lynch gazed at Luis Buñuel’s 21-minute surrealist film “Un Chien Andalou” and scoffed to himself, “amateur,” pledging to top that madness by many more hours.

Then again, every single moment could be laden with meaning, too. Numbers play prominently through the third and fourth episodes, with plaques on what appear to be the interior of electrical outlets reading three, or 15, large digits on a watch letting us know what time Cooper falls to Earth (2:53, a recurring combination), and a junkie screaming “one, one, nine!” to nobody but her young son as they sit in their house, which happens to be across the street from where doppelgänger Dougie Jones diddles a prostitute named Jade.

Did we mention Dougie? Oh yes. Recall that evil Cooper, aka Mr. C., declared in the second hour that he wasn’t going back. When the clock struck 2:53, Mr. C and Dougie began barfing up creamed corn swirled with blood (and in Mr. C’s case, dark sludge). Mr. C, in the midst of driving down a highway, used his hand to hold back as much as he could as he steered into a crash. Dougie, post coitus, disappeared only to be replaced by Agent Cooper. The agent’s wits, however, have yet to be found.

Another very important number is four, as in hour 4.  For its final moments, when Cole has the aforementioned exchange with Albert, effectively announcing the last stop on this Lynch train’s local line. From this point forward, it’s nothing but the express, a ride for diehard fans of the filmmaker only and professional viewers required to stay in their seats.

Heaven help you, pop culture completists, you can feel free to come along, too. Don’t forget that you can exit any time, but be warned that the longer you stay on, the faster it goes and the nastier the post-jump bruises will be. (Tuck and roll, friends; tuck and roll.)

Because these initial hours of setup leave the nagging sensation that “Twin Peaks” is artfully constructing a path toward no place in particular — that perhaps its purpose is to take the obsessing television hobby it created, the sifting of clues and debates over hidden messages, to the next level and then pull back the curtain to reveal, surprise, that we’ve been chumming red herrings under our spinning wheels all along.

Maybe we will find that said version of no place in particular explains the Black Lodge and the Owl Cave symbol. But is that really what we want? The beauty of the Black Lodge as a concept is that it simply is, and many viewers accept that. Unexplained weirdness is an admirable distraction. Not enough of it exists on television, and much of what does can be traced back to this series in its original incarnation.

Or maybe it helps to view the show as an absurdist comedy in which the joke may ultimately be on us, like that sign that reads "disturb" on the closed door of the conference room of the Twin Peaks sheriff's department. Michael Cera’s appearance as Lucy Moran and Deputy Andy Brennan’s son, dressed like the lead in “The Wild One” and doing his best imitation of Marlon Brando by way of Chris Elliott, extends the joke for a few beats too long. But it was impossible to not laugh at the outrageous pointlessness of it. (Naomi Watts’ role as Dougie’s wife, on the other hand, is much more straightforward.)

And this is one of many innocuous details that make me wonder if Lynch and “Twin Peaks” co-creator Mark Frost are simply doing this to take advantage of cable’s blind enabling of auteurs. David Milch did it, pulling the plug on the brilliance of “Deadwood” to bring us the inscrutable dreck that was “John from Cincinnati.” We’re all waiting for Noah Hawley to creatively collapse at some point, since from outward appearances nobody seems to be saying no to him either (although truthfully he’s hasn’t failed us yet). We’ve seen premium cable nonsense before. It’s fair to wonder whether we’re being hoodwinked all over again.

Then again the stakes are relatively lower in this case. We’re only talking about 18 parts, after all — child’s play.

For all the hype leading up to its premiere, viewers appear to be content to take their time in discovering the new “Twin Peaks.” The two-hour premiere’s initial airing averaged 506,000 viewers on Showtime. (Factoring in the ratings for encore airings, streaming and on-demand viewing, that number swells to 1.1 million.)

Modest, but it also inspired a record number of streaming service sign-ups in a single day, no doubt because of Showtime’s online release of the third and fourth parts across the streaming service and on demand immediately following the linear premiere of the first and second hours. Enough of us want to pick apart the mystery of “Twin Peaks,” petal by petal, it would appear, even if there’s no way of knowing whether we’ll be left with anything better than a messy scramble.