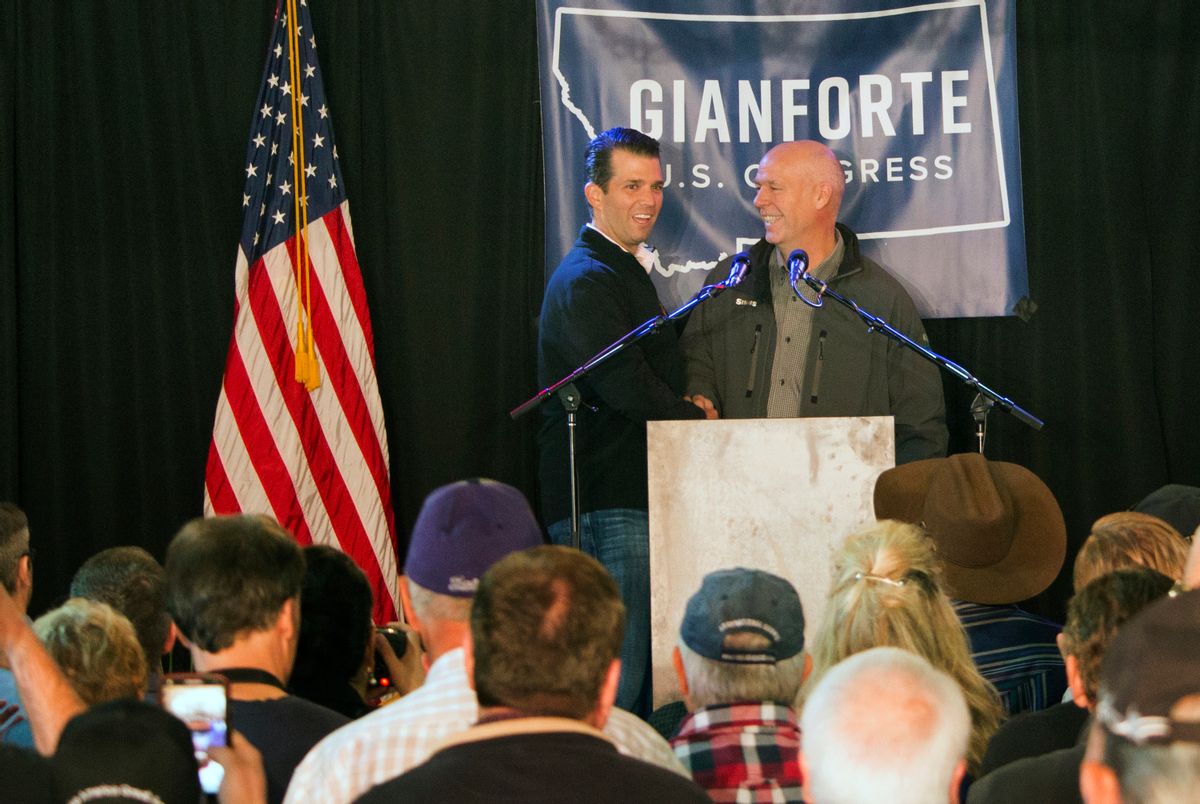 The Montana congressional election was already much closer than many Republicans wanted, so the last thing they needed was for their candidate to be recorded and observed body-slamming a reporter — Ben Jacobs of The Guardian — who did nothing more than ask a tough question.

"If what was heard on tape and described by eyewitnesses is accurate, the incident in Bozeman is nothing short of assault," declared the Billings Gazette as it pulled its endorsement of Gianforte. "We wouldn't condone it if it happened on the street. We wouldn't condone it if it happened in a home or even a late-night bar fight. And we couldn't accept it from a man who is running to become Montana's lone Congressional representative."

The Helena Independent Record, like the Billings Gazette, noted that Gianforte has made threatening comments about the media in the past. "In the past, he has encouraged his supporters to boycott certain newspapers, singled out a reporter in a room to point out that he was outnumbered, and even made a joke out of the notion of choking a news writer, and these are not things we can continue to brush off," the newspaper writes. It adds that, because of Gianforte's attack on Jacobs, "we cannot in good faith continue to support this candidate."

The third Montana newspaper that had endorsed Gianforte also pulled its support.

"The Republican candidate for Congress not only lost the endorsement of this newspaper Wednesday night when, according to witnesses, he put his hands around the throat of a reporter asking him about his health care stance, threw him to the ground and punched him," wrote the Missoulian, "he should lose the confidence of all Montanans."

While adding that Gianforte's guilt or innocence about committing assault should be left to the legal system, the Missoulian added that "there is no doubt that Gianforte committed an act of terrible judgment that, if it doesn’t land him in jail, also shouldn’t land him in the U.S. House of Representatives." It also pointed out that "in case critics say this is just fake news from the liberal media, let us repeat one fact again: The eyewitness account of Gianforte’s actions came from a Fox News reporter."

That account by Fox News reporter Alicia Acuna needs to be read to be believed.

During that conversation, another man — who we now know is Ben Jacobs of The Guardian — walked into the room with a voice recorder, put it up to Gianforte's face and began asking if he had a response to the newly released Congressional Budget Office report on the American Health Care Act. Gianforte told him he would get to him later. Jacobs persisted with his question. Gianforte told him to talk to his press guy, Shane Scanlon.

At that point, Gianforte grabbed Jacobs by the neck with both hands and slammed him into the ground behind him. Faith, Keith and I watched in disbelief as Gianforte then began punching the reporter. As Gianforte moved on top of Jacobs, he began yelling something to the effect of, "I'm sick and tired of this!"

Jacobs scrambled to his knees and said something about his glasses being broken. He asked Faith, Keith and myself for our names. In shock, we did not answer. Jacobs then said he wanted the police called and went to leave. Gianforte looked at the three of us and repeatedly apologized. At that point, I told him and Scanlon, who was now present, that we needed a moment. The men then left.

Acuna describes how the Fox News team was "in shock" and emphasizes that "at no point did any of us who witnessed this assault see Jacobs show any form of physical aggression toward Gianforte, who left the area after giving statements to local sheriff's deputies."

Gianforte staffer Shane Scanlon said that Gianforte merely "attempted to grab the phone that was pushed in his face," according to Acuna. "Jacobs grabbed Greg's wrist, and spun away from Greg, pushing them both to the ground. It's unfortunate that this aggressive behavior from a liberal journalist created this scene at our campaign volunteer BBQ."

As The Guardian itself noted, "Scanlon’s account is contradicted by audio of the abortive interview recorded by Jacobs, as well as the Fox News account."