“War Machine” not a movie for the Trump era, but alas it has Netflix 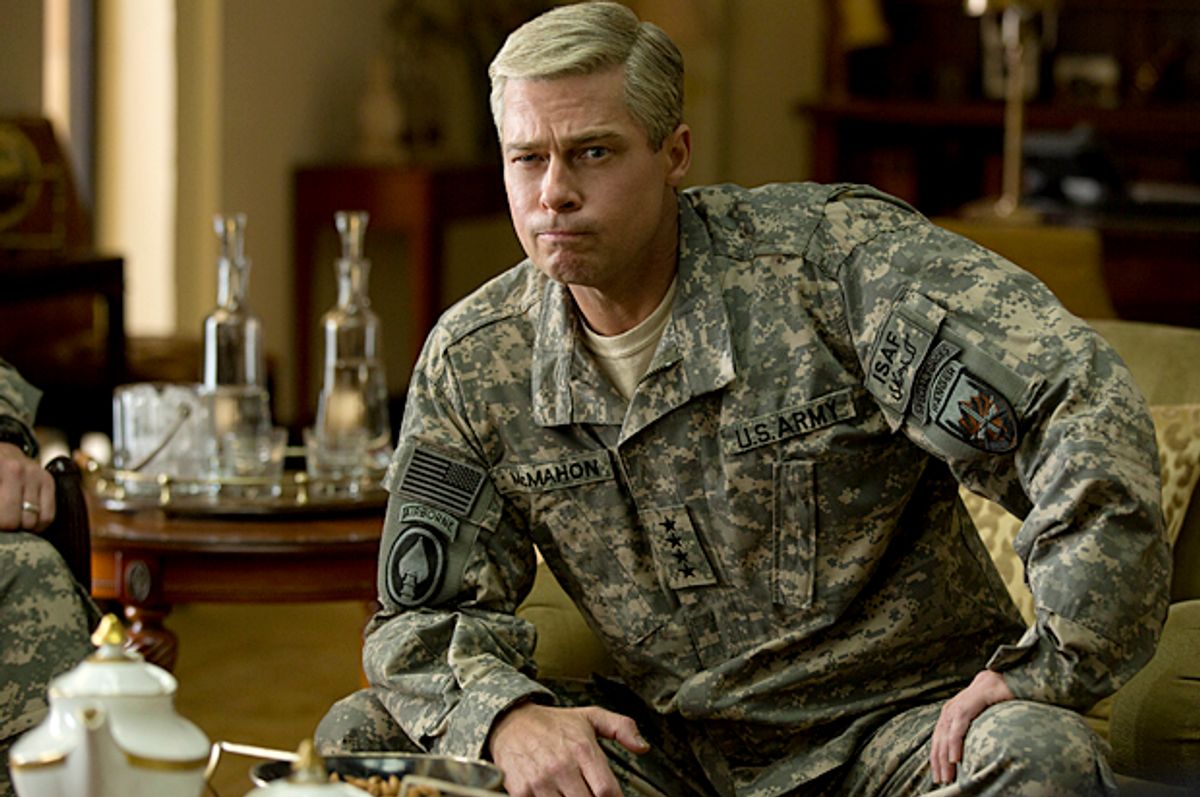 Viewers of “War Machine” will recognize the film’s central character, Glen McMahon. McMahon, a fearless United States Army general sent to Afghanistan to end the war, is based on retired U.S. General Stanley McChrystal. With an edge of satire, the film depicts how McChrystal tried and — no big spoiler — failed to win the war with a bold strategy called counterinsurgency.

In playing McMahon, Brad Pitt exaggerates McChrystal’s cyborg qualities. As general, McChrystal’s daily routine famously included running 7 miles, eating one meal and sleeping four hours. McMahon, aka “The Glenimal,” also runs 7 miles every morning and rarely sleeps and eats. But he also manifests his tenacity in other ways. His movements are so boxy that it’s hard to imagine him ever turning backward; his mayonnaise-over-burnt-toast hair is cut in precise quadrilateral angles; he scrunches his face as tight as he does his terse sentences; and he speaks in a tone as gruff as that of Pitt’s Nazi-slaying bastard Lt. Aldo Raine.

Like Raine, you get the feeling that McMahon would like nothing more than to be killing Nazis all the time. The narrator introduces him as “a throwback to another era,” someone whose “hand was bent into a permanent claw, like it was still clutching a World War II cigar that his modern fitness fanatic self wouldn't allow him to smoke.” McMahon’s entire being is consumed by battle, but like a football player given only a basketball court to play on, he’s forced to adapt to his circumstances.

McMahon is smart and disciplined enough to know that Afghanistan isn’t a war that’s going to be won through fighting. His mistake is thinking that it’s a war that can be won. In an early scene, an adversarial state department suit named Pat McKinnon (Alan Ruck) tells McMahon, “You're not here to win. You're here to clean up the mess.”

The smart play, McKinnon says, is to move the needle a gradation in the right direction. “That's how this ends best for you anyway, a nice looking set of graphs,” he says. “Or a nicer looking set of graphs than the last set of graphs. Either that or get yourself fired. Then you can say, ‘I told you so’ when this all turns to shit or fizzles out or however this thing ends. There's no street parade at the end of this one.”

McKinnon is the archetypal establishment naysayer and McMahon the archetypal maverick odds defier. Their dynamic recalls that of the MLB establishment and Billy Beane (another Pitt character) in “Moneyball.” But where Beane was given the time and freedom to execute his novel strategy, McMahon is not. Chalk it up to one running the A’s and the other running the Yankees. With the United States military, as with Major League Baseball’s biggest ball club, all forces (management, intense press scrutiny, impatient constituents, etc.) work in opposition to radical innovation.

It’s apparent that “War Machine” director David Michôd takes great joy in subverting movie tropes, military and otherwise. When McMahon is put in slow motion, the sparkling dusk sun at his back, it means he’s about to be trumped or humiliated. The lessons of film (that the dreamers are the good guys and that the good guys win) run counter to the lessons of modern war (there are no winners), and Michôd is intent on laughing at the former to convey the latter.

Maybe McMahon’s strategy of counterinsurgency is brilliant or maybe it’s boneheaded; ultimately, that’s irrelevant. The moral here is that no individual, not even one who defies the limits of human potential, is powerful enough to compensate for the faults of a system as big and powerful as the U.S. armed forces. “War Machine” is an existential military film that places McMahon as an easily replaceable hamster running on an enormous and expensive hamster wheel. Maybe McMahon’s running too fast, but the problem isn’t his speed so much as it is the wheel he’s running on.

And yet, none of these characters or institutions comes away looking all that bad either. In a scene where President Obama stands up McMahon, I was struck as much by America’s last president’s nimbleness at playing the political game and the benign nature of his misbehavior as I was by his misbehavior. In the Trump era, the dysfunction of the modern military machine feels quaint. The actors in this dramedy may be cynical and brash, but their intentions all seem reasonable and good; they’re running at different angles, but they’re all running in the right general direction.

It seems likely that normal American military and government dysfunction will resume before long. But regardless, that the film is Netflix property could end up being its biggest victory. The rest of the world can laugh at America’s gall right now. And Americans can stash the film in their queues until another hamster succeeds the drunk elephant currently at the wheel.