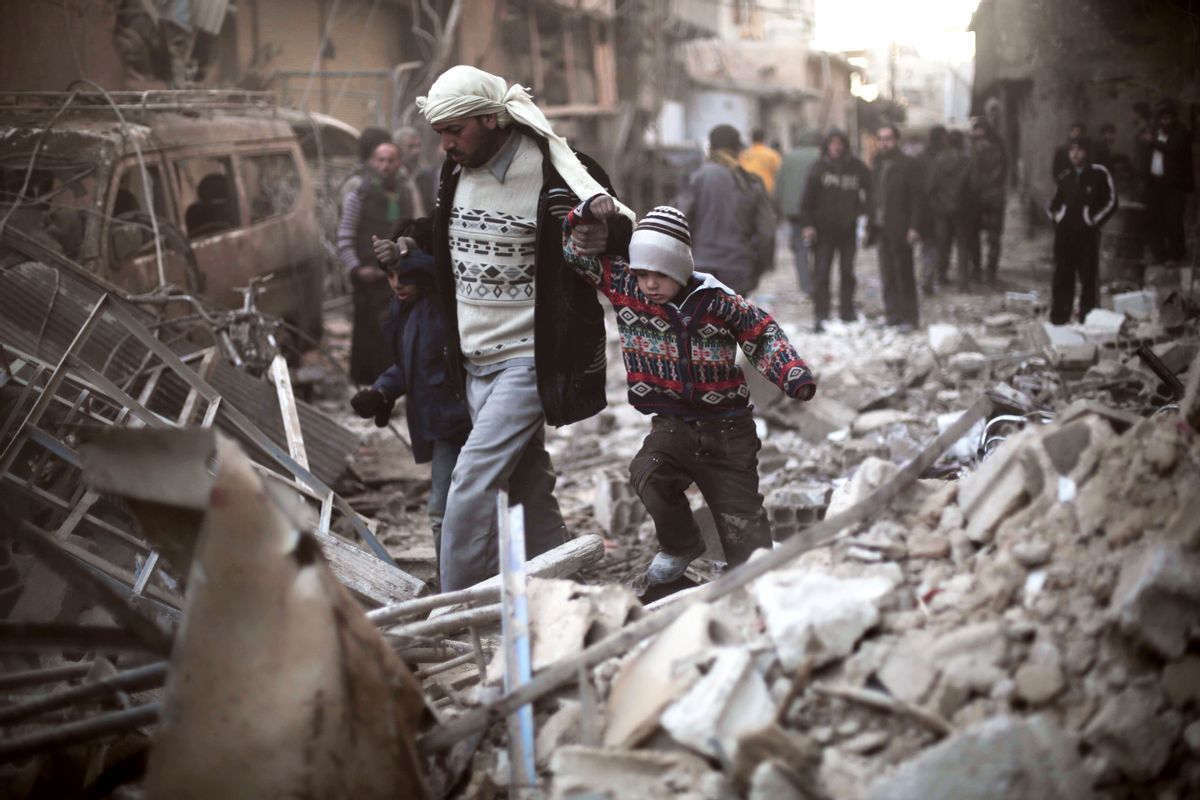 Syria Civil Defense, popularly known as the White Helmets, can be seen in a new video assisting in a public execution in a rebel-held town in Syria. It is at least the second such execution video featuring members of the Nobel Prize-nominated group.

The White Helmets have received at least $23 million in funding from the U.S. Agency for International Development (USAID), a wing of the State Department. The British Foreign Office and other European governments have pitched in as well.

Frequently cited as an invaluable source of information by major Western media outlets, the group was the subject of an Academy Award-winning 2016 Netflix documentary, The White Helmets.

Large corporate media networks have yet to report on the dark side of the White Helmets, however, and films like the widely celebrated Netflix feature function as uncritical commercials for the group, helping to keep the public in a state of ignorance about the domination of the Western-backed Syrian armed opposition by extremist Salafi jihadist groups, and about the civil conflict in general.

While CNN and other outlets rely heavily on footage taken by White Helmets members, not one major Western media outlet has reported on the latest execution video starring the group’s uniformed members.

The video, which Syrian opposition activists uploaded to Facebook, shows three men from the White Helmets rushing into the center of a crowd, mere seconds after an alleged criminal was shot in the head, and removing the body on a stretcher. A member of the White Helmets can be seen celebrating along with the crowd of onlookers.

WARNING: This video features violence that may disturb viewers.

The men in the video were clearly identified by their signature white helmets, along with vests embroidered with the Syria Civil Defense logo.

The public execution took place in the small city of Jasim, in Syria’s southern Daraa province — which is often described as a hub for "moderate" rebels. Activists posted the video on May 16 on the Facebook page Coordination of the City of Al-Harra, Mother of the Martyrs, a site for the opposition in the neighboring city of Al-Harra.

Two days later, Syria Civil Defense released a carefully crafted statement admitting its members were involved in the execution. The statement noted that a tribal council in Jasim had asked the White Helmets "to humanely dispose of the body of a person that had been sentenced to death, by the local court, for murder." The group said it had "conducted an investigation" into the execution, and in response dismissed a White Helmet leader, while temporarily suspending two other team members.

This is not the first time the White Helmets have appeared as participants in a public execution.

A jarring execution filmed in 2015 in the rebel-held town of Haritan shows two members of Syria Civil Defense waiting just off camera while a member of Syria's al-Qaeda affiliate, Jabhat al-Nusra, reads out a death sentence, before shooting a man dressed in street clothes in the head. Seconds later, the White Helmets team tosses the man's body onto a stretcher and scrambles away.

WARNING: This video features violence that may disturb viewers.

The 2015 video prompted a carefully worded statement by the organization, condemning the killing and claiming its members were simply fulfilling their task by performing “the emergency burial of the dead.”

A British public relations outfit called the Syria Campaign was hired by an influential British-Syrian billionaire, Ayman Asfari, to market the White Helmets to the Western public. As Max Blumenthal has reported for AlterNet, the Syria Campaign was itself the creation of a slick New York City- and London-based public relations firm called Purpose. Among the PR group’s greatest achievements was fundraising for the widely celebrated Netflix documentary.

This year, the makers of the film were awarded with an Oscar for Best Documentary Short. As he received the honor before millions of viewers around the world, director Orlando Einsiedel read a prepared statement from Read al-Saleh, the director of the White Helmets: “Our organization is guided by a verse in the Quran: ‘To save one life is to save all of humanity.’”

But the execution videos call into question the White Helmets’ claims to act as an impartial, life-saving rescue organization, and raise serious questions about the motives of its funders and promoters within public relations firms and mainstream newsrooms.

‘Hidden soldiers’ of al-Qaeda and ISIS?

The White Helmets operate exclusively within the armed Syrian opposition, working closely with al-Qaeda’s local affiliate, Jabhat al-Nusra, and even ISIS. The British journalist and ISIS hostage John Cantlie inadvertently exposed the group’s relationship with ISIS when he referred to a White Helmets team as “the Islamic State’s fire brigade” in a propaganda video he was forced to participate in.

Videos and photos of White Helmets members posing triumphantly on the corpses of Syrian soldiers and joining fighters in accosting an alleged political opponent have circulated throughout social media.

In March 2015, the extremist-sympathizing opposition media outlet Sarmeen posted a video featuring the White Helmets gleefully joining a chant with Salafi jihadist fighters in Idlib, as they fire a fusillade of bullets into the air.

A member of Syria Civil Defense grabs a flag from one of the militants and begins waving it: a black flag with the shahada in white letters, a common Salafi jihadist symbol, emblazoned with the name of Jaish al-Sunna, an extremist Islamist militia that is allied with Syria’s al-Qaeda affiliate and that has reportedly recruited child soldiers with the help of the al-Qaeda-linked fundamentalist Saudi warlord Abdullah al-Muhaysini.

Another upload to YouTube, posted the same day by the rebel media outlet, shows White Helmets joining the extremist militants in songs and chants.

Al-Muhaysini, the ideological leader of Syria’s Salafi jihadist rebels, has repeatedly praised the White Helmets. The Saudi warlord, who has been implicated in numerous war crimes in Syria, including mass executions of captured Syrian soldiers, insisted in an interview that there is no difference between the “mujahideen” (Salafi jihadist fighters) and the White Helmets. He even favorably described Syria Civil Defense members as mujahideen. 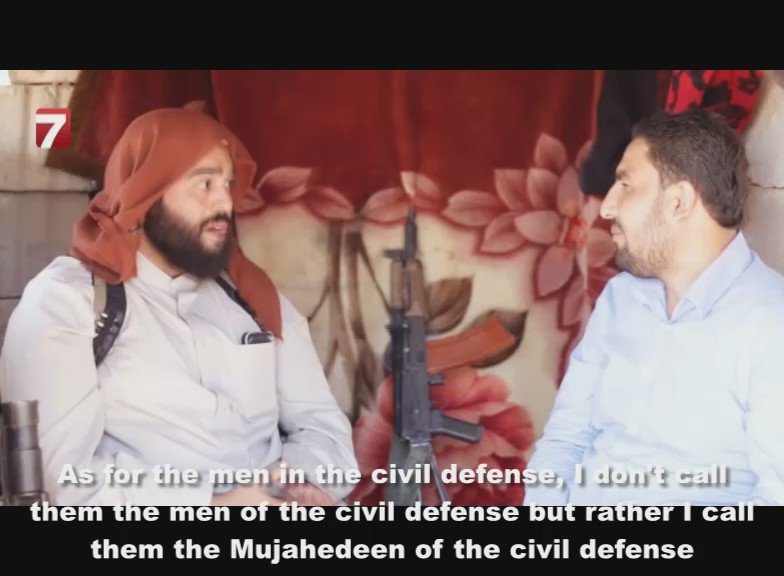 In May 2015, a White Helmets member named Muawiya Hassan Agha posted a grotesque video to Facebook (since deleted) that showed extremist Syrian rebels torturing two captured soldiers they later executed. Agha had also been filmed celebrating the capture of Idlib by al-Qaeda’s Syrian affiliate. Rumors circulated that Agha was dismissed from the White Helmets when his involvement in the atrocities came to light.
This March, a leader of Hay'at Tahrir al-Sham, the powerful newly rebranded al-Qaeda-led rebel coalition in Syria, hailed the White Helmets in a special video message as the “hidden soldiers of the revolution.”