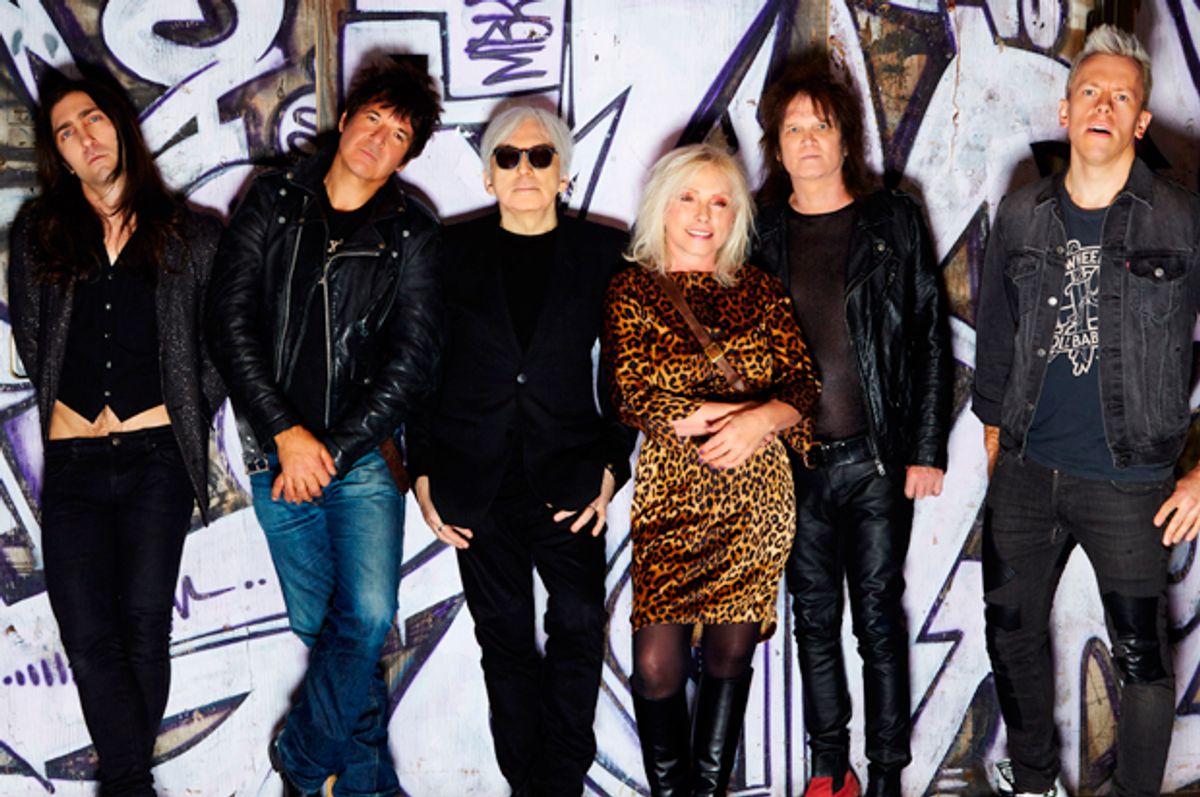 As the '80s dawned, Blondie frontwoman Debbie Harry and electro impresario Giorgio Moroder teamed up to write "Call Me." Its stomping beats and slashing guitars made for a No. 1 hit.

When Blondie set out to make the record "Pollinator," the band members again looked outward for collaborators, pulling in some of the most exciting, innovative pop songwriters working today.

As a whole, the stellar "Pollinator" captures the same sense of excitement and possibility of the group's early experimentations with the then-nascent genres of  hip-hop and synth-pop thanks in part to a collection of stellar collaborators. Blockbuster singer and songwriter Sia and Strokes' Nick Valensi co-wrote the effervescent new wave styled "Best Day Ever." Blood Orange's Dev Hynes and Harry partnered on the pulsating, disco-pop standout "Long Time," while Charli XCX co-wrote the punkish "Gravity."

The rest of those contributing to "Pollinator" are similarly A list: Legendary guitarist Johnny Marr wrote and plays on the Brit-rock-tinged "My Monster," while Joan Jett makes a cameo on the pile-driving punk-pop gem "Doom or Destroy." John Roberts — a voiceover artist and musician known for his work with "Bob's Burgers" — and the What Cheer? Brigade horn troupe add funk and pep to "Love Level," a song Harry and Blondie guitarist and co-founder Chris Stein wrote together.

In all, "Pollinator" distills so many of the styles and approaches that Blondie has adopted over the years to great effect. The electro-charged "Fun" is already No. 1 on the Billboard U.S. Dance charts, and the band is teaming up with Garbage for the Rage and Rapture tour, that kicks off July 5 in Saratoga, California. It's an inspired road pairing, as both groups boast top-notch musicianship and empowering feminist icons who are leading the charge.

Harry checked in with Salon for a brief chat about "Pollinator," her new collaborators and why she can't stop "pushing."

As a musician and vocalist, what stood out to you about the songs that were brought to the band for consideration for the record. What did you guys really want to tackle and dive into?

We wanted to have a Sia song, 'cause we admire her so much. As far as the other ones go, it just had to do with whether we liked them and felt that they would be good Blondie songs.

Dev Hynes and Charli XCX are also on the record. What stands out to you about them as songwriters?

I can't really say — I think that they have an intuition, a personal intuition and ability to touch something that is a part of them. It really comes across as being, I don't want to use the word soulful, but in actual fact, it reflects something from within themselves.

I agree with that. Everything they've done, there's a lot of sincerity. And you can tell it's coming from their heart — which is also kind of a cliché, but that's what draws me to their music too.

Yes, yes, very much so. And [there's a] Charli XCX song, I don't know if you've heard this one, it's called "Tonight." She said she wrote that when she was 15. To me, the experience and the maturity that is reflected in her lyric is really outstanding. It's not like a 15-year-old.

How did the Johnny Marr collaboration come about?

We had put out feelers, or questions or requests, through BMG, and he wrote that song for us. When I met him in London, he was talking about his kids a lot. And it's very funny, after I learned that he was very involved as a parent, I could see how he could write that song. It's very charming; it has this double meaning.

You and Chris Stein co-wrote "Love Level" together. John Roberts was on it, and then so is the What Cheer? Brigade. How'd that song come about?

I knew John from New York for years. He used to have a band called OPTI-GRAB, which I really loved. I really admired that little group that he had, it was just a three-piece, and it was very clever and beautifully written songs. They opened for us. So I've known John for a long time and then he moved to LA, he got that gig with Bob's Burgers, you know. Voiceovers. He actually helped create the character of Linda.

As far as What Cheer?, I went to an event at P.S. 21 in Long Island City; they have art events. And I went to something there, and What Cheer? banged around and played, and I thought they were wonderful. It reminded me of marching bands or parade bands from New Orleans, and I've always loved that because it's sort of loose but tight.

How did making the record in New York at the Magic Shop right before it closed influence the vibe of the record, if at all?

Well, I think that we were all moved to be a part of working there. It's such an institution in New York. Although we had never worked there previously, we knew that [David] Bowie had finished "Blackstar" at the Magic Shop, and we're all very moved and connected with him or by him, and it's just a part of recording history. Since we're such a New York-based band, to be a part of that, and to have the opportunity to record there historically is really great.

In terms of the tech part, the room is a very substantial, large room [and] has a great sound to it. It's very, very warm. And it has a great board, a famous board. It's just one of those places that doesn't exist anymore.

Blondie is touring with Garbage this summer. Have you guys talked about doing any live collaborations or anything?

No, we haven't gotten that far. And I think that we will — I hope that we will — because that would be a really, really cool thing to do. And I have sort of been envisioning how we can collateralize this thing, you know. So, it's in my mind. [Laughs.]

I really liked what you said in a recent interview about nostalgia not being really appealing to you. Especially as someone with an incredible body of music work, spanning decades, how do you balance the past with your tendency to always want to move forward?

Well, I don't really have a problem with that. I'm proud to be part of popular music, modern music, of course. But I don't know — I guess I have a strong sense of digestion. I like to hear things. I like to experience new things.

That's the kind of life that I lead: I'm always pushing. I'm pushing, pushing, pushing. And I know that there will come a day when I have to sit back a little bit and not be striving so much. But, so far, that's been my interest. I have a great band who, you know, we all share the same kind of feeling. It's exciting. It makes it very, very exciting.