It would have been easy for Trump to provide our allies a little reassurance. Instead, he confirmed their fears 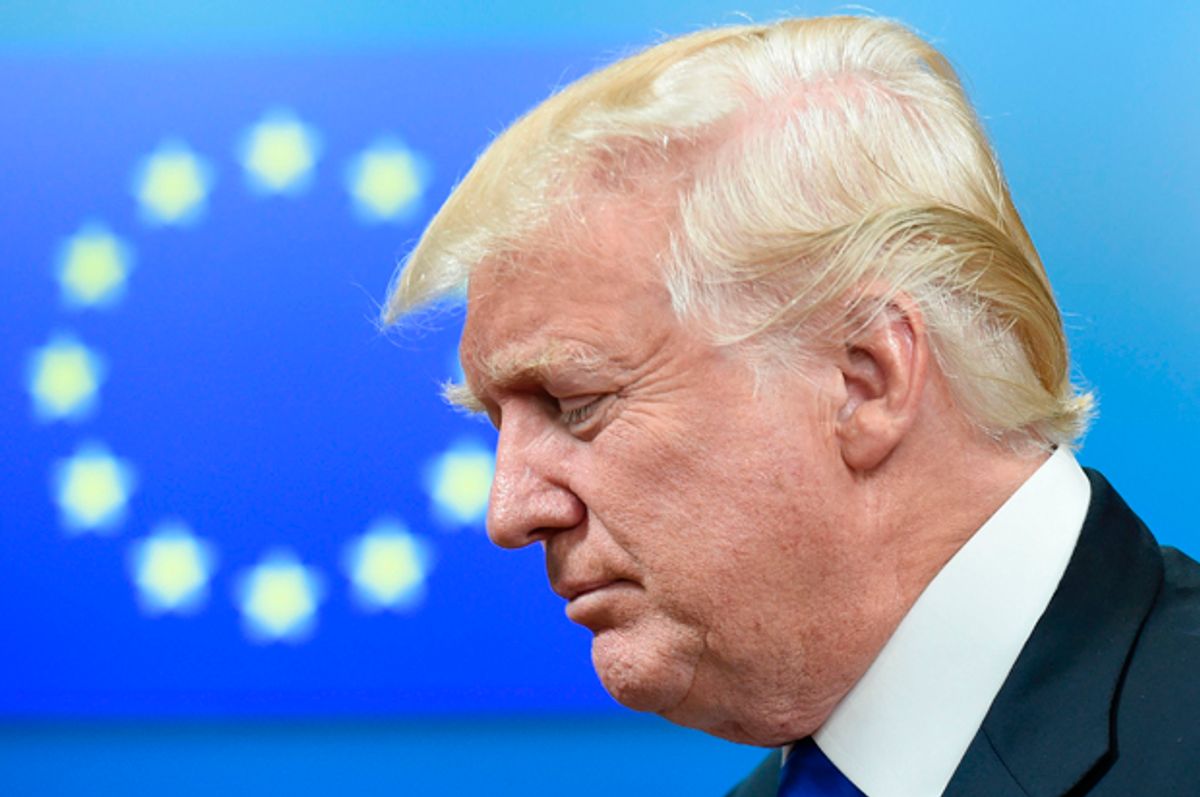 If anyone had any lingering doubts about the head-spinning rapidity with which President Donald Trump's administration has reoriented American foreign policy away from its 70 years of postwar leadership of NATO, the images and stories beamed out from the alliance’s headquarters in Brussels on Thursday should have laid them to rest.

Prior to Thursday’s meeting, NATO members had been rightfully nervous about Trump’s intentions towards the organization. The president has been bad-mouthing NATO ever since he first called it “obsolete” during the presidential campaign. Since Trump took office, he has sometimes praised the alliance in individual meetings with foreign leaders like Germany’s Angela Merkel. Other times, his praise of dictators and strongmen like Rodrigo Duterte of the Philippines has made observers wonder if he even understands America’s role as a purveyor of democracy.

It would not have taken much for Trump to soothe the fears of NATO members about his intentions. He could have taken the opportunity of a speech on Thursday to reinforce America’s commitment to Article 5, the NATO charter’s article that cements the concept of “collective defense” in the alliance by calling an attack on one member an attack on all, and obligating the nations of NATO to come to each other’s defenses.

Instead, Trump behaved like the stereotypical ugly American abroad, literally pushing the leaders of other nations out of his way so cameras could have an unobstructed view of him, and railing about membership dues like a shakedown artist demanding protection money from neighborhood merchants.

In fact, money is at the heart of Trump’s apparent problems with the alliance, which should be no surprise for a man so cheap he probably still has the first dollar he ever made screwed into a wall somewhere. His critique of NATO seemed based on two complaints: That the alliance’s military posture was not oriented enough towards fighting terrorist organizations like ISIS, and that most of the member states were not spending their “fair share” of their GDP on building up their armed forces.

On that second complaint, Trump makes a somewhat salient point. In 2006, the alliance had agreed that each member nation should aim to spend 2 percent of GDP on its military, a target number to which countries reiterated their commitment at a NATO summit in 2014. As of 2016, only four other countries besides the United States have hit that target, while the remaining 23 have not.

The U.S., meanwhile, spends around 3.6 percent of GDP on its military, a number that has actually been declining for a few years. Still, it has long been by far the largest military contributor to NATO, which is why American presidents have pushed members to up their contributions for decades.

But presidents do not usually do so by publicly calling out allies to their faces like a building contractor yelling at the guy he hired to build his hotel’s bathrooms for giving him a bad deal on tile. Which is essentially what Trump did in his Thursday speech.

This is not the behavior of a diplomat. But it is the behavior of a man who does not understand the role of alliances, or the role that NATO has played in preserving the Western liberal-democratic order in which Trump and his outsized ego have flourished since the day he was born.

That Trump would not care about NATO’s solidarity and stability is unsurprising. For one thing, he fails to see international alliances as anything but transactional. While some see a benefit to a smaller nation remaining stable thanks to America’s protection, Trump sees a freeloader who owes him money.

For another, there is the influence of some of his advisers. In particular there is Steve Bannon, who built his empire at Breitbart by railing against the international order and smearing anyone who believed in it as a globalist who did not have America’s best interests at heart. Bannon has long pushed for a more nationalist America, at the expense of a fractured Europe. That this goal aligns with that of Russian President Vladimir Putin, who rejects the postwar consensus of alliance-building in favor of an old-fashioned, great-power “spheres of influence” model, provided plenty of motivation for Russian meddling in our last presidential election.

One can always make a case against NATO, and many have. Its intervention in Afghanistan after 9/11 – the only time Article 5 has ever been invoked – has long since drifted into a never-ending occupation. Post-intervention Libya is essentially a fractured state.

But no one should be happy with a president who seems determined to unwind a 70-year alliance that, on balance, has served as a bulwark against Russian expansionism. Europe’s pre-NATO history is one of widespread warfare and suffering, and nature abhors a vacuum. No wonder our European allies are so nervous.