What if we're all complicit in Trump's Presidency?

Getting rid of him is imperative. But doing so won't prove we're no longer the country that elected him 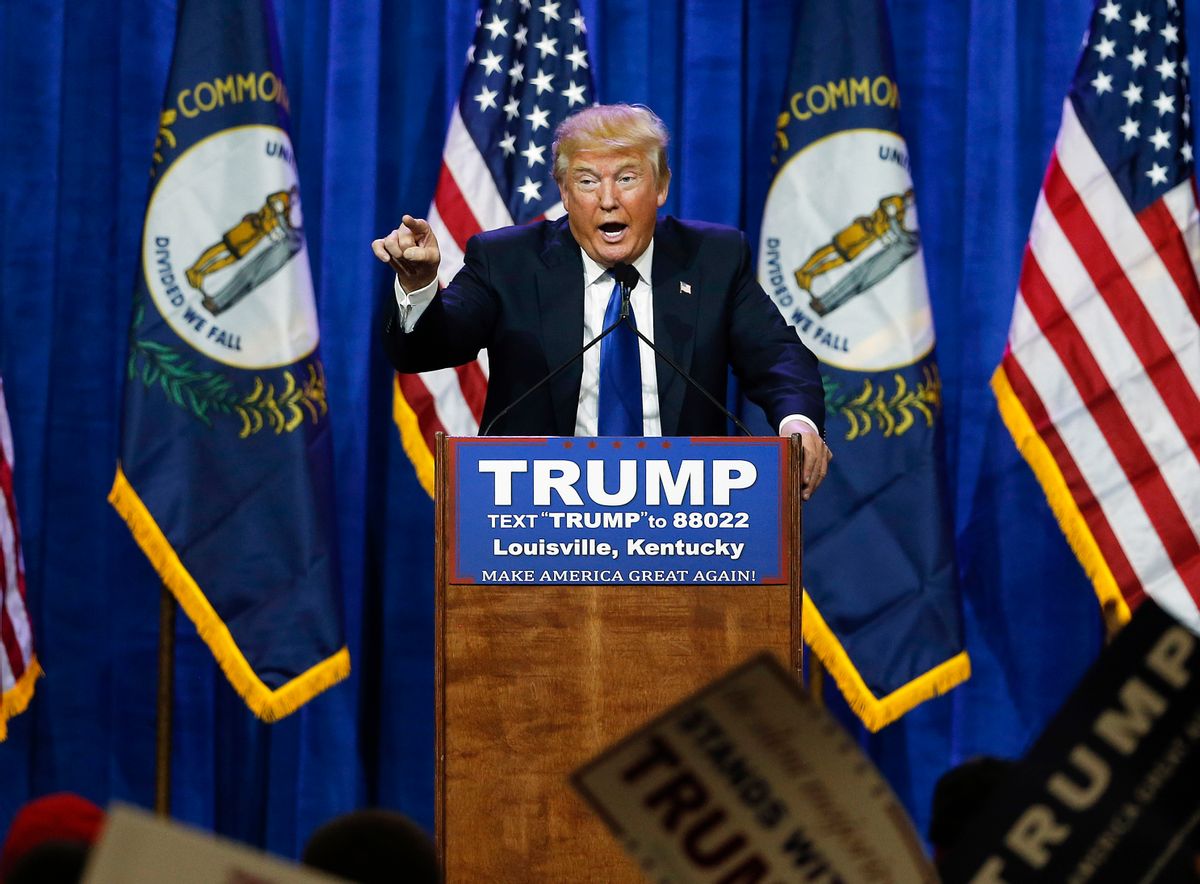 Trump isn't an aberration or an imposition on our country; he's a symptom of what’s gone wrong with it. Today's clear and present danger has been generated by a decades-old political myopia and civic pollution no special counsel or congressional investigation is likely to grasp, much less redress.

To understand what's at stake, let me step back from the scramble to "stay on top of the story" and look past Trump’s firing of FBI director James Comey and Russia’s meddling in our democracy to something that's seemingly trivial: the scourge of “political correctness” Trump and others have condemned, sometimes rightly enough, but a bit too furiously for their own good.

Political correctness has a much-longer, more revealing history than Trump and its other obsessive critics seem to know. I’m not thinking about the witch hunters of Salem, MA in 1692, but about other moral scourges who emerged in 1968, in the town of Wellesley.

In May of that year, some townspeople’s feverish determination to secure their comfortable suburb as a physically, politically, and culturally safe space prompted them to shout down and arraign teenagers and teachers who’d tried to broaden speech and “diversity” quite modestly by today’s standards. The townspeople's furious reaction to that modest effort eerily anticipated today's eruptions of “political correctness” on American campuses — mirrored them word for word, demand for demand, shunning for shunning, and punishment for punishment. The irony is too instructive to ignore.

In what became known nationally as the "Wellesley Incident," hundreds of residents assailed others who'd participated in a day-long program on civil rights hosted by Wellesley High School just after Martin Luther King, Jr’s assassination. The program included a presentation of "The Slave," a play by LeRoy Jones, with a bit of profanity and a scene where a black man nuzzles a white woman. Although most students and teachers were rapt and constructively engaged, the four-letter words and fleeting interracial intimacy were too much for a few teachers who stormed out and for many of the 1,200 townspeople who packed a subsequent school committee hearing.

When a white high school senior at the hearing confronted the program’s angry critics by repeating a line from the play with one of the offending words and telling them, “I first learned to say ‘f__k’ when I was five years old on a playground at school in Wellesley, Massachusetts,” grown men got up and shouted, “Get him!” He was dragged out and handcuffed by two police officers and charged with disturbing the peace. The district attorney also charged four adults — the play’s producer, two teachers, and a member of the Wellesley Committee on Racism — with introducing an obscene and indecent play to minors in a place of education, a crime that carried a sentence of five days' imprisonment and a $5,000 fine.

The charges against the student were dropped after he wrote an apology, and a judge dismissed the charges against the adults. But no one who has videotaped, criticized or armchair-psychoanalyzed today’s politically correct demands for “safe spaces,” “trigger warnings” and “disinvitations” of controversial speakers can deny that the town of Wellesley experienced a politically correct rampage nearly half a century ago.

If any more evidence is needed, in 1971, David and Holly Franke, the latter a former Wellesley resident, published a book touting communities that protected residents from what the authors characterized as dangers coming from a country on the verge of “a real breakdown.” Wellesley received a laudatory listing. The book’s title: "Safe Places".

There is one glaring difference between then and now, and it gets us closer to Trump and his mobs: In the Wellesley Incident, it was conservative adults who demanded safe spaces and tried to suppress the repugnant speech and offensive ways of black actors and the “liberal” white students and teachers who applauded them. And some of the conservative adults' targets — the dreaded “hippies” and “radicals” — were trying to open things up, not shut them down, although many of their efforts later soured and collapsed nationally under enormous pressures, including being shouted down and beaten or literally shot down.

Today, by contrast, it’s self-avowedly progressive students, some of them black, at Middlebury, Yale and other colleges, who've shouted down and tried to punish conservative white adults for expressing views these students and some of their mentors find so repugnant. Like Wellesley’s would-be protectors of half a century ago, they’ve tried to prevent others from hearing them.

These identical responses from such apparently different cohorts carry an important lesson. Although the 1960s young radicals and hippies and today’s politically correct zealots have often been wrong and sometimes destructive, their most obsessive critics, the self-styled defenders of civic comity and virtue, have been even more tragically wrong in mistaking a virulent symptom — the protests of the disaffected young — for the disease. This has prompted not only the protests but massacres in schools, police militarization and shootings of unarmed young men, white working-class opioid addiction, gladiatorial sports, degrading entertainment, and in response, elaborate home-security systems, students carrying guns legally at the University of Texas, and palliatives and escapes that leave many people too weak and isolated to react except in politically correct or authoritarian mobs.

What's really driving our derangement is not occasionally ridiculous, destructive displays of righteous anger but the market-driven distortion of our civic-republican wellsprings and of our young people’s rites of passage to adulthood. That disease has been metastasizing in our body politic for decades at an accelerating pace that culminated in Trump's vulgar, violence-invoking presidential campaign, and now, in Trump's presidency. But its first tremors were evident long ago in assaults on civic culture, not by politically correct disciplinarians, whether in the town of Wellesley or on college campuses, but by market forces to which they were reacting.

A strong civic culture needs a “cultic” dimension that taps into communal and personal histories and generates rich myths or narratives — even more potent than "Harry Potter" or "Lord of the Rings" — that inspire the young in their most impressionable, formative moments. It also needs rites of passage, tests of prowess and dedication to the community that are decisive enough to mold youths’ rising, unfocused strengths under the eyes of wise elders who ratify them as members of an intergenerational community.

When kids can’t find credible myths and rites, they can’t help but let us know it. Some try to concoct their own rites, tattooing or cutting themselves. Others try on garments of ethno-racial solidarity, sectarian purity or imperious political correctness. Still others flock to leaders who promise to help them meet society’s daunting challenges. When young Americans shouting, “Yes we can!” swarmed Barack Obama in 2008 and cheered Bernie Sanders in 2016, the glow of delight on their faces was anthropological even more than it was electoral.

But so was the electric charge on the faces of young Americans shouting, “Build the wall!” as Donald Trump vowed to restore their stolen cultural belonging by channeling a million silent humiliations and hurts into torrents of rage against scapegoats who weren’t nearly as destructive of civic culture as Trump himself has been. (When a vibrant civic culture falters, a Steve Bannon enters.)

The cause of the crisis is that our leaders, officially or by default, have abandoned and contracted out the design and delivery of our civic narratives and rites to anonymous whorls of investors who are driven algorithmically by civically mindless marketing to offer the young "violence without context and sex without attachment,” as Senator Bill Bradley put it in 1995.  Along with tech-driven tsunamis of empty information, chillingly intrusive surveillance traps us like flies in a spider’s web of 800-numbered, sticky-fingered pick-pocketing machines whose purpose is to foment impulse-buying, not to nurture vigilant citizens.

True, our republican narratives and rites of passage have never been as pure as Henry David Thoreau demanded in 1849, when he wrote "Resistance to Civil Government (Civil Disobedience)", only 12 miles from Wellesley, inspired by his disgust with slavery and the Mexican-American war. At other times, our civic myths have been as harsh and hypocritical as Salem’s witch-hunters made them. Our public spirit may have been best represented by any Jack Nicholson movie character’s juggling of democratic fakery and faith, of blustery self-aggrandizement, sneaky self-service, and showy “generosity.”

But by now the accumulation of civic implosions since the Wellesley Incident in 1968 has deflated even Nicholson’s wickedly funny juggling as a believable portrait of our civic life. Scourges of political correctness have become codependent with their targets as the walking wounded of a deeply unjust civil order. In his 2016 campaign, Trump cynically ratcheted up the co-dependency of the politically correct and their obsessive critics by joining the latter’s outcry against campus cry-bullies. So doing, he only reinforced both the targets’ and their critics’ self-righteousness.

Wellesley’s conservatives had at least one good argument on their side: They understood — as conservative Republicans no longer seem to — that what the First Amendment quite rightly protects in provocative free speech, a good civil society quite rightly modulates to keep a cacophonous free-for-all from imploding into a brutal free-for-none. But Wellesley’s tribunes of public virtue carried their point too far against playwrights and students who were only trying conscientiously to find the right balance.

Those who double down similarly now on denouncing feckless liberals’ and radicals’ excesses may really just be doubling down on denying their own complicity in what’s destroying all boundaries: not “totalitarian” kids but omnivorous markets. Trump and other would-be tribunes of American greatness have come to resemble Captain Renault from the movie "Casablanca," who was “shocked, shocked” to find gambling in the café, even as he served a system whose force and fraud made that vice all but inevitable.

Let’s all stop claiming to be “shocked, shocked,” that many Americans are frightened and angry that a regime of casino-like financing, predatory lending, intrusive, addictive consumer-marketing has chosen as its president a financer of casinos and a predatory self-marketer whose only country is himself and whose fellow Americans aren’t sovereign citizens but props on his stage. We need to re-weave rites of passage that can’t be strip-mined for quick profit. We need to replenish narrative wellsprings that won’t be drained by forces more powerful than a high school program or a college student screaming at a professor.  Our current legal and constitutional crisis is urgent, but the future of the republic depends on what happens to the swift, dark undertows that swept Trump to power in the first place.