It's not just Bernie: Socialism is back, and right-wingers have good reason to worry

Decades after socialism became a death zone in American politics, its surprise comeback has conservatives scared 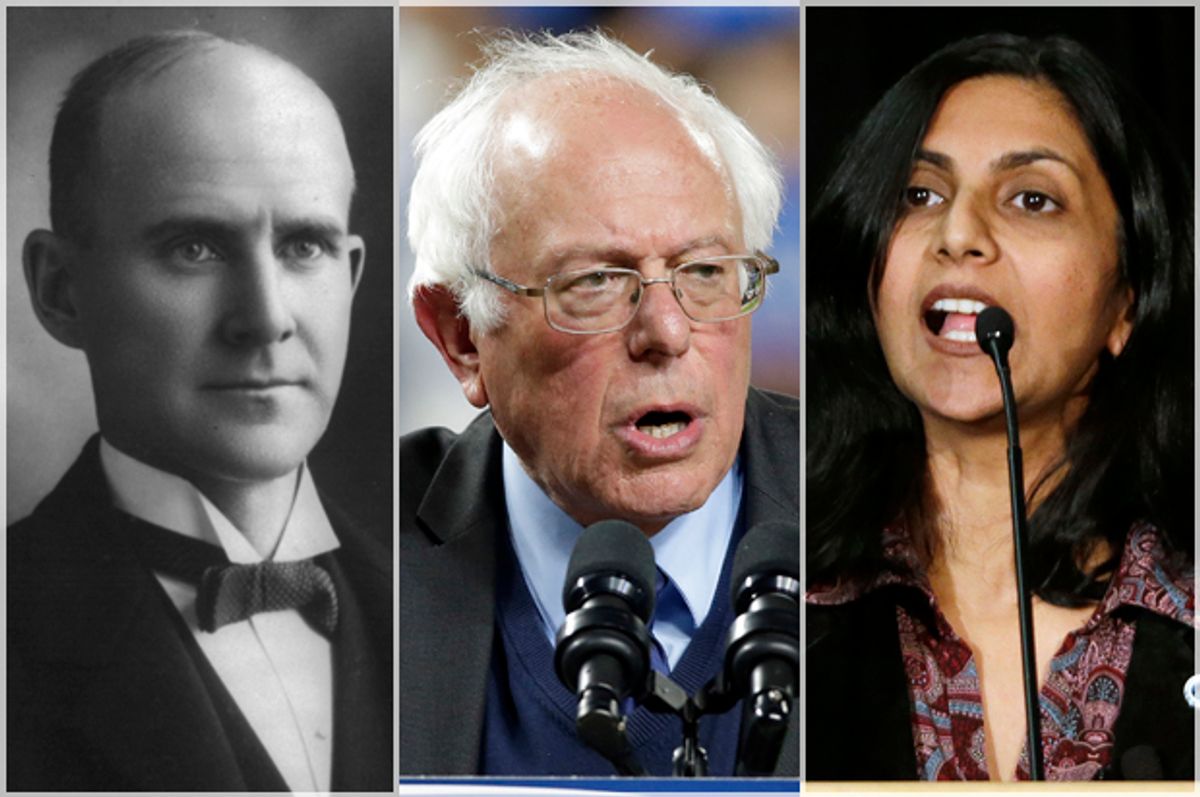 In a McCarthyite screed that appeared in the pages of National Review last March, the CEO of the Christian Legal Society, David Nammo, ominously warned the conservative publication’s readership about the growing popularity of socialism, and how this apparent shift in opinion is “threatening America’s future.” Recent polls, Nammo points out, have indicated that an increasing number of Americans — nearly four in 10, according to one survey — have come to prefer “socialism” over “capitalism.”

The clearest sign of this shift, of course, was the surprisingly successful presidential campaign of Sen. Bernie Sanders, a self-proclaimed democratic socialist who currently ranks as the most popular politician in America. Nammo correctly observes that Sanders’ popularity is “not the cause of this movement in public opinion but rather an indicator of it,” but then goes on to provide his own predictable, eye-roll-inducing theory:

It is obvious where such thinking abounds and continues to spread: in our colleges and universities. The ideologies of professors and educators have proven stronger than facts … A generation has been taught a lie, and they now believe it.

Those pinko professors are at it yet again, corrupting our youth! This theory is not too dissimilar from the “Cultural Marxism” conspiracy theory peddled in alt-right circles, which propounds that a group of relatively obscure 20th century intellectuals from the Frankfurt School, beginning with Theodor W. Adorno and Herbert Marcuse, developed a secret plot to undermine Western civilization by spreading political correctness and anti-American prejudice in academia. Intellectuals and college professors often make perfect scapegoats in the conservative movement, which has always been deeply anti-intellectual; it is standard right-wing rhetoric to blame higher education for the socialist specter haunting their dreams.

“Many Americans,” continues Nammo with a melodramatic intensity, “have forgotten the lessons of the Cold War and the disasters witnessed in the crumbling economies and failed polities of Communist and socialist countries in the 1990s … Americans who believe in limited government, welfare reform, and states’ rights should look over their shoulder and realize that a dangerous ideology is gaining ground.”

Of course, this “dangerous ideology” does not advocate anything resembling the totalitarian doctrines of 20th century communism. If anything, democratic socialism — an anti-authoritarian philosophy that promotes political and economic democracy — is the antithesis of Soviet-style communism, a left-wing authoritarianism that replaced one ruling elite (the capitalist or landowning class) with another (Communist Party bureaucrats). Alas, intellectual honesty is not typically associated with anti-socialist diatribes found in a magazine whose senior editor is the author of a book titled “Liberal Fascism.”

In a Huffington Post article last week, for example, Eliot Nelson reported that socialism has become increasingly popular — especially among millennials — since the Sanders campaign last year. The Democratic Socialists of America  (DSA), a minor presence on the American left for several decades -- its roots go back to the old Socialist Party of America, once led by Eugene Debs and Norman Thomas -- has experienced a rapid membership growth in 2017. “DSA openly uses the big, bad, scary s-word that countless Republican consultants have used to smear Democrats over the years,” writes Nelson. “And despite decades of efforts to stigmatize it, socialism is kind of in right now.”

Nelson reports that the DSA has seen its membership grow from about 8,500 on Election Day to 21,000 at the start of May, and they are getting “upwards of 10 requests a week to help open new chapters.” Like the Sanders campaign, the DSA receives its strongest support from tech-savvy young people, who are most likely to embrace the socialist label.

A conservative like Nammo would obviously take this to mean that our colleges and universities are indoctrinating the impressionable youth with socialist dogma, but there is a much more sensible and persuasive explanation for this socialist appeal. (Incidentally, conservatives always seem to overlook the influence of business and economics departments in American universities, which overwhelmingly lean to the right.) It goes something like this: Millennials are drawn to socialism because they have been royally screwed by the capitalist economy and the corporate state.

Consider a few facts: Young people have the highest student loan debt in history; they face increasingly bleak job prospects for the future (according to various studies, up to 50 percent of American jobs are at high risk for automation over the next two decades — including some white-collar jobs); they will likely be the first generation to be worse off than their parents; they grew up during the Great Recession and live in a time of surging economic inequality; and the future of their planet is threatened by ecological disaster. In other words, capitalism doesn’t seem to be panning out for the younger generations.

Of course, working-class and middle-class people of all ages have suffered over the past few decades. Wages have stagnated for the majority of workers (even as productivity rises) and many middle-class jobs have been outsourced or automated — all while the richest people in our society have grown ever richer and CEO salaries have skyrocketed.

The appeal of socialism is not limited to young people or liberal Democrats. Indeed, while only a minority of Americans — albeit a pretty sizable minority — claim to prefer socialism over capitalism, a majority support policies that the writers at National Review would doubtless consider “socialist.” Universal or single-payer health care, for instance, is now supported by about 60 percent of Americans, according to polling — including a substantial number of Republicans. “In early April, an Economist/YouGov poll showed that 60 percent of respondents supported a ‘Medicare for all’ system, including 43 percent of people who identified as conservative and 40 percent of Trump voters,” notes Theo Anderson in In These Times. “The energy behind single payer is partly a result of the GOP’s success in pointing out the flaws in Obamacare, then failing to offer a workable alternative.”

This brings us to the S-word itself. Like most political buzzwords — be it fascism, freedom, democracy or patriotism — socialism has come to have many different meanings depending on the speaker. For Bernie Sanders and other democratic socialists, it denotes democracy and economic justice; for a Fox News commentator, it means whatever he or she damn well wants it to mean (one day it stands for totalitarianism and tyranny, the next day it means Keynesian economics, and the day after that it's just a meaningless pejorative unthinkingly hurled at opponents).

But if we are discussing the American activists and politicians who actually identify as socialist or democratic socialist — most prominently Sanders, but also Seattle politician Kshama Savant and card-carrying DSA members, for example — then the rise of socialism in America is more of a return to New Deal-style social democracy than anything else. Though the media regards Sanders as something of a radical, he is not much further to the left (economically, at least) than one of America’s most celebrated presidents, Franklin D. Roosevelt. As the Vermont senator sarcastically told audiences on the campaign trail last year, Republican President Dwight Eisenhower — under whose administration the top marginal income-tax rate was above 90 percent — was arguably more of a socialist than he is.

The DSA, which is committed to worker ownership of capital and the "means of production" -- largely meaning the establishment of worker-owned cooperative businesses, not the expropriation of private property -- is undeniably further to the left than New Deal liberals. But it could hardly be called a politically extreme or revolutionary group.

It is hardly factual, then, to say that a “dangerous” new ideology is gaining ground in America -- unless one is describing the rise of the alt-right and white supremacy. Rather, a long-established political tradition is returning to prominence after many decades in the wilderness, in response to an unsustainable economic system that has generated vast inequality and injustice. Young people are at the forefront of this movement not because they have been brainwashed by bearded commie professors, but because they are the ones who have to live in the future that is threatened by capitalism today.