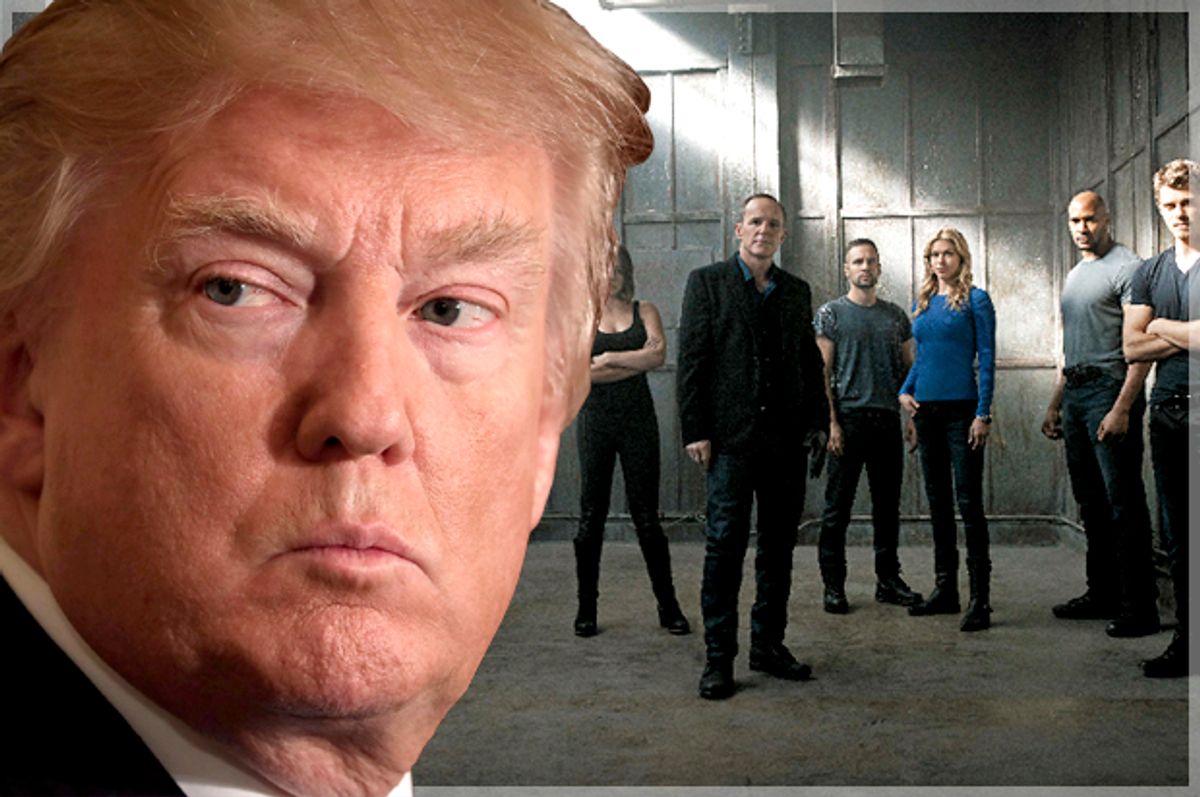 It feels like years and years, but the grim reality is that we've only been living under the presidency of Donald Trump for about four months now. There really hasn't been time for most of pop culture to react to this new reality. "The Handmaid's Tale" seems timely, but that adaptation of Margaret Atwood's 1985 novel was planned and scripted long before we had to grapple with the reality of the Trump administration. Shows like "Veep" and "House of Cards" may be about politics, but they are geared more toward escaping our reality than reflecting it.

But there is one truly remarkable exception to the rule: Marvel's "Agents of SHIELD," which concluded its fourth season on May 16. While there's no doubt the general outline of this show about superheroes and spies was laid down before the results of the November election, the writers and producers did a remarkable job shaping the latter half of this season into a horror-show mirror of what it feels like for liberals living in Trump's America.

For those who have not followed the convoluted comic book plot of the show, here's about as simple a summary as I can offer: The agents of SHIELD, a fictional intelligence service from the Marvel universe, are trapped in a computer-generated alternate reality created by an evil robot whose AI has been advanced beyond all human understanding by magic. Most of the heroes don't even have a memory of their real lives and don't realize the world they're living in is fake. To make things worse, in the fake world, the government is run by Hydra -- SHIELD's longtime nemesis -- a covert operation created by the Nazis and run by people plotting to restore fascism.

Waking up one day and finding you live in a parallel dimension where the Nazis are in charge is a pretty close metaphor for how liberals feel about living in Trump's America. (For months now, dark jokes about the alternate timeline, where Hillary Clinton won, have been valuable retweet currency.) There's clearly a similar theme at work in the Amazon series "Man in the High Castle," but that one also predates Trump and is set in an alternate-history version of the 1960s.

What made this season of "Agents of SHIELD" even more fun is the way the writers decided to lean hard into that metaphor, making sure to litter the dialogue with knowing winks at Trump-era controversies along the way.

The show follows the path of two agents, both young women, who are aware they are in a simulation and who are trying to get everyone else on their team to believe them. The sense of unreality they experience as they go about this task, all while trying to escape simulated Hydra agents, uncannily mirrors the disassociation that many liberals feel these days. That the two woke agents are female feels like a deliberate call-out to the Women's March and the way that the resistance — which also happens to be the name of the anti-Hydra movement on the show — has been led primarily by women.

We quickly learn the reason that Hydra is in charge in the simulation: The group was able to exploit the public's fears of Inhumans, a recently discovered race of people who have hidden superpowers, and have been put in charge based on their promises to corral and eliminate these unwanted people. Needless to say, this directly parallels the way Trump was able to ride a wave of anti-immigrant sentiment into power, and sure enough, most of the Inhumans are like most immigrants: Innocent people who are getting blamed for the bad actions of a few.

The writers gleefully hang a lampshade on what they're doing multiple times. When a student in a classroom asks about Hydra's Nazi origins, the professor dismissively writes that off as leftist propaganda. But one of the two aware women, Jemma Simmons, later tells the student that Hydra is a Nazi organization.

"Every last one of them," she says. "And don't you let anyone forget it." The warning is clearly as much to the audience, reminding them not to forget exactly what kind of authoritarian monster has been put in the White House.

In another episode, an evil Hydra scientist describes his attempts to extract information from the other woke character, Daisy Johnson, by complaining, "She was beaten within an inch of her life. Nevertheless, she persisted," echoing Mitch McConnell's instantly famous line about Elizabeth Warren.

The writers have sprinkled in other Trump-era jokes, having characters complain about Hydra propaganda with terms like "fake news" and "alternative facts" as well.

Despite the jokes, the simulation plot was incredibly poignant. The characters are stuck in the simulation for a surprisingly long six-episode run, giving the audience enough time to start worrying about the fate of this fake world and the simulated people in it.

Perhaps the most unnerving story line involves what happens to Leo Fitz, who is a scientist and Jemma's boyfriend outside the simulation. Inside the simulation, however, he is a leader of Hydra and a soulless fascist — the same man who utters the "Nevertheless, she persisted" line on the show. Over the course of the simulation episodes, Jemma tries repeatedly to get through to him, to find the sweet man she loves in the real world underneath his cold exterior. Eventually, however, she and the audience realize that the Fitz she knows doesn't exist at all in this world. He really is the bad guy, through and through.

This particular plot strand captured very well the feelings so many liberals have about their loved ones who voted for Trump: The fruitless efforts to get through to them, the yearning to hear them apologize and the growing and terrible realization that these people you loved and thought you knew might actually hold the terrible views that they voted for.

Of course, unlike in the real world, the heroes are able to escape their uncanny world run by fascists. Unlike real-life Trump supporters, Fitz eventually wakes up and regrets his choices. The good guys win in the end and the evil alternate timeline disintegrates. Our world is not a TV and, unfortunately, the bad guys are still in charge. But for that lovely six-episode run, it was nice to imagine that the horrors we're experiencing every day aren't the real world, and that if we search long enough, there might be a portal to a better one where Hillary Clinton is our president.