We all have a Mystery Crank: "Kimmy Schmidt" Season 3 and feminism

"A person can stand just about anything for 10 seconds." It's how women endure endless abuses 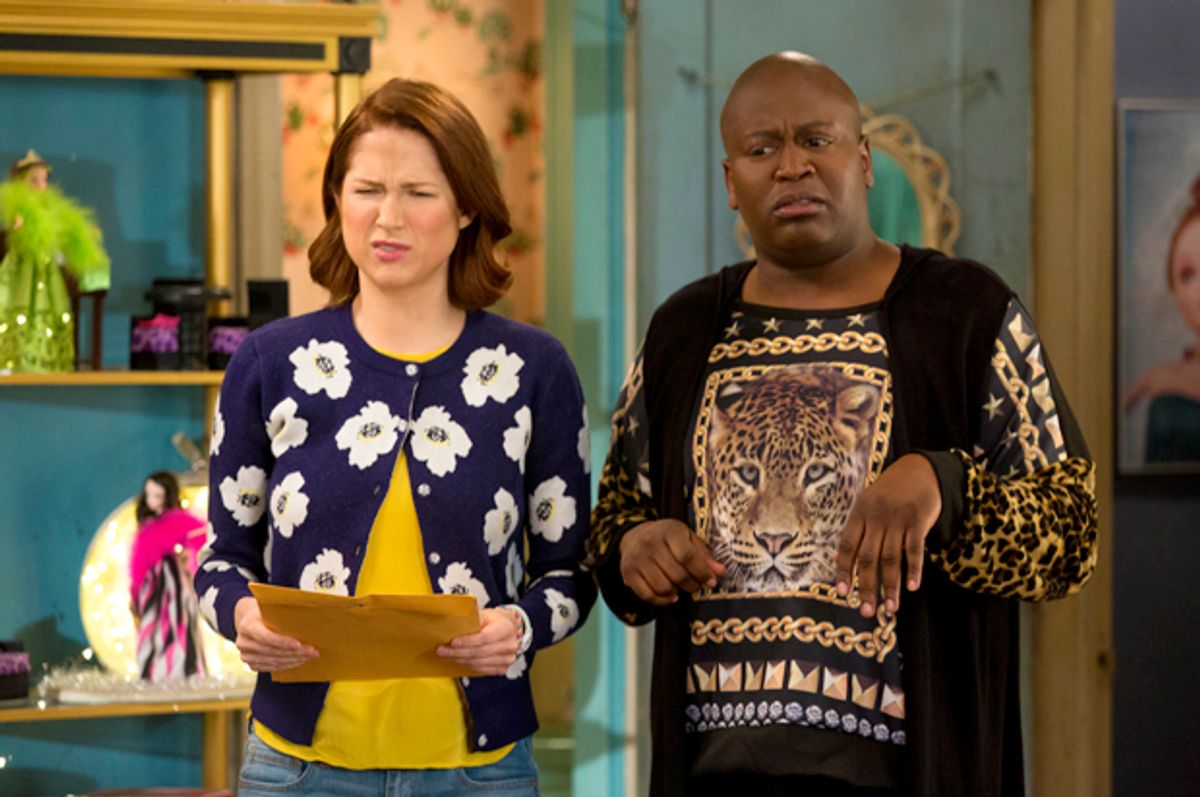 One concrete detail about “Unbreakable Kimmy Schmidt” explains the secret of the title character’s relentless optimism and surprising physical strength: the Mystery Crank.

Viewers learn about the crank early on in Season 1 during a flashback to Kimmy’s captivity in Rev. Richard Wayne Gary Wayne’s bunker, home of his Spooky Church of the Scary-Pocalypse. The cult leader ordered Kimmy and her bunker mates to work the crank at regular intervals, but never told them what it did or why they had to do it. Turning the Mystery Crank was physically exhausting, Kimmy explains, but it also taught her a lesson.

“I learned a long time ago that a person can stand just about anything for 10 seconds, then you just start on a new 10 seconds,” she says. “All you’ve got to do is take it 10 seconds at a time.”

That philosophy enabled her to survive horrific abuse that’s only implied in “Unbreakable Kimmy Schmidt” and never shown. Learning the truth behind the Mystery Crank at the end of Season 1 wakes Kimmy up.

Kimmy discovers during a return visit to the bunker that the crank is connected to an underground generator that powered the faux-reverend’s man cave, where he played video games, vegged out in front of the TV and filmed videos of himself to submit to reality shows. On top of every other physical and psychological degradation Kimmy and the women endured at the hands of the reverend, their sweat facilitated his “me” time.

As the full realization of this bears down on Kimmy, something extraordinary happens. She puts her sunshine-bright smile aside for a moment and becomes genuinely angry. Not frustrated. Not broken — angry.

And something turns in Kimmy Schmidt, the character (played with an innocent brilliance by Ellie Kemper), and “Unbreakable Kimmy Schmidt” itself. Series creators Tina Fey and Robert Carlock ensure that the character’s optimism prevails, but it’s her anger that helps Kimmy to put the man who stole her childhood in prison.

The Mystery Crank is a metaphor for endurance in “Kimmy Schmidt,” and one I’ve heard referred to by a number of its fans. Endurance is a virtue, a symbol of strength. And the endurance that Kimmy built over years of crank duty has a positive payoff in this third season, as a casual demonstration of upper body strength floors members of Columbia’s crew team. In a turn of events that would be implausible in just about any other show, Kimmy earns a sports scholarship to Columbia University. More than anything else, Kimmy just wants to move on with her life.

To Fey and Carlock’s credit, this does not last. Kimmy isn’t dumb, but she’s not exactly ready to ace the SATs either. Besides, as cartoonish as “Kimmy Schmidt” can be, real-world rules still apply.

And that truth is abundantly apparent in this third season, as Kimmy comes to understand the ways in which women have been conned into enabling structural misogyny by cloaking it in “whatever-wave-this-is” feminism. Metaphorically speaking, Kimmy has let go of the crank only to realize that women everywhere are smiling through their own misery generation systems, a few moments at a time.

Kimmy sees this when she and her roommate, Titus (Tituss Burgess), meet Laura Dern’s character, Wendy, the fiancée of Richard Wayne Gary Wayne (Jon Hamm). Wendy mentions she holds multiple postgraduate degrees as casually as she reveals that a past lover used to throw cereal in her face when he became angry.

“I know what I’m getting! ... I’m in control for once,” she tells Titus through that too-bright smile Kimmy used to wear. Explaining the terms of her relationship with Kimmy’s still-incarcerated victimizer, Wendy explains, “We only get to see each other an hour a week! But that’s why this is going to work! If we only see each other one hour a week, he’ll never realize what a useless piece of crap I am and he’ll love me forever. And that’s what I deserve!”

Yes, endurance is a virtue, but it’s also a trap.

“Unbreakable Kimmy Schmidt” reveals bolder levels of commentary with each passing season, but the way in which it tackles Kimmy’s awakening to feminism is fascinating because of its depressing honesty. Through Kimmy’s experience, the show’s producers confront what feminism means in 2017:  The show exists at a time that women are witnessing their health and reproductive freedoms being stripped away.

Even a woman’s basic safety is under attack by a government headed by a man who bragged about groping women’s genitals during his campaign — and was elected anyway, in no small part because he won over 53 percent of white women who voted. Ours is an era in which the rich daughter of this would-be autocrat sells herself to millions as a feminist businesswoman as opposed to the beneficiary of nepotism and corruption — and, sadly, many are buying.

It is no mistake that this is the season in which Kimmy finally uses the world “rape” to refer, in a sideways fashion, to what happened to her in the bunker. Blithely attempting to frame her twisted romance with the reverend into something palatable, Wendy tells Kimmy, “It sounds like a Noel Coward play!”

“If Noel Coward was really a coward who rapes everybody,” Kimmy flings back at her.

Thus when Kimmy goes out with her new college pals dressed in a too-tight, skin-baring dress and boots straight out of the pre-makeover scenes in “Pretty Woman,” it’s painfully on the nose. “Being empowered sure is cold,” Kimmy complains. A fellow coed replies, “This is what our foremothers fought for!”

Even worse, Kimmy’s fellow recovering captives still have at least one hand on the old crank. Ex-bunker sister Gretchen (Lauren Adams) attempts to start her own cult this season and discovers why there aren’t female cult leaders lording over harems of young men – guess why that doesn’t work?

Cyndee, meanwhile, is cashing in on her Mole Woman identity by lending her endorsement to a company that manufactures bunkers.

In keeping with the show’s satirical spirit, Season 3 of “Unbreakable Kimmy Schmidt” isn’t brutally indicting of Kimmy’s undergrad friends, or Wendy, Cyndee or Gretchen. Neither does it offer up any character as being right, or better, than any other. Instead, the story speaks to the clumsy and confused reasoning ensconced within the culture’s nascent efforts to enact some new version of political consciousness.

Kimmy’s realization about her fellow coed feminists is that they’re all simply children trying to figure out the world, just like everybody else. Her fellow survivors, and Wendy, the woman offering herself up as the reverend’s new emotional captive, are only clinging to flawed logic because other people drilled into them that doing so is the only way to feel safe. Letting go of the crank is hard.

Nevertheless, as the show’s title implies, Kimmy is steadily realizing that everything that happened to her has given her the fortitude to move on. In that sense, Season 3 may be the series’ most hopeful yet. Kimmy doesn’t save the day in the way she has in past seasons, but in the end she saves herself by discovering, by accident, where her strength lies. And it’s not in the hands of others or by presenting a pleasing front. Instead, she finds her next step by being the person she’s always wanted to be.

And the season’s final line may be one of the year’s most inspiring takeaways, perhaps even a worthy replacement for the Mystery Crank analogy: “Don’t try to stop me,” Kimmy says, “because I never will!”