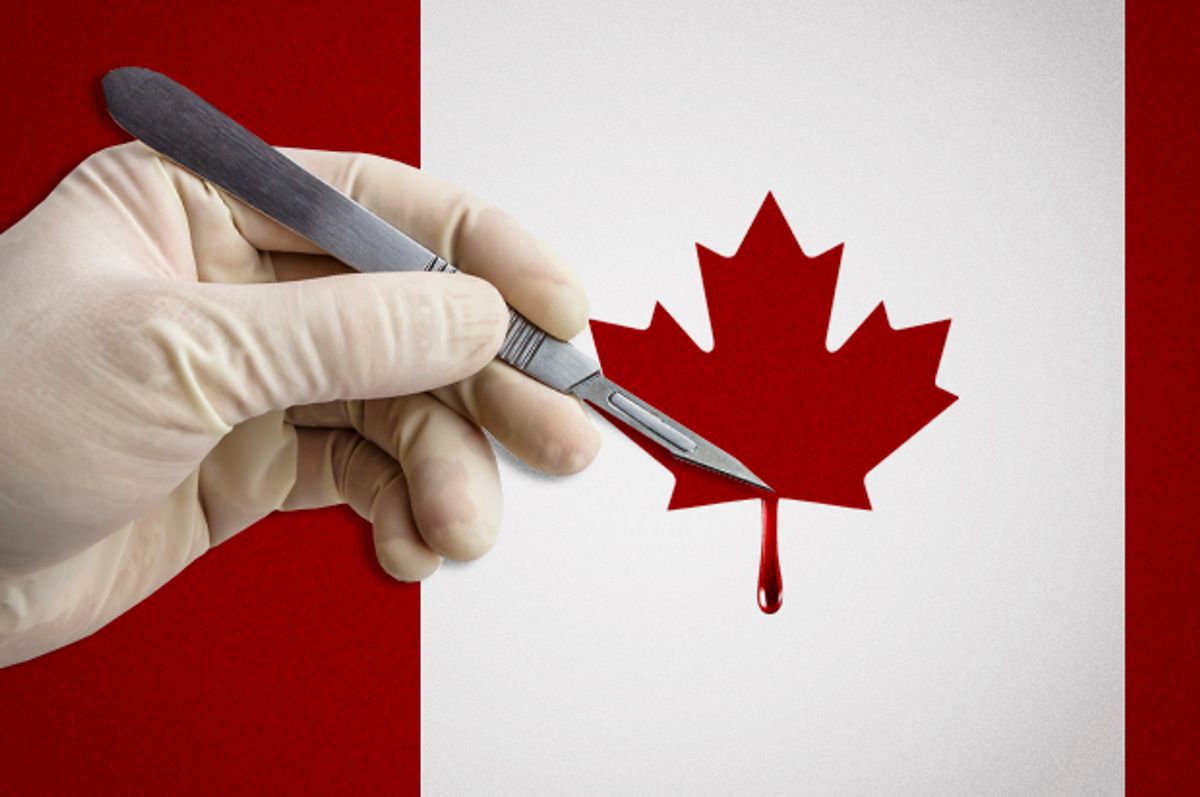 President Donald Trump has been pushing hard, along with Republicans in Congress, to eliminate former President Barack Obama’s Affordable Care Act. But as he and leaders of the Senate and House struggle to come up with some alternative health care law, they might ask themselves why large companies like General Motors, Ford and Chrysler (now Fiat Chrysler) over recent decades have shifted roughly half their car and truck production — and the jobs that go with them — across the Detroit River into Canada.

Here's one big reason they did it: Canada’s government-run single-payer health system, known as Medicare -- to be clear, not the same Medicare as the American health care system for senior citizens -- lowers those auto companies’ health care costs from more than $15,000 per worker in the United States to just a few thousand dollars in Canada, with all Canadian taxpayers, not just employees and their employers, picking up the tab.

Canada’s health care system, since it was established in 1968 and became fully implemented by the provinces in 1971, has functioned as a government insurance program for negotiating fees to and then paying physicians, hospitals and other health care providers. Funded broadly by individual and corporate taxpayers, the tax burden on Canadian employers for Canada’s Medicare system works out to about $1,000 per worker per year and several thousand more per family.

Although few if any executives of large firms in the U.S. have advocated a similar single-payer system here, executives of Canadian subsidiaries of those same companies not only say they like the system, but enthusiastically make use of it not just for their workers, but for themselves and their families. In fact, a decade ago, those executives of U.S. Canadian subsidiaries joined with executives and union presidents of Canadian-based firms to lobby the Canadian government to expand and increase funding for Medicare, seeking to have it cover long-term care, dental care and drugs.

At that time, Steve Low, a spokesman for GM Canada, explained, “Both the U.S. and Canadian systems have their challenges, and Canada's system clearly needs some improvement, especially in the form of higher investment, but in general, Canadians have ready access to health care. I can walk into any ER and get treated quickly. My kids are active in sports and when they get hurt they always get treated right away."

Russ Hunt, financial director of Costco Canada, says today that having employees covered by Canada’s Medicare program is a tremendous savings for the firm’s Canadian unit, compared to its parent company in the U.S., where Costco has a reputation as an “enlightened” employer offering good benefits. In an interview, Hunt hastened to add that even in Canada, the company has to turn to private insurers to provide its workers with supplemental coverage beyond just doctor and hospital.

At the same time he was quick to praise Canada’s system, which he says he and his family rely on, as do most corporate executives in Canada. He reported that wait times are generally not a problem, and says care is good. “We don’t see our employees taking leaves to travel to the U.S. to get medical treatment,” he laughed. “The only real issue I see is that people are afraid to travel south to vacation in the U.S. because of the high cost of temporary travel insurance needed in case they get sick or injured while visiting. Especially if they have pre-existing conditions, when it can be really prohibitive.”

Hunt scoffed at claims made by some American free-market health care advocates that Canadians don’t like their single-payer system. He noted that the Canadian system has survived many decades of conservative government at the national and provincial level, and has never been seriously threatened. He explained this broader support across party lines compared to the situation in the U.S., where even the relatively modest ACA reforms pushed through by President Obama are now under threat by Republicans: “In Canada we have the attitude, liberals and conservatives alike, that everyone should have the right to affordable medical care.”

Nobody would call Francis Buckley, a professor of contract law at George Mason University in Virginia, a liberal. A Canadian by birth who became a naturalized U.S. citizen a few years ago, Buckley is a senior editor of the conservative American Spectator magazine, and was an occasional speechwriter for Donald Trump last year during the presidential campaign. But he also supports the call by Physicians for a National Health Program, an advocacy group that has long been pushing for establishment of a single-payer health care in the U.S. Buckley said, “My experience with Canada’s health system is that it works very well, and at about half the cost per person of the U.S."

He continued, “My mother passed away in Canada three years ago at the age of 104. Toward the end she had a number of falls and when that happened, they’d take her in to the local hospital to check her out each time. Often they’d be not happy with her kidney function or some other thing, so they’d keep her there a while and fix her up. To me, the hospital appeared to be as well as or better equipped than the top hospitals in the [Washington] D.C. area.”

Asked why American corporate executives, who have experience with the single-payer health care systems in many countries where their subsidiaries operate, are not pushing for adoption of such a system in the U.S. — a move Buckley says could save them considerable money — he responded, “Americans have a contempt for the way other countries do things. It’s either that, or they just don’t know about other countries and their medical systems.”

Buckley added, “Trump in the past has said good things about Canada’s Medicare system. Ideologically I don’t think he’s opposed to it. But given the fecklessness of the Republicans in Congress, he may feel that it would be too hard to push through.”