Does Vladimir Putin really own Donald Trump? It's more likely than you think

Kompromat is the name of the Russian game — and to win the White House, Trump may have unwittingly been played 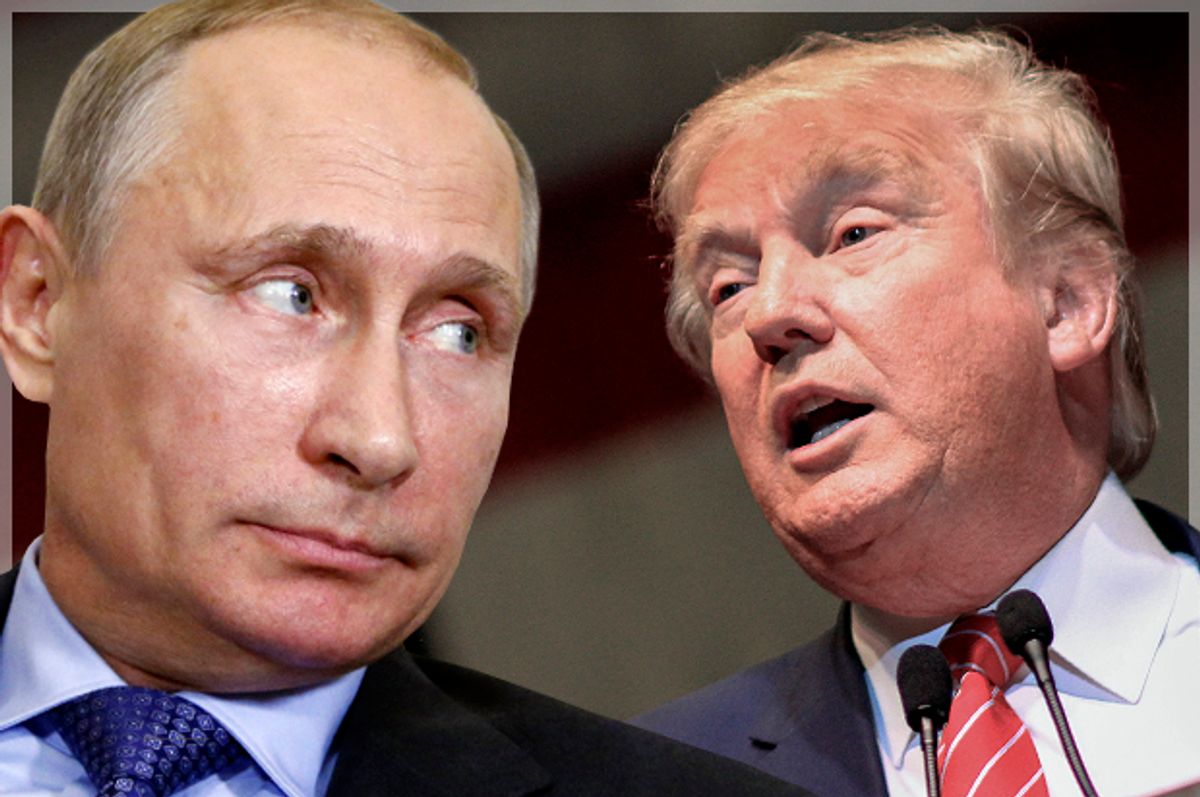 Imagine the moment when Vladimir Putin first learned that his Russian hackers had struck gold by obtaining the emails of John Podesta, the chairman of Hillary Clinton’s presidential campaign.

Shots of vodka all around, singing, dancing and hurling empty glasses into the fireplace. Then Putin rubs his palms together and begins to scheme: “How best to use this information?”

One obvious ploy would be to secretly approach Donald Trump’s campaign and demand a ransom in exchange for the public release of Podesta’s hacked emails.

Imagine the reaction from Trump: “Absolutely not! I would never compromise my honor and integrity. I would rather lose this election than win in an underhanded manner.”

Trump, of course, would have done anything to have those emails released. “Name your price,” would far more likely have been his response.

The Russians would have instructed Trump that all he needed to do was just take a more friendly position toward Russia. Do not criticize Russia or Putin, and advocate for better relations between the United States and Russia. And once Trump becomes president, he would then need to help lift the sanctions against Russia for invading Crimea.

“That’s it? That’s all I gotta do?” Trump would have exclaimed in delight. “Done!”

The art of the deal.

But, of course, there is just one little catch that Trump is too dimwitted to have appreciated. By collaborating with Russia, he becomes compromised.

Trump’s situation, the extent of the compromise is enormous. Russia could easily prove to the world that Trump collaborated with Russia during the campaign, and this would result in Trump’s immediate impeachment. This means that Putin possesses the power to instantly end Trump’s presidency whenever he pleases.This is tremendous power. Trump knows full well that if he does not follow Putin’s orders, then Trump’s rule is over.

And now that Trump is compromised, Putin need not stick to the terms of the original deal. Instead, Putin is free to make new demands. In fact, Putin could make any demands his little black heart desires. Trump has no choice but to obey. Bam! Putin owns Trump. The art of the blunder.

Of course we do not know for certain that this situation transpired. But it is highly plausible. If the compromise did in fact occur, this would certainly explain a lot. It explains the bizarre behavior of Trump steadfastly refusing to criticize Putin or Russia. No wonder – he can’t. It explains the reasons for the extensive secret contacts between Trump associates and Russia, and why they have repeatedly lied about it.It explains why the Trump camp seemed to know in advance exactly when Podesta’s hacked emails would be released.

It explains why Trump has appointed senior officials who have extensive ties to Russia, like his now-fired national security adviser, Michael Flynn; the secretary of state, Rex Tillerson; and the attorney general, Jeff Sessions. A compromised attorney general is especially notable because this would permit Russian crime to infiltrate the United States without prosecution.

It also explains the current approach of the FBI in its investigation into Trump’s Russian connections. The FBI seems to be focused on two suspects: Trump’s fired campaign manager, Paul Manafort, and Flynn. (As we learned this week, the list may also include Trump's son-in-law, Jared Kushner.) These two characters are key because if the Russians contacted the Trump campaign with an offer to collaborate, they may well have communicated through one or both of these figures due to their pre-existing Russian connections. The FBI now seems to be squeezing these two men by uncovering unrelated financial crimes they may have committed, in order to threaten them with lengthy jail sentences unless they fully disclose all they know about Trump’s arrangements with Russia.

The pieces of the puzzle seem to fall into place under the scenario that Trump has been compromised by Putin.

If Putin has in fact pulled off the caper of the century by compromising the president of the United States, then Trump, the “great dealmaker,” will go down in history for the greatest bungled deal of all time.