The directors of “Baywatch” and “Snatched” talk trends in trailer music 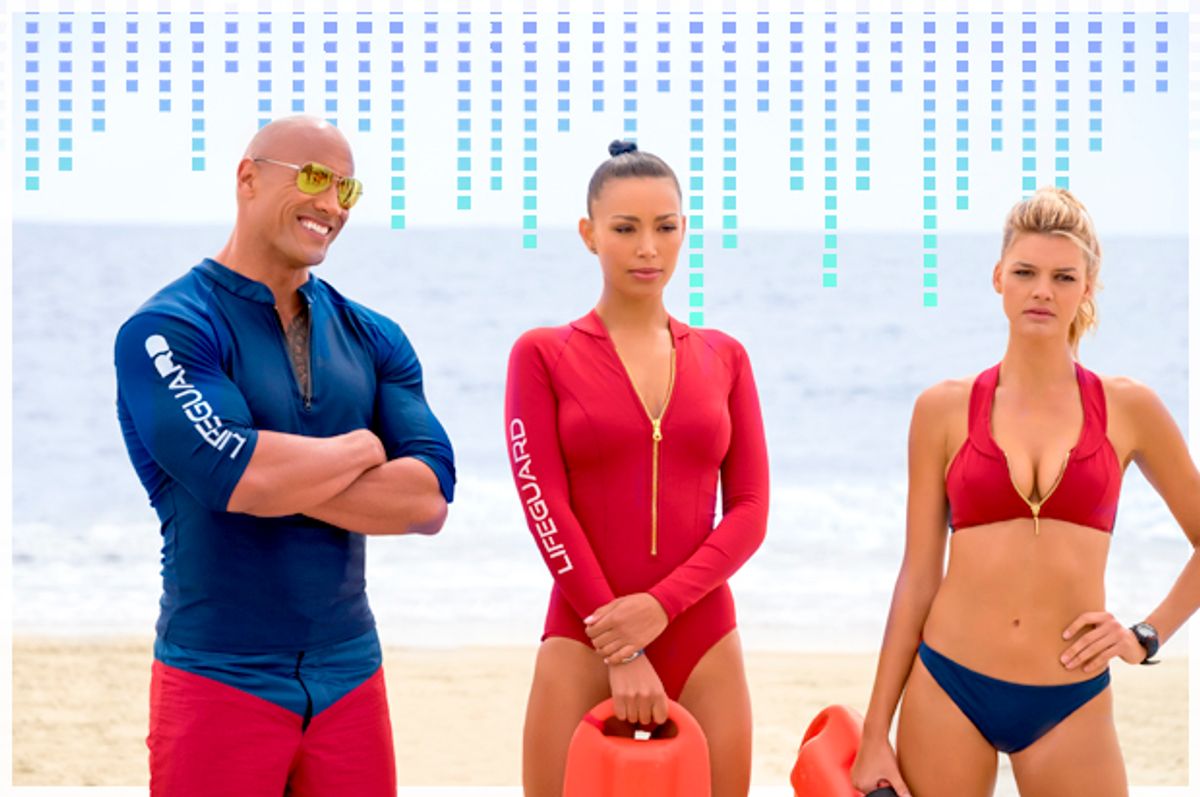 “Baywatch” opens this weekend, and before you see it — if you see it — there are some things you should know. First, the movie is not the show. The cheesy music, the schmaltzy acting, the objectification of women, David Hasselhoff, it's all gone. Second, the movie is an action-filled buddy comedy. Dwayne Johnson and Zac Efron play Mitch Buchannon and Matt Brody, a pair of adversarial lifeguards who must join forces to fight a more serious threat.

These may seem like simple enough messages to communicate. However, for a big-budget summer blockbuster like “Baywatch,” doing so while also enticing viewers is anything but simple. “Before I got into this business, if you had told me what goes into making a movie trailer I wouldn't have believed you,” said Peter Giannascoli, who heads Paramount’s marketing team.

For big-budget studio fare, a trailer may go through upward of 30 drafts and typically cost exorbitant sums of money to produce. (The song licenses alone can cost six figures if the trailer makers want to use a popular track.)

The process of creating a trailer involves collaboration between the studio’s marketing team, an outside ad agency and the filmmakers, all of whom must decide what elements of the film to highlight, which clips from the film to show and, perhaps most important, what music to use.

“You're trying to generate an emotional response very quickly and very efficiently,” Giannascoli said of making trailers. “And there's nothing better than the perfect song to generate that emotion in the time you have.”

Increasingly, for big-budget summertime comedies such as “Baywatch,” that perfect song seems to contain a few common elements: an up-tempo electronic beat, a catchy tune and a worldly flair.

Take, for instance, the trailers for this summer’s slate: The trailer for “Rough Night,” about a bachelorette party getaway gone wrong, features M.I.A.’s “Double Bubble Trouble” and Major Lazer’s “Light It Up”; the trailer for “Snatched,” about a mother-daughter trip to Ecuador gone wrong, features Photronique’s "Put Your Hands Up (Bad Girl)" and Bomba Estéreo’s “Soy Yo”; and the “Baywatch” trailers feature the Pusha T remix of the Yogi & Skrillex song “Burial” and Steve Aoki’s “Delirious (Boneless).”

The obvious explanation for why similar sounds are popping up in trailers for the summer’s biggest comedies is that these sounds are, simply, popular. “For a while there was a lot of dubstep music happening in trailers when that genre was first peaking — thinking back to 2011 and 2012,” Giannascoli said. “Trailers definitely do tend to mirror whatever's happening in the broader culture and pop music in general.”

However, a taxonomy of music in movie trailers would yield different results for, say, indie comedies and dramas or action franchises.

In trailers for indies, you tend to hear, well, indie rock, by bands such as Vampire Weekend or Dark Rooms. In trailers for superhero films or action franchises like “Star Wars” or “Wonder Woman” you tend to hear orchestral arrangements. In each case, the given song is meant to communicate a specific tone and appeal to a specific audience. Trailer makers are not using a song because it’s popular so much as they’re using a song because it best conveys the vibe of the movie they’re advertising.

Jonathan Levine, who directed “Snatched,” told me that when they were creating the film’s trailer they were searching for “a song that has a female vocal, that’s empowering and that conveys a sense of fun.” They also wanted something that had the right rhythm. “Within that category, there’s lots of different songs. And [the marketing team] might send me 10 different songs. Choosing becomes about finding a combination of what seems to match [the tone of the film], what seems to take you on a ride editorially, what works with the cut, and then a lot of times what’s cost-effective, too.”

The process suggests that the sounds that pop up in trailers say more about what types of films are being made than the trailers being made say about what type of music is popular. The staples of today’s big-budget summer blockbuster comedies are heavy partying, a tropical locale and an adventure gone wrong: hence, lots of worldly electro house music.

But there’s another dimension that explains these songs’ prevalence, too. Trailer makers want to hold your attention and, in the best-case scenario, have the song get stuck in your head. Seth Gordon, who directed “Baywatch,” said the gold standard for a trailer is that, “you have such an amazing song choice that you then associate the song with the movie and they kind of synergistically bounce off each other and drive people to the movie.” (Think M.I.A.’s “Paper Planes” in the “Pineapple Express” trailer or Arcade Fire’s “Wake Up” in the “Where the Wild Things Are” trailer.)

“Baywatch” may not have found that magic song, but Gordon was pleased that, “we found three or four themes that keep running through the marketing that accomplished a similar goal.” In other words, the music hit all the right beats.