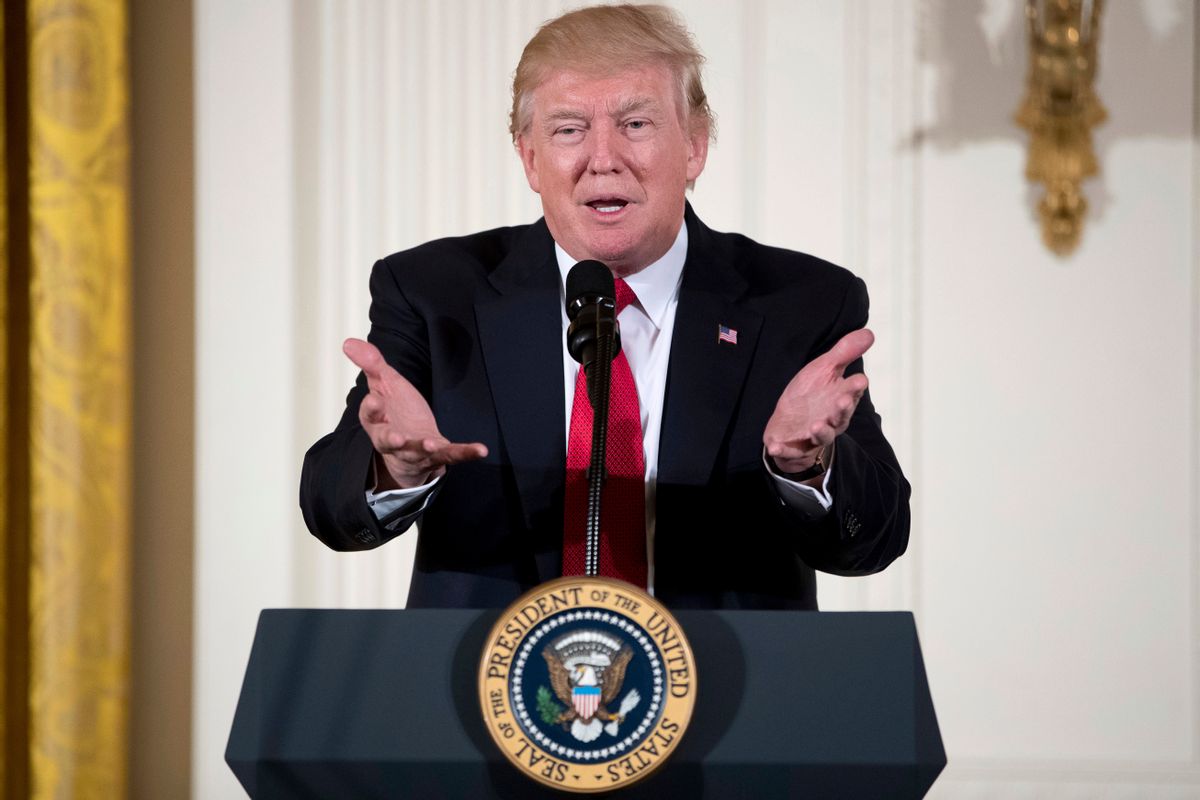 The Trump Administration has officially unveiled its proposed budget to "Make America Great Again," and by all accounts it’s a total flop. Most news outlets are ignoring are the greater implications of what is proposed in the budget itself — the society America would become if the Trump budget became official.

The specific elements of the proposal highlight severe cuts to programs that support the middle class and the poor, like the Children's Health Insurance Program (CHIP) and the Supplemental Nutrition Assistance Program (SNAP, or food stamps), a move that is worthy of disdain on its own. However, the general sentiments of the proposal suggest a perspective and intention that is far more disturbing and could transform America's constitutional Republic into a de facto military junta. Is this Trump’s true vision for American greatness?

The Hill reports that the Trump budget, “A New Foundation for American Greatness,” would dramatically cut anti-poverty and safety net programs, leave Medicare and the retirement portion of Social Security untouched, and pile on billions of additional tax dollars on defense spending. Although this might be rationalized as an attempt to protect seniors and American security, it’s actually a strategic move to perpetuate class war and divide the poor, according to Axios:

President Trump's 2018 budget proposal on Tuesday won't cut Social Security payments to retirees or Medicare, but it will make serious cuts to other entitlement programs. A source with direct knowledge tells me the Trump budget will save $1.7 trillion on the mandatory side over the next ten years.

It would seem that by cutting programs that are depended on by the poor and saving programs depended on by the elderly (a demographic that went for him over Hillary Clinton by a 53-45 margin, according to Pew Research), the Trump administration is attempting to position itself to garner support from seniors while continuing its war on the poor and minorities. The success of this strategy is dependent on seniors ignoring elements of the budget that don’t directly involve the protection of their Social Security retirement benefits.

The Trump budget also wages war on citizens with disabilities by stripping them of their Social Security and Disability Insurance. The rationale given for this move, according to Office of Management and Budget (OMB) Director Mick Mulvaney, is that the federal government should not measure compassion by the number of programs offered to those in need.

“If you’re on food stamps and you’re able-bodied, we need you to go back to work," OMB Director Mulvaney said in defense of the cuts.

The most obvious problem with this rationale is that there are many citizens suffering from mental and emotional disabilities that can be just as debilitating as physical conditions. In addition, the term “able-bodied” has not been defined in a meaningful enough way to rule out those with significant impairments being given the same cold declaration.

More glaringly, this assumption speaks to a fundamental lack of understanding about the state of poverty in America. OMB Director Mulvaney's assumption is that people using food stamps (SNAP) wouldn't do so if they had a job. However, this line of thinking erases the millions of food stamp recipients who simply need help paying for groceries due to underemployment and low wages. According to a 2016 study from the Center on Budget and Policy Priorities, 82 percent of non-disabled adults that depend on food stamps have had employment in the past year.

In addition to being a proposal marked by austerity and elitism, the Trump budget is based on alternative facts about growth projections, rather than reality. CNBC Financial analyst Jim Cramer laughed off the growth projections, and Larry Summers, who was the former Secretary of the Treasury in the Clinton administration, wrote that Trump's growth projections were only believable to those who also believed in "tooth fairies and ludicrous supply-side economics."

Perhaps even more laughable than the growth projections is the obvious $2 trillion mathematical error that the OMB failed to spot. Jonathan Chait from New York magazine reminds readers that previous Republican presidents couldn't make tax cuts for the rich pay for themselves, yet Trump is continuing down this same failed path:

It seems difficult to imagine how this administration could figure out how to design and pass a tax cut that could pay for itself when Ronald Reagan and George W. Bush failed to come anywhere close to doing so. If there is a group of economic minds with the special genius to accomplish this historically unprecedented feat, it is probably not the fiscal minds who just made a $2 trillion basic arithmetic error.

The collective skepticism and outrage over the Trump budget is warranted. The administration’s proposed cuts include 31.4 percent from the Environmental Protection Agency, 29.1 percent from the State Department, 20.5 percent from the Department of Agriculture and higher payments for already cash-strapped student loan borrowers. However, this isn’t the worst part of the proposal. Arguably, it is the overall implication of the proposal itself that should have all Americans on alert.

According to The Hill, the Trump administration’s proposal seeks to add half a trillion dollars to the defense budget over the next ten years while cutting $1.5 trillion in non-defense programs and instituting $1.4 trillion in Medicaid cuts in the same time period. This combination of spending and cuts speaks to support for an escalation of domestic poverty and a simultaneous increase in investments in militarism. When those two are combined, it will undoubtedly blaze a path for a banana republic-style military dictatorship.

The hallmarks of dictator-led regimes include a disdain for and elimination of the free press, declarations of absolute power, and increased spending for militarism and policing that dwarfs a reasonable need. Trump’s glorification of the police state does nothing to temper fears of such a damning picture of what Trump’s version of a ‘Great America’ might mean for the rest of us.