Why did the Nazis steal so many books?

During World War II Nazis looted 200 million books by some estimates; unlike art theft, it wasn't mainly for profit 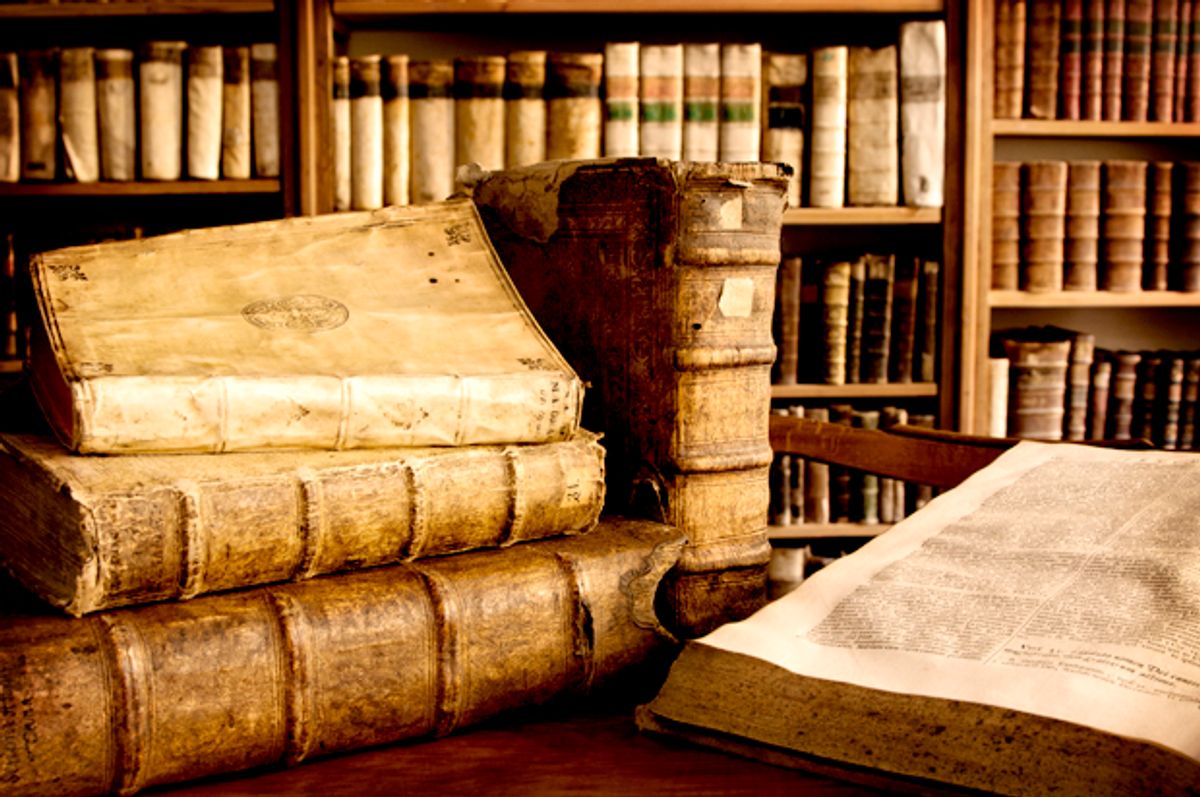 Until the late 1930s, German children taught about rhinoceroses would have flipped their textbooks not to a photograph, but to a 1515 woodcut print by an artist who had never actually seen such a creature in the flesh. The artist, Albrecht Dürer, was the greatest in Germanic history, and the print is spectacular. It happens to be a pretty good impression of a rhino, but not one that was made by an eyewitness. A real rhino had been in display in Lisbon in 1515, brought there in 1513 from India. Dürer was sent a description and a sketch of that rhino by another artist, and from this he prepared his woodcut.

But while it is a wonderful artwork, it is not accurate and certainly not scientific. Dürer presented the animal covered in bony plates, as if it were wearing a natural suit of armor, complete with a throat protector (gorget) and what looks like rivets linking together various “plates.” It is rhino as medieval knight. He also showed the rhino as scaled, like a lizard (though some scholars argue that this is a representation of the dermatitis from which the captive rhino suffered after its four-month sea voyage from India to Portugal). Enthusiasm for Dürer overrode the desire for scientific accuracy. Even when photographs of rhinos were available, even when one could see a real rhino at the zoo and recognize the inaccuracy of Dürer’s version, the print remained the exemplar of rhinoceros-ness in reference books for schoolchildren.

Which brings me to Nazi book theft.

The scale of book theft during the World War II is immense, far dwarfing the already boggling numbers of Nazi art theft. While some have estimated the 5 million art objects changed hands inappropriately during the World War II, most of them stolen or appropriated by the Nazis, few have discussed the Nazi practice of looting books, rare and otherwise, from the libraries of conquered Europe. "The Book Thieves," a new book by Swedish journalist Anders Rydell, focuses on just this. Beyond the book burnings, book theft was engaged in on an unimaginable scale. In an interview with the European Review, Rydell explained that it “dwarfed the art looting,” with an estimated 100 million to 200 million books stolen during the war.

While it feels more logical to steal art (some exhibited as “degenerate,” other pieces sold to foreign collectors — including American and British ones — to finance the Nazi war effort, still others kept by avaricious Nazi high-ups for their personal delectation, and additional works intended for Hitler’s planned “super museum” at Linz) since it has an obvious value financially in terms of its sale, symbolically in terms of capturing the treasures of the vanquished and aesthetically, books are a rather different proposition. Sure, rare books and manuscripts can have a sale value rivaling artworks, but most of the books stolen by the Nazis were not financially valuable. The Nazi art theft bureau, the Einsatzstab Reichsleiter Rosenberg was originally founded to seize documents and archives that had a strategic value to the Third Reich, and only later began to consume artworks, too. And therein lies a clue.

Rydell’s analysis of why the Nazis took so many books reveals some chilling rationales. “The looting had mainly two purposes,” he said. “On the one hand, to ‘unarm’ their enemies by taking the weapons of thought — books, libraries, archives. In Poland, the Nazis even looted books from schools — in a Nazi-dominated East, Polish children didn’t have any need for higher education as, in the future, they would be reduced to slaves under the master race.” Kafka once said, “A book must be an axe for the frozen sea within us.” The Nazis aimed to disarm those they wished to see subdued by removing the weapons of thought.

Rydell continued, noting that “the second goal was even more devious." He explained, "By looting the libraries and archives of their enemies, the Nazis tried to take control over the memory and history of the victims. Alfred Rosenberg, who founded the Institute for the Study of the Jewish Question (and not coincidentally the ERR, which even bears his name), was afraid that, even if the Nazis won the war, future generations would judge them for their crimes. Therefore, it was important to control the memory of Jews, not as a way to eradicate them from written memory, but to establish the Jews as an incarnation of evil for all future generations.” Thus it was not for profit but for posterity and the ability to control it that the Nazis sought to wipe Europe’s libraries clean and to rewrite a version of history that best suited their spin.

This is where the example of Dürer’s rhinoceros becomes relevant. The German pre-Nazi government decided that it would rather have this print as exemplar of a species than an accurate picture of the real thing. It is a very Nazi sort of decision, choosing a leading Germanic artist for ideological reasons to include in books about facts, when the facts are not sufficiently self-promoting.

If you can eliminate bodies of knowledge, the compendia housed in libraries of the predigital era, where access to physical tomes was required to look up facts, then you can rewrite fact as you see fit. That was what Nazi book theft was about. The ability to manipulate history, and therefore program the thoughts of future generations, is far more valuable than the auction price of a painting. But it requires a colossal-scale operation, sweeping libraries clean because “real” history books lurking here and there would be like time bombs. Future scholars might find them and question your tailored version of reality. Thus it is not outrageous to see the Nazi attempt at wiping history clean by stripping Europe of its books as analogous to attempts to physically wipe Europe clean of what the Nazis considered “lesser” races. They are part and parcel and, as Rydell argued, they are also chicken and egg.

Today information remains in books, and that information tends to be deemed most reliable. Presumably one or more editors and fact checkers have examined the material, and particularly in scholarly works with citations, the content of these tomes is likely to be accurate to the best knowledge of contemporary researchers. But still searching for answers in libraries and books is limited to but one subsection of the world’s population: students and professors and scientists and the odd intellectually rigorous laypeople. Most folks go online for “facts” and read sites like Wikipedia, which anyone can alter (for better or worse). A contemporary version of the Nazi book theft would be if, say, some presidential candidate — in league with some superpower in opposition to the country where that candidate was running for office — were to somehow take over the entire internet and erase fact-based pages, in order to replace them later on with histories of their choosing. After a generation or so, the world might forget how history had been presented before and learn only this newly imposed version of events. Logistically, a cyber-conspiracy of that sort would be easier to pull off than seizing every single book across an entire continent.

Among many proper photographs, you can still find Dürer’s print on the Wikipedia page for rhinoceros. If one day the photographs vanish, and we’re left only with a single, ideologically chosen exemplar (no matter how beautiful), then it’s time to start worrying.