The 10 hottest, sweatiest, most humid summer movies ever made

The temperature is climbing outside, but it's already broiling in these flicks 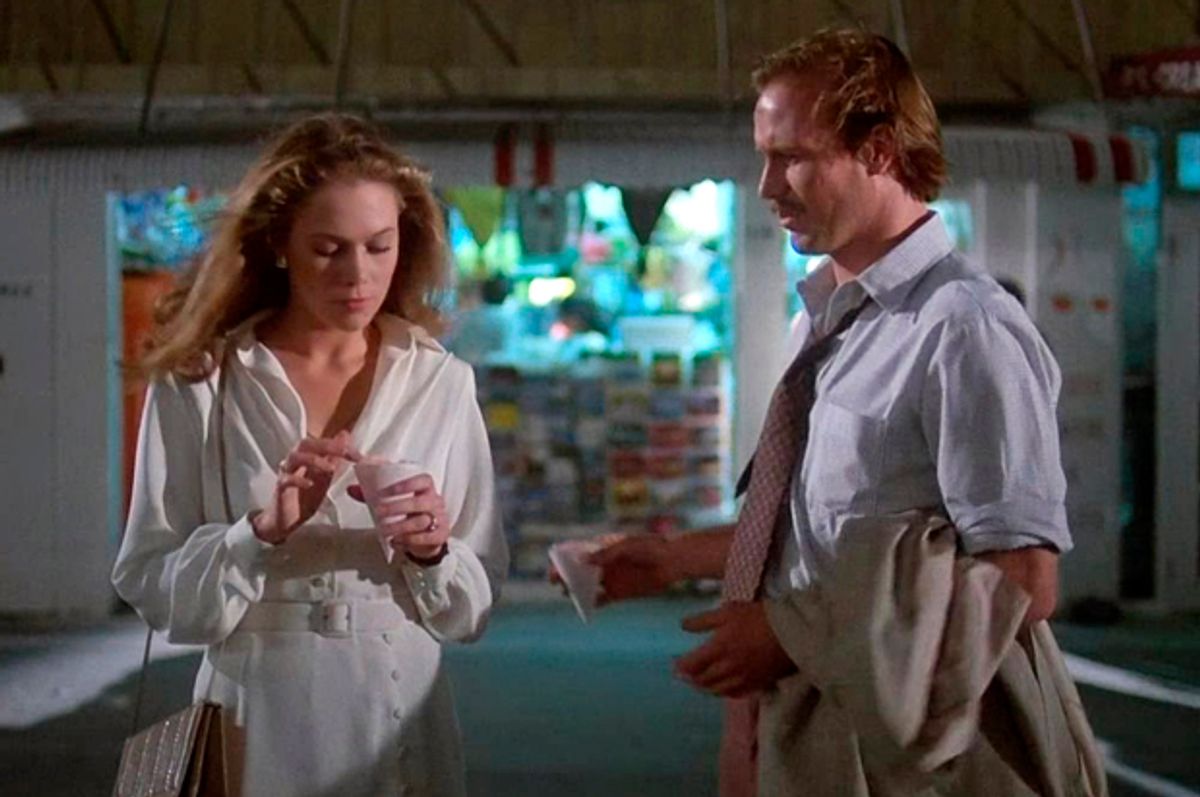 Some like it hot. With summer unofficially starting this weekend, it’s time to sweat. While it might be nice to cool off in an air-conditioned home or theatre, the characters in these films all feel the heat — literally. Here are 10 scorching-hot flicks that pass the sweat test.

“Body Heat”
Is there anything sultrier that Kathleen Turner’s femme fatale in writer-director Lawrence Kasdan’s steamy “Body Heat?” In her auspicious film debut, Turner plays Matty Walker, a woman who wants her rich husband (Richard Crenna) dead, and asks her lover, the not-so-bright Ned Racine (William Hurt) to help her kill him. Set in Miami, during an infernal heat wave, Matty spills cherry-water ice on her white blouse one night. Ned offers to wipe it off. “You don’t want to lick it?” Matty purrs seductively, as viewers melt. That’s just the foreplay. The sex scenes are even hotter.

“Dog Day Afternoon”
The title comes not so much from the dog days of summer — though it is an unrelentingly hot afternoon — but from the fact that Sonny (Al Pacino) and Sal (John Cazale) are having a very bad day. Based on a true story (check out the remarkable doc “The Dog”), this classic film recounts a bank heist gone wrong in Brooklyn. As simmering tempers reach the boiling point, the characters, Sonny especially, endlessly perspire.

“Do the Right Thing”
Spike Lee’s potent masterpiece chronicles how tempers flare and eventually explode during the hottest day of the year. A white-owned pizza parlor in a largely African-American neighborhood becomes the epicenter of a racial incident that leads to shocking violence and puts a community in crisis. The temerity, not the humidity, explains why folks are so quick to anger. Lee also made the atmospheric “Summer of Sam.”

“Apocalypse Now”
Welcome to the jungle. As Captain Willard (Martin Sheen) heads upriver to find Green Beret Colonel Walter Kurtz (Marlon Brando) in Francis Ford Coppola’s legendary adaptation of Joseph Conrad’s “Heart of Darkness,” this film gets under viewers’ skin like a mosquito bite. The journey consists of a series of adventures in the broiling temperatures, culminating in a stifling encounter that could be the cinematic equivalent of prickly heat. Watching Sheen drenched in sweat as Kurtz utters “the horror” is sticky business.

“The Seven Year Itch”
Marilyn Monroe is the best reason to see this dated Billy Wilder comedy about Richard (Tom Ewell), contemplating an affair with his hot upstairs neighbor (Monroe) one summer while his family is away. Sure there’s the classic scene of “a delicious breeze from the subway” blowing up Monroe’s skirt. “Sort of cools the ankles,” Richard observes. But the best line has Monroe’s character admitting in her little-girl breathiness, “When it gets hot like this, you know what I do? I keep my undies in the icebox!”

“Wake in Fright”
John Grant (Gary Bond), a tall drink of water, ends up in the isolated Australian outback town of “The Yabba” during a particularly hot Christmas. It turns out the town is truly hell. The best (and perhaps only) way to cool off is to go to the pub, but it’s filled with loud, drunken, very sweaty, very unpleasant men. John is forced to drink, and drink and drink. It doesn't provide relief. He has a failed tryst with Janette (Sylvia Kay), and goes on a violent kangaroo hunt. The hyper-masculinity is particularly toxic, and John’s discomfort is as palpable as the heat.

“Suddenly, Last Summer”
Maybe Tennessee Williams’ “Cat on a Hot Tin Roof” is sweatier, but this hot and bothered film is arguably more fun. Catherine Holly (Elizabeth Taylor) witnesses the horrible death of her cousin Sebastian on a scorcher of a July afternoon in Spain when the boys he is trying to seduce exact a horrible revenge. Catherine’s wealthy aunt (Katherine Hepburn) creates a hothouse atmosphere — starting with her entrance, descending in an elevator, and showing Dr. Cukrowicz (Montgomery Clift) her overgrown garden.

“The Long, Hot Summer”
Yes, “Cool Hand Luke” is the sweatiest Paul Newman film. And yes, the title of Martin Ritt’s adaptation of William Faulkner’s stories goes toe to toe with “In the Heat of the Night” (another sweaty film). But don’t dismiss this sweltering Southern-fried gothic melodrama. Con man Ben Quick (Paul Newman) arrives at a plantation in Frenchman’s Bend, Mississippi. The owner, Will Varner (Orson Welles), realizes Ben would be a good husband for his virginal daughter Clara (Joanne Woodward), though she's prim and uninterested at first. “The Long, Hot Summer” chronicles Ben and Clara’s intense, impassioned romance, which features several sizzling clinches over the course of the long, hot summer. It also bled over into real life as Newman and Woodward got married off-screen during the production.

“Burnt Money”
The climax of this stylish crime melodrama from Argentina has criminals and lovers Nene (Leonardo Sbaraglia) and Ángel (Eduardo Noriega) holing up in an apartment, where they set their clothes on fire. Stripped down to their underwear and sweating it out as a thrilling shootout takes place, the guys cuddle and burn their stolen loot (hey, the title gives it away). Violent and sexy as hell, “Burnt Money” smolders. One may need a shower to cool off after this muy caliente film.

“Flashdance”
Alex Owens (Jennifer Beals) sweats under sparks and steam as she works as a welder by day. At night, she gets sweatier being an exotic dancer at Mawby’s bar. Alex’s energetic dance to “He’s a Dream” has her dousing herself with water in front of an adoring crowd. But she really works up a sweat trying to achieve her dream of being a ballet dancer, especially when she has to audition for the judges of the dance school she wants to attend. The film even inspired the fashion trend of an off-shoulder sweatshirt.