Best of Salon: Army of one, soldiers undone: The hope that died in basic training

From 2015: You were a brilliant and courageous woman. How I admired you then. How little either of us understood 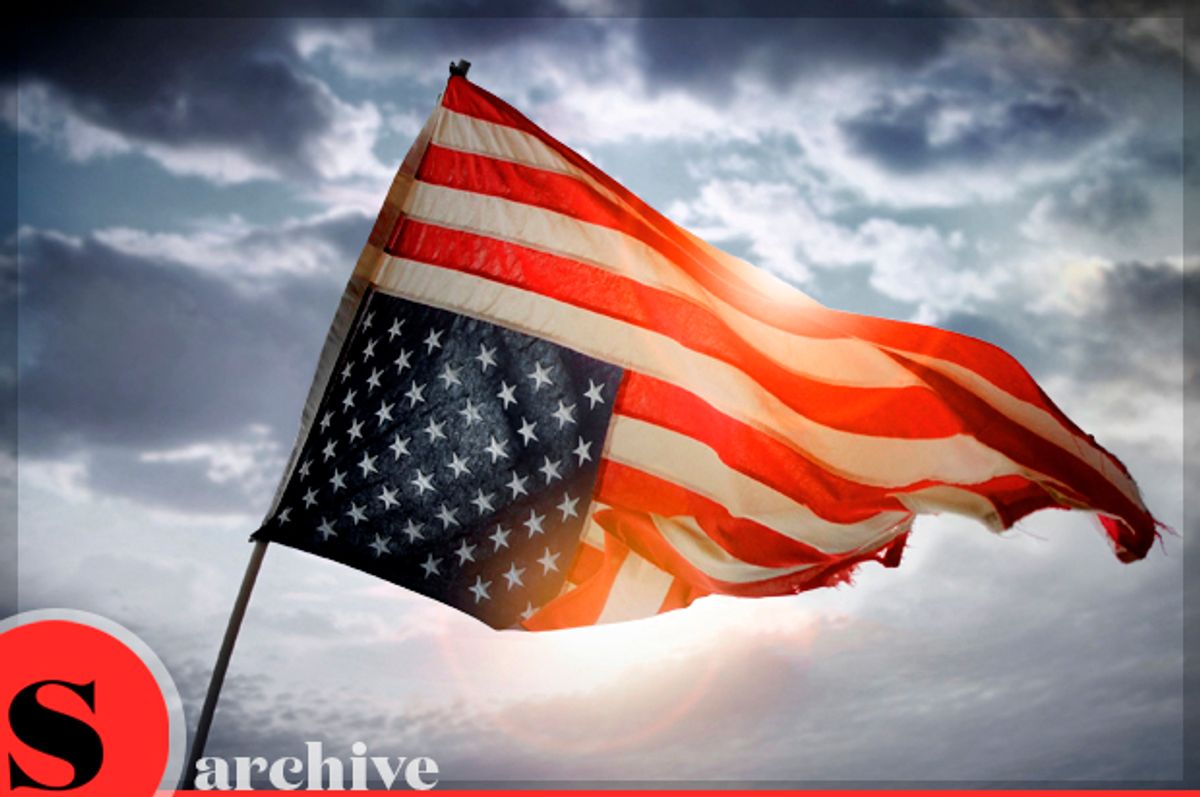 This story was originally published in Salon on May 25, 2015.

A few months before the September 11 attacks, the Army launched a 150 million dollar marketing campaign to counteract the widespread belief that military service is dehumanizing and an affront to individuality. The old slogan, “Be All That You Can Be,” was replaced with the newer “Army of One.” An expensive shift of emphasis that moved recruitment efforts away from the idea that you become who you are meant to be by virtue of your participation in an institution greater than yourself, and towards the idea that the military becomes what it is meant to be by virtue of the excellence of it’s individual members.

Of course, Memorial Day being what it is, this essay is a portrait of loss -- a very particular kind of death -- of moral ambition, of innocence, of a friendship between soldiers. You were a brilliant and courageous woman, the kind of person who believed in the power of individuals to uphold principles of goodness and dignity in the face of brutality. How I admired you then. How little either of us understood.

Week One: It was February of 2002, five months after the September 11 attacks, a year before before Operation Iraqi Liberation. We both arrived in the middle of a damp night. Orange floodlights illuminated puddles on the asphalt as buses of new recruits rumbled past Ft. Leonard Wood’s gates. That night, we slept on strange, hard bunks in a large, all-female room. None of us knew what the coming days would bring, but we were open to the possibility of pain.

I met you while standing in line for breakfast. A girl whispered that we shouldn’t drink the juice because the Army puts all kinds of drugs in it. You rolled your eyes and smiled at me. Later that day: uniforms, briefings, shots in the ass, our first fitness test. There were plenty of girls who couldn’t do two or three push-ups, but you weren’t one of those. You kept your head down and did what was asked, like a man might. No whining or crying.

I made sure I stood next to you when our drill sergeants assigned battle buddies. You hated the term, which reminded you of holding hands to cross the street in kindergarten, but soon we began to live out the meaning underneath the jargon. Look out for one another. Keep each other safe. It’s hard to think of now.

Week Two: You sat on the floor in front of your wall locker and winced as you peeled off your socks. Everything smelled of Simple Green, sweat and, suddenly, rot. Your feet were covered in red, infected blisters. We all wore the same shitty boots and expected blisters, but not like this -- blood around and under your toenails, skin rubbed to raw hamburger. When you saw me looking, you hissed at me not to say anything. You knew that if you complained about blisters now, here, in the relative safety and comfort of the states, you had no shot at being formed into the kind of person who would die well.

Week Three: We stood in formation in a large, concrete-floored gymnasium. Ten or twelve drill sergeants took turns sharing their ungenerous observations of our physical appearances, as we held duffle bags full of equipment at arm’s length until our shoulders shook, and then past the point of shaking, past the point of burning or any kind of feeling -- except ragged breath and blurred vision.

Week Four: Sleep was the main thing. How jealously we guarded those thin, nighttime hours. Most days I would have rather slept than eaten. I often fantasized about slipping away from our boxy formations and curling up on a bit of icy concrete. But I would look down the tired squad and see your set jaw and inward, closed-off eyes under a fringe of uneven bangs, and I would keep my place -- hands clasped behind my back.

One evening, after a brusque chow-hall dinner, we marched over to a musty, pine-walled building for a lecture on Army Values – LDRSHIP: Loyalty, Duty, Respect, Selfless Service, Honor, Integrity, Personal Courage. The warm room was lit with a buzzing fluorescence. Drill Sergeants walked stiff circles around the room, wolves looking for the glazed eye, nodding chin and drool of sleep. We were ordered to drink water to stay awake. Several hundred gallons must have passed through our bodies each day for this purpose.

The speaker at the front was a small, dry pixel. You, next to me, pinched my arm and handed me a canteen, as my lids slipped into the Southern Hemisphere. Behind us, we heard a scuffle, a Drill Sergeant yelling obscenities. Someone must have dozed off. We turned to look and received our own blast of vulgarity. A pimply kid from third platoon was being dragged to the back of the room. Overpowering the finer points of Integrity, came the sounds of DOWN, UP! Down, Up! We heard the kid gasping. Then, behind our heads, an animal scream, something about the kid’s heart. We didn’t look. I remember the strain of your hand gripping mine. There was a sound of metal sliding across linoleum and then nothing.

“...Which means doing what’s right, legally and morally. Integrity is a quality you develop by adhering to moral principles.”

Week Five: The shortest girl in our platoon, Pvt. B., cried out -- mile six of an eight-mile ruck march into the forest. Her hip hurt. The pelting rain made the trail slippery, and our BDUs stuck to our skins. A drill sergeant told her to lengthen her stride. Do you remember how those rucksacks pulled at our shoulders, the M-16s heavy in our arms? You offered to carry her pack; she nodded wearily and handed it to you. The girl finished the march, but was limping and soon collapsed. Drill Sergeant P. told her to quit making shit up, but sent her in a truck back to a nurse.

Week Six: We used tiny shovels to dig foxholes in the packed Missouri clay, the perimeter of our fake Forward Operating Base. Later that night, you and I took turns lying in the shallow hole we’d dug, scanning the black wet-on-wet of the forest, while the other rested 50 feet away under a tarp that kept most of the rain off our sleeping bags. At 3 a.m. I was on watch. Drill Sergeants roamed the dark woods waiting for someone on guard duty to nod off, so they could terrorize us with CS gas grenades. In a sleepwalker’s haze, you somehow made your way over to the foxhole and tried to beat me with the butt of your shovel. But you fell and woke. I remember your face, wrinkled with bewilderment, a child’s face.

Week Seven: Everywhere we went, we sang cadence. Sometimes we just counted our steps to four over and over again. Sometimes left, right, left. But sometimes we sang these low, mournful songs – bluesy tunes in minor keys.

In years to come, the cadances would change, and I wonder if you called out along with everyone else, “I kick in the door, and what do I see  three fucking hajis staring at me. Grab the first one by the neck,  slice his throat, throw him to the deck.”

Week Eight: One morning, we managed to get outside a few minutes before morning PT (physical training) formation. You stood in thin, pre-dawn light, waiting for the sun to creep, finally, over the frosted trees. You said it would warm me. I believed you, even though the light was as cold as anything else. You chewed on coffee grounds left over from your MRE and whispered about how the Army needed people like us, dissenters, soldiers who thought the moral universe should be brought to bear on the coming war.

When Drill Sergeant P. barked us into platoon formation, we scuttled into rank and file. Inspection and the inevitable failure followed. We did push-ups. One of us puked off to the side in the grass. Dirtied, arms shaking, we learned that we would do the obstacle course that day. Also, Pvt. B. had two broken hips. We would not see her again.

Week Nine: One Sunday they let us take a break from scrubbing toilets to go to church. I went with you to a Lutheran service – there being no Eastern Orthodox chaplains at Fort Leonard Wood. We were invited to drink coffee with the pastor afterwards. Your strong hands looked graceful and strange holding pastel cookies in the morning light. Such extravagant food. I ate five in a hurry, as you spoke with a chaplain about God and soldiers. What it might mean for us to carry guns. Did he have thin hair, or am I meanly imagining that now? He said it was okay to kill if the country needed us to, a sacrifice for freedom. Simple enough. But you pressed; concerned about something like whether or not God recognizes the moral legitimacy of a country. The chaplain looked uncomfortable. He was fat, a moral crime by Army standards. I put another cookie in my mouth.

You did not know what was coming -- what interrogation school, barracks debauchery, divorce, Afghanistan would mean to you soon. How silly our early hopes seem now. That any one or two might dissent and not be eaten. That any one might be an Army. My dear friend, I was swallowed whole and did my job and bent over when asked. It would be a kindness not to remember.

But I do. I found you on Facebook years later. You had breast implants, no doubt a gift from the Army. There were lots of pictures of you in bars, surrounded by other soldiers, mostly men, mostly groping you. Did you bring the moral universe to bear on all those brave boys?

It is a common misconception that physical death is the only kind of death worth mourning. Late at night, deep into a second bottle of wine, I see you on the bayonet course. A drill sergeant is screaming in your face, “What makes the green grass red? Blood! Blood!” as you stab a rubber dummy. “Say it!” He yells. And you wouldn’t. You did push-ups for hours but wouldn’t glory in the thought of killing, even a rubber doll.  But that was early on. It was easy to protest violence then. War changes so much.

No one I know left the Army intact. Even those of us who kept our limbs and lives buckled -- the weight of commonplace horrors having grown too heavy. You had posted a single photo of yourself in ACUs and body armor. You are squinting in the bright heat, an uneven fringe of bangs sticks out of your Kevlar. Behind you, the desert spreads, a great empty horizon. I imagine you suddenly turning from the camera, your eyes steady and inward as you begin to run, and as you run the armor comes off, the M-16 falls in the sand and is quickly covered by wind and salt. You keep running until you are a small, pale dot at the peak of a far dune. And from my bedroom in San Antonio, Texas, I am yelling into the empty bottom of my wine bottle, and you are yelling into a waterless sky. But we cannot hear one another. And then you are gone.