Will Oliver Stone's Putin interview play into the strongman's hands? 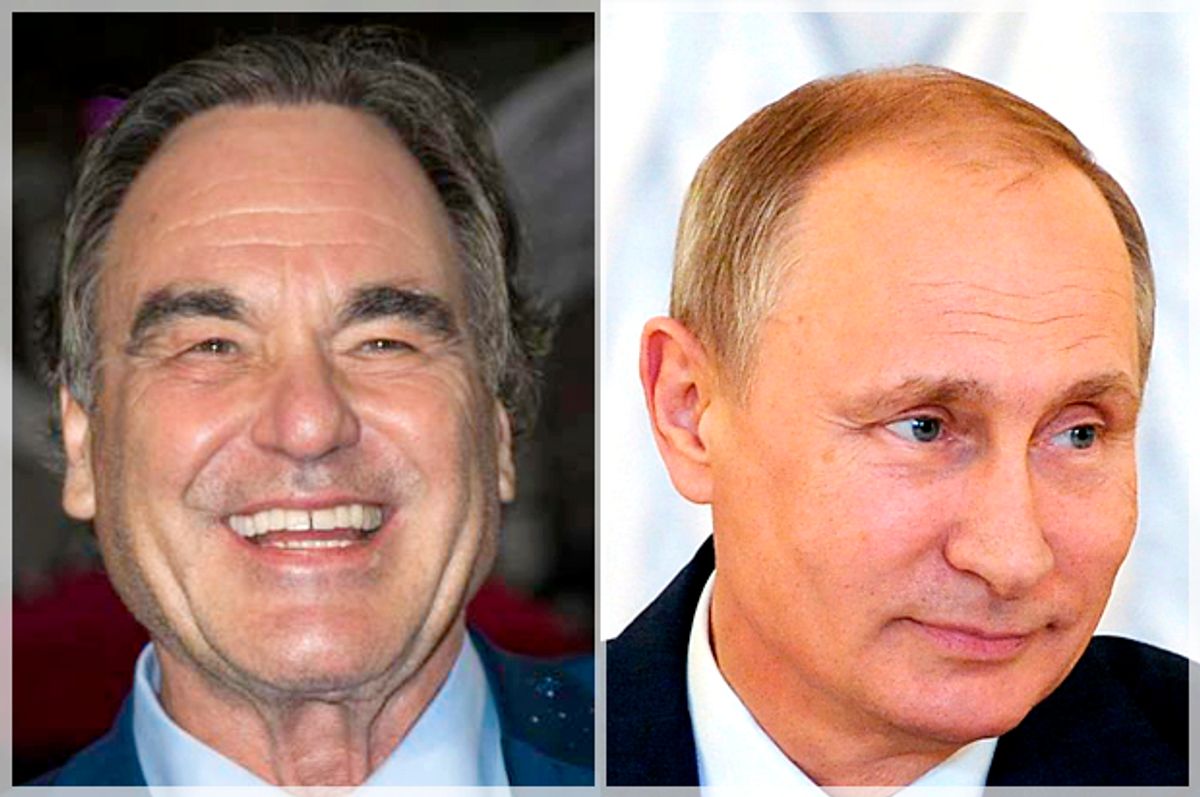 One of the more curious headlines coming out of Cannes this year is the tidbit that provocateur director Oliver Stone has sold a drama series set at America's Guantanamo Bay detainment complex to Weinstein TV. Stone's views on the U.S. prison installation there — and the Obama administration's failure to close it despite promises — are well known. How exactly they will play out over umpteen hours of scripted television should be, if nothing else, interesting.

That news will soon take a back seat to Stone's more imminent and possibly problematic project: his series of interviews with Russian president Vladimir Putin, which will hit Showtime on June 12.

The sit-down with the Russian leader follows in the path of two previous documentaries Stone created, both of them centered on controversial, autocratic heads of state: the late Hugo Chavez of Venezuela and Cuba's Fidel Castro. At the time of each profile — both of which featured Stone in an on-screen role — critics suggested that the director's arguably sympathetic back-and-forth with the presidents simultaneously enabled their political agendas and glossed over their many faults (free speech and human rights abuses being foremost among them).

It's hard at this stage to know if the case has changed with the director's shift to Putin. Certainly Stone is already casting the media's treatment of the leader as "demeaning." Despite the fact that Showtime is promoting the four-night series of talks much as they would a heavyweight boxing match and some of the questions seen in the preview are tough, Stone's comments to the press give sufficient reason for concern.

"I met Mr. P. over there," said Stone in an interview published at industry bible Deadline. "One of the earliest conversations we had was about Edward Snowden — because obviously, I’m fascinated by what happened, from his point of view. And sure enough, he was very forthright and honest, the way he speaks. As we talked, he told me the Snowden story from his point of view, which is in the film."

Snowden, the former National Security Agency contractor who fled into exile in Russia after revealing classified information detailing the scope of the U.S. government's clandestine monitoring of private communications, both foreign and domestic, is a recurring point of interest for Stone. On top of becoming somewhat of an advocate for him and speaking out often on the subject of domestic spying, the director released the biopic "Snowden" in 2016. It was his most well-received directorial outing since "JFK," which arrived in theaters more than 25 years ago.

And Stone isn't wrong to pursue this and other cybersecurity issues with the Russian president. Considering that he's given sanctuary to Snowden, Putin's take on the story — whether it's an honest one or not — is worthy of exploring (and would make for good television). Pointedly confronting Putin about the extent of Russian interference in the 2016 election promises to be equally compelling and valid.

But it seems as if Stone is bringing far more than a shared interest in shady doings at the NSA and questions regarding the hacking of the Democratic National Committee to his championship bout with Putin.

Further down in the director's discussion with reporter Mike Fleming Jr., Stone says:

One thing you have to remember is that [Putin's] popular in many countries, and not just Russia. He’s very popular in Germany, France, among many people — and he’s one of the most admired men — and for that matter, in a lot of Africa, a lot of Turkey, Syria, the Middle East. So you’re talking about a world figure here who we are constantly demeaning, treating him like he’s a con man and a murderer. As a character out of "The Godfather," because maybe we like "The Godfather."

We like that concept of villains, but it’s a very dangerous caricature when you’re dealing with world peace and the nuclear power that we have.

It is true that Putin's confirmed popularity extends well beyond Russia's borders. Saying that such popularity lends the president some measure of validity or makes him worthy of some measure of respect, however, just doesn't scan. Popularity is no barometer of worth.

Moreover, Stone warns that we should be wary of treating Putin as a "murderer" or "con man." This is confusing since, according to most accounts, he is both. There is little question remaining that the Russian president is responsible for the assassinations of various political rivals, journalists and foreign officials. As well, the general consensus is that through his decades of power, Putin has transformed Russia from a struggling democracy to a highly successful kleptocracy.

In attempting to pivot away from these facts by casting them as untrue or unhelpful in a proper analysis of Putin, Stone appears either naive, uncaring or compromised.

As well, crediting our casting of Putin as a canny scoundrel to our love of cinematic villains — as Stone does by referencing "The Godfather" — is highly patronizing, dismissing the reasoned judgements of the many, many educated people who have weighed and watched the president's deeds and found him morally flawed. Vito Corleone is fiction. Putin is quite real. His critics, and the people he has abused, are well aware of the difference.

Stone adds, "We are really creating a fear and a situation in the American mind that is very dangerous. All of a sudden, it’s conveniently shifting to, 'Oh, forget about the war on terror. He’s the bad guy.'"

Again, it's hard to tell if the director is being disingenuous, ignorant or sloppy. No one has forgotten about the war on terror, a struggle in which Putin plays a complicated, yet crucial, role. Nor is the American wariness of Putin a paranoid reaction. It's born from a series of events and circumstances set in motion by Putin himself.

Then again, none of this should be surprising for the critical observer of Stone. The talented director has yet to find a complicated, multifaceted issue he cannot reduce and simplify into a pointed, spurious take.

While brilliant, "JFK" announced itself as a hard look at tough truths. In historical analysis, it stands as completely tailored to fit Stone's highly personal take on the events surrounding the Warren Commission and is perhaps the most fictionalized narrative about the death of the 35th president of the United States ever to hit the big screen.

The director presented "Natural Born Killers," his 1994 Bonnie-and-Clyde tale created with screenwriter Quentin Tarantino, as a critical takedown of America's obsession with violence. In retrospect, it embraced and exploited our lesser tendencies to little benefit — cheap thrills peddled for a quick buck. No one put up a "Natural Born Killers" poster in their dorm room because they thought it offered a sharp critique of their viewing habits.

Even Stone's Showtime adaptation of Howard Zinn's questionable but worthwhile "A People's History of the United States" flattened and foreshortened the source material to fit Stone's own contra mundum bent. The result was a conspiracy-minded clip package barely above the standards held in the more paranoid corners of YouTube.

To be fair, Stone views himself as a curious amateur in the field of journalism. "I don’t do this for a living," he admitted to Deadline. Yet, whether he says so or not, he acts as if he feels himself uniquely qualified to do what others have not — capture Putin as he is. He's wrong.

Stone clearly has some good intentions and valid thoughts to share. It's easy to want him to succeed. But, ultimately, he is compromised for a multitude of reasons and represents a poor match for a calculated, immoral head of state. That Stone pursues Putin in a way that seems to gloss over how truly dangerous he is to his own citizens — particularly the LGBTQ ones — suggests this title bout probably never should have happened.

A canny, clever man who rarely talks to Western media, Putin chose Stone to talk to for his own reasons, perhaps some of which are detailed above. It'll be interesting to see which fighter gets the upper hand.