Popping the bubble: The cinematic evolution of SCID in YA contemporary romance

Nicola Yoon’s “Everthing, Everything” unpacks “The Boy in the Bubble” and “Crystal Heart” to reveal a fairy tale 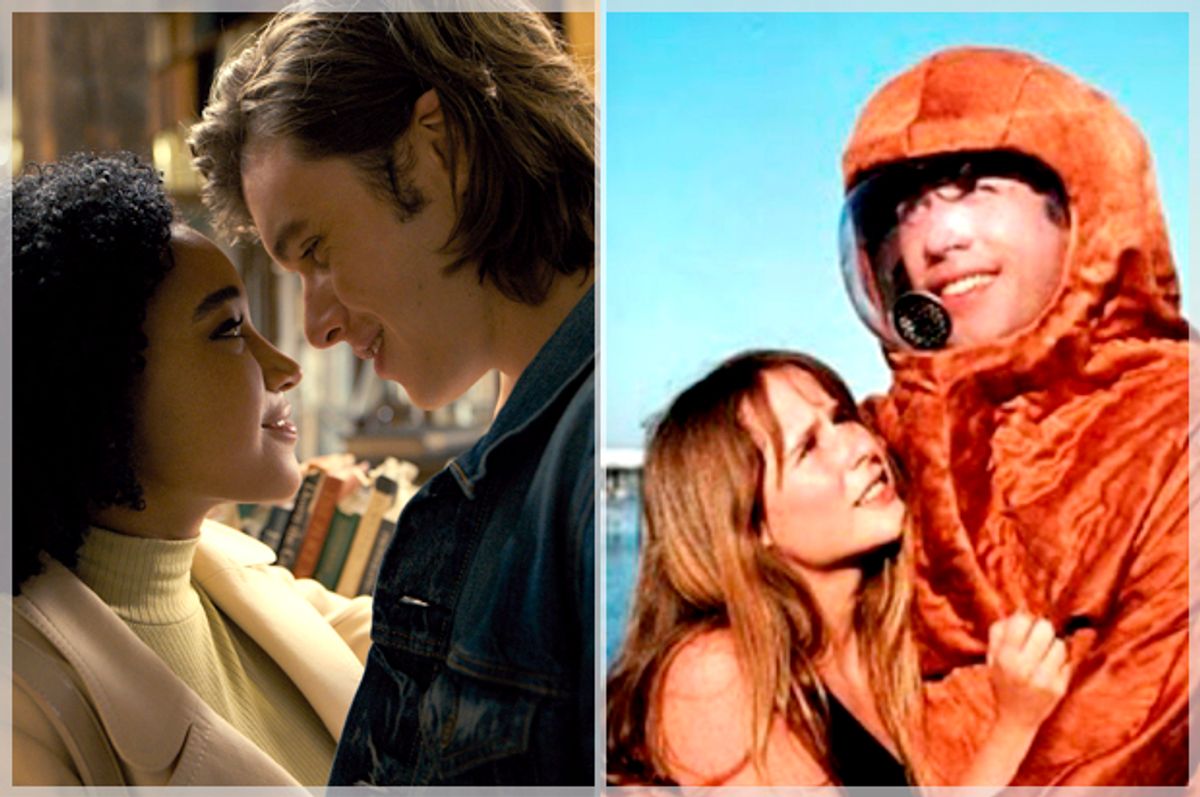 "Everything Everything;" "The Boy in the Plastic Bubble" (Warner Brothers Pictures/Spelling-Goldberg Productions)
--

At some point, the bubble bursts. For some of us, this may prove more traumatizing than for others, as may be the case if you happen to have SCID — Severe Combined Immunodeficiency — once referred to as “bubble boy disease.” This seemingly cutesy appellation is due not to John Travolta and the 1976 Aaron Spelling-produced, made-for-TV movie “The Boy in the Plastic Bubble,” but the case of David Vetter, the real-life boy who lived for 12 years in a sterile plastic bubble before dying of cancer from a bone marrow transplant in 1984. I remember sporadically watching him on the nightly news, particularly his lugubrious eyes peering through the NASA-designed inflated plastic tubing as a newscaster talked about how his parents tried to provide a semblance of normal life for him. Needless to say, the bubble did not look fun.

The story of David Vetter, both his disease and his life as a science experiment, spawned a spate of bubble movies that are as much about extreme parental attachment as they are about the illusion that free will can be contained and controlled. Unlike, say, “Carrie,” a film about a domineering/abusive mother and what happens next if you attempt to obviate menstrual education, these films capture not only a universal feeling of isolation, but also an adolescent sense of rebellion — the idea that the membrane is by nature porous rather than plexiglass. What’s more, the technology of the bubble might change, but the tender teenage heart beating inside remains the same.

Isolation and illness aside, nothing impedes a developing crush on your sexy next-door neighbor like living in a sterile bubble. Just ask Maddy Whittier (Amandla Stenberg), the cheerful, lovely bookworm of Nicola Yoon’s best-selling YA novel “Everything, Everything,” now a film directed by Stella Meghie.  Hermetically sealed inside her tony Los Angeles home — if you had the be confined to a bubble, this is definitely the one you would want — Maddy is 18, but has experienced zero contact with the outside world since she was diagnosed with SCID as a baby. Trapped in such sleekly schmancy environs, her entire world consists of the internet, her mother (Anika Noni Rose) and her nurse (Ana de la Reguera). That is, until floppy-haired loner Olly Bright (Nick Robinson) moves next door and bursts that bubble, baby.

“Teenagers are naturally philosophical and I love being a part of that conversation,” Nicola Yoon tells me at a press junket for the movie. “The way Maddy understands the world first is through her illustrations and her reviews. She brings the world in to where she is, but then she sees Olly as pure physicality where she feels trapped in her own. Your first romantic love opens you up to the world.”

If you’ve read the book or seen the previews, you know Maddy and Olly eventually hightail it to Hawaii where they have sex and eat snacks. The outside world, though hazardous, is beautiful and romantic and full of affordable resort hotels. The Big Twist at the end maintains the notion of imminent free will. Just as doctors feared what would happen to Vetter when he eventually became a teenager — though he appeared cheerful with his predicament on camera, he was often sullen and angry with his doctors — Maddy’s freedom comes with a price. Will she ever have emotional freedom? Do we all live in a bubble? And, once it pops, will there always be residue?

“Maddy’s a positive, happy person before she meets Olly,” Yoon continues. “Teenagers want independence and protection. They want to explore the world but from the safety of the parents’ house. You can’t have both.”

Or you can. That is, if you live in a bubble that has wi-fi and cell service. But not if it’s 1976 and you’re Tod Lubitch (John Travolta) and in love with your horsey, long-haired next door neighbor Gina Biggs (Glynnis O’Connor). While Tod gets to “leave” his bubble in a mini-bubble that his friends port to the beach and then later in a space suit he wears to high school — there’s even an amazing scene where he graduates in the space suit with the cap and gown over it —  it’s not until he realizes his love for Gina (and possibly her horse) that he crosses the threshold of his bubble and, unprotected, walks out of his parents’ house, hops into the saddle and rides off into the credits. Since we’re in Spell-o-vision, we don’t see Tod become ill. Instead he’s manumitted by a combo platter of teen love and Paul Williams ballads.

Ten years later, “Crystal Heart,” in some ways the platonic form of this oeuvre, raised the same ethical dilemmas as the movie asked the consequent question, what do you do when the boy in the bubble becomes the man in the bubble and the “next-door neighbor” isn’t a next-door neighbor but rock star Tawny Kitaen. How do you have sex through a glass wall while your parents are awake and in the house? And where’s the Windex?

While Maddy is the ultimate heroine — kind, smart, plucky — “Crystal Heart’s” Christopher Newley (Lee Curreri from “Fame”) is all dark side. Though all three bubbles share a certain fishbowl quality, Maddy’s feels overly regulated yet homey, Tod’s like a science experiment and Christopher’s like living inside an MTV video (not for nothing is Tawni Kitaen the writhing Whitesnake mascot). When Christopher breaks free, it’s violent; he throws a chair through the glass, shattering the crystal heart. Maddy’s escape involves credit cards and airplanes that magically don’t need identification for boarding. At the end of “Crystal Heart,” Christopher and and Alley (Kitaen) have a love montage and then he falls ill on the beach, eats her tears and dies. Thus the horseback ride of “The Boy in the Plastic Bubble” becomes a message that death is the only antidote to the illusion of control.

Though ultimately bittersweet, Yoon’s interpretation asserts a different, gentler premise that human connection is stronger than any wall and love may (or may not) set us free. Both the book and the movie engender necessary hope without being saccharine or sappy. While its predecessors turned obsession into escape routes, “Everything, Everything” shows the importance of the interior journey as well as the genetic imperative of contact with the outside world. After all, the princess can’t stay locked up in her tower forever.

“The book is a fairytale,” Yoon says. “It was important that Maddy be happy in her home and in her situation. Her mother made her feel safe and I didn’t want her to be in a prison as much as yearning for something more, something different. At first Olly thinks she’s cute and loves her optimism because his situation in his house isn’t so safe. The thing I say about love is that it changes everything.”

Like Travolta’s character in “The Boy in the Plastic Bubble,” David Vetter wore an actual space suit to leave his bubble (though his was more arduous to put on and had to remain attached via air-hose to the original parent bubble; apparently, Vetter wore the suit only seven times and then lost interest). When Vetter was 4 years old, he attacked the walls of the bubble, poking tiny holes in the plastic with a butterfly syringe someone had mistakenly left in one of the chambers. At that point, his treatment team decided it best to inform the boy of the invisible yet lethal dangers lurking in the outside world, where just a moment of contact might be the beginning or end of it all.