Supreme Court's decision on North Carolina redistricting was big, and opens the way for wider progress 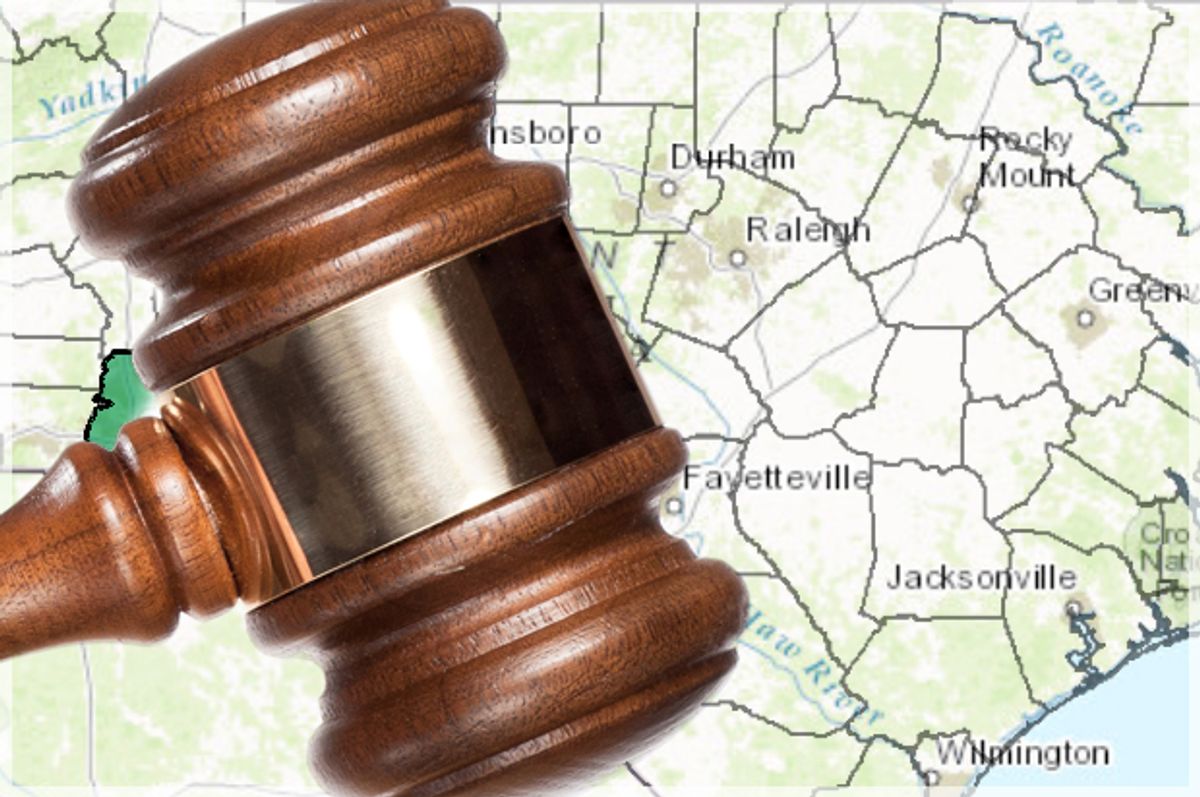 In the 2012 House elections, Democratic candidates got 1.4 million more votes than Republicans (roughly 59.6 million to 58.2 million), but won 33 fewer congressional seats, the result of a highly coordinated GOP effort to raise political gerrymandering to a level never seen before. On May 22, the Supreme Court handed down a significant decision, in a case called Cooper v. Harris, that could help chip away at that anti-democratic success. Two even more significant cases could come to fruition in the coming months.

Former Attorney General Eric Holder called the Cooper decision “a watershed moment in the fight to end racial gerrymandering.” Holder, who now chairs the National Democratic Redistricting Committee, went on to say, “North Carolina’s maps were among the worst racial gerrymanders in the nation. Today’s ruling sends a stark message to legislatures and governors around the country: Racial gerrymandering is illegal and will be struck down in a court of law.”

Despite Holder’s strong praise, on its face, Cooper v. Harris seems based a relatively well-developed aspect of election law. But in two footnotes, Justice Elena Kagan, writing for the majority, moves substantially toward treating race and party as proxies for one another, an important concept that could go a long way toward furthering cases against political gerrymandering, especially in the South.

This is a hotbed area of litigation right now, as can be seen from the Brennan Center’s April update, “The State of Redistricting Litigation,” covering a number of cases in eight states, the vast majority involving either racial gerrymandering, partisan gerrymandering or both. Most of those cases also involve maps drawn by Republicans, though not all.

In Cooper v. Harris, the court upheld a lower court ruling that North Carolina had engaged in unconstitutional racial gerrymandering by packing African-American voters into two congressional districts — districts 1 and 12. Blacks formed a near majority in both districts before redistricting, which had long histories of electing black representatives. The pretense that a clear majority was needed in order to satisfy the Voting Rights Act was in perverse fashion by North Carolina -- although in the case of the 12th district, the state claimed it had used partisan considerations in drawing the lines and only looked at race afterwards. The Court ruled unanimously that the 1st district was unconstitutional, but split 5-3 on the 12th.

In a partial dissent, Justice Samuel Alito railed against the decision for supposedly ignoring precedent regarding district 12. But Kagan, writing for the majority, cited precedent of her own — that of deferring to the trial court unless the Supreme Court could find that the lower court was clearly wrong that race was the underlying motive. She saw considerable evidence that the earlier judgment was well-founded.

At SCOTUSblog, Anita Earls, the executive director of the Southern Coalition for Social Justice -- who represents plaintiffs in a number of upcoming gerrymandering cases -- argued that the Cooper ruling “is not a watershed development in the theory of racial gerrymandering. Two of the central legal questions answered there had been answered in prior cases.” As far as the main text is concerned, she makes a strong case.

But election law specialist Rick Hasen — both at his blog and in the Washington Post — turns his attention to the footnotes, where Kagan explained that "in places where race and party overlap so much they can be treated as proxies for one another.”

This is a big deal because the law around racial gerrymandering is relatively well developed, but partisan gerrymandering has long been treated as beyond the reach of the law. Justice Anthony Kennedy has written that it’s not outside the law, but did not identify a standard courts could use to determine when impermissible gerrymandering has occurred. (More on that below.) So finding that race and party can be used as proxies for one another — reflecting the political reality referred to as “conjoined polarization” — can significantly expand the reach of existing legal doctrine.

Ironically, it was Republicans' cynical manipulation of the Voting Rights Act that effectively created this situation. Starting as far back as the post-1990 redistricting, Republicans have used the act to concentrate black voters in a few black-majority districts. That certainly got some African-American Democrats elected to Congress, but it also eroded the biracial electoral base of most white Southern Democrats and boosted GOP power across the South. This correlated with Southern whites abandoning the Democratic Party on a large scale, creating the condition of conjoined polarization.

Even before this began unfolding, it was foreseen by law professor Lani Guinier, who advanced the idea of proportional representation as a way to simultaneously preserve biracial coalitions and politically empower black communities. Guinier's essay, later collected in the book "Tyranny of the Majority: Fundamental Fairness in Representative Democracy," was too sophisticated for many white Democrats to wrap their heads around at the time.

When President Bill Clinton nominated Guinier as assistant attorney general for civil rights in 1993, she became the subject of a vicious racial smear campaign and was falsely tarred as a “quota queen.” Neither Clinton nor then-Sen. Joe Biden — chair of the Judiciary Committee at the time — bothered to figure out what she was saying. They bought into the false charges against Guinier and cut her loose without allowing her to defend herself in public. The failure to grasp the importance of Guinier's argument remains a blind spot for many Democratic elites to this day. But the Republicans' successful manipulation of the Voting Rights Act has now created a new vulnerability, which Cooper exposes.

In one footnote, Kagan wrote that the case against political gerrymandering could be made “even if the evidence reveals that a legislature elevated race to the predominant criterion in order to advance other goals, including political ones.” In another, she concluded by saying, “In other words, the sorting of voters on the grounds of their race remains suspect even if race is meant to function as a proxy for other (including political) characteristics.”

“Holy cow, this is a big deal,” Hasen commented just after quoting Kagan. “It means that race and party are not really discrete categories and that discriminating on the basis of party in places of conjoined polarization is equivalent, at least sometimes, to making race the predominant factor in redistricting. This will lead to many more successful racial gerrymandering cases in the American South and elsewhere, and allow these cases to substitute for (so far unsuccessful) partisan gerrymandering claims involving some of these districts.”

Some legal experts, including Anita Earls of SCOTUSblog, appeared not to register the significance of Kagan's footnotes — probably because they were footnotes, not main text statements crucial to the central arguments in the Cooper case. But legal footnotes can be profoundly influential. Footnote 4 in the United States v. Carolene Products Co. decision essentially put an end to what’s known as the "Lochner era," during which the Court recognized an unenumerated “freedom of contract” that effectively prevented legislatures from regulating economic matters such as child labor laws, wage and hour regulations, etc. Footnote 4 signaled a new era of judicial restraint, in which legislatures were largely deferred to in economic matters. Kagan’s footnotes may not be in quite the same league, but their long-term reach could well overshadow the main decision in which they appear.

There’s also a chance the Court will eventually tackle the issue of partisan gerrymandering head on. Princeton neuroscientist Sam Wang, whose sideline interest in elections since 2004 has made him a better — if less famous — analyst than Nate Silver, has turned his attention to the problem of partisan gerrymandering in recent years. Wang now has a website dedicated to the issue, and recently authored a paper in the Stanford Law Review, “Three Tests for Practical Evaluation of Partisan Gerrymandering,”

Wang notes that the Supreme Court has set a standard to test for gerrymandering — that it should demonstrate both intents and effects, and that it be recognizable by its asymmetry. But the asymmetry standard is only a broad principle, without any recognized analytical method that’s been recognized as judicially manageable. Wang proposes such a method:

This Article proposes three statistical tests to reliably assess asymmetry in state-level districting schemes: (1) an unrepresentative distortion in the number of seats won based on expectations from nationwide district characteristics; (2) a discrepancy in winning vote margins between the two parties; and (3) the construction of reliable wins for the party in charge of redistricting, as measured by either the difference between mean and median vote share, or an unusually even distribution of votes across districts ...

I apply these standards to a variety of districting schemes, starting from the original “Gerry-mander” of 1812, up to modern cases. In post-2010 congressional elections, partisan gerrymandering in a handful of states generated effects that are larger than the total nationwide effect of population clustering …

I propose that an intents-and-effects standard based on these tests is robust enough to mitigate the need to demonstrate predominant partisan intent. The three statistical standards offered here add to the judge’s toolkit for rapidly and rigorously identifying the partisan consequences of redistricting.

If it were still 1993, a similar fate might befall Wang’s sophisticated approach as befell Guinier. But we've come a long way. In a recent Los Angeles Times op-ed, Wang and co-author Brian Remlinger lay out a lucid explanation of what’s involved, with more seats now affected by partisan gerrymandering than at any time in the last five cycles of redistricting. On Wang's blog, he summarized it this way:

In 2017, over 70 seats are made uncompetitive, favoring both parties. The net effect is a change in the margin of about 15 Congressional seats, in a direction favoring Republicans. Considering that the outcome of Affordable Care Act repeal ... was decided by 4 votes, the advantage from gerrymandering is highly consequential.

There are partisan gerrymandering cases coming to the Supreme Court soon, from Wisconsin and from North Carolina. The L.A. Times op-ed concludes:

Five justices, including Associate Justice Anthony M. Kennedy, have expressed interest in establishing a standard such as the ones we have described. If Kennedy were to finally rein in gerrymandering, that would cap an already-distinguished legacy of his nearly 30 years on the Supreme Court.

It may be a vain hope to expect such a civic-minded act. But it’s worth remembering that Chief Justice Earl Warren regarded his own similar effort — striking down the practice of state legislatures to apportion without regard to population — as the greatest achievement of his tenure on the court. “One man, one vote,” was the phrase by which that decision was remembered. That call was immediately taken up by the civil rights movement, where it gained a much broader historical and political resonance that still echoes around the world today.

Could Kennedy step up and take a similarly momentous step? That remains to be seen, but in the meantime Cooper v. Harris marks an important step toward justice -- and one that should push the fight onward.