Martyrs against racism in Donald Trump's America: What happened in Portland was shocking, but not surprising

Two brave heroes died — and another was wounded — fighting white supremacy in Portland. They may not be the last 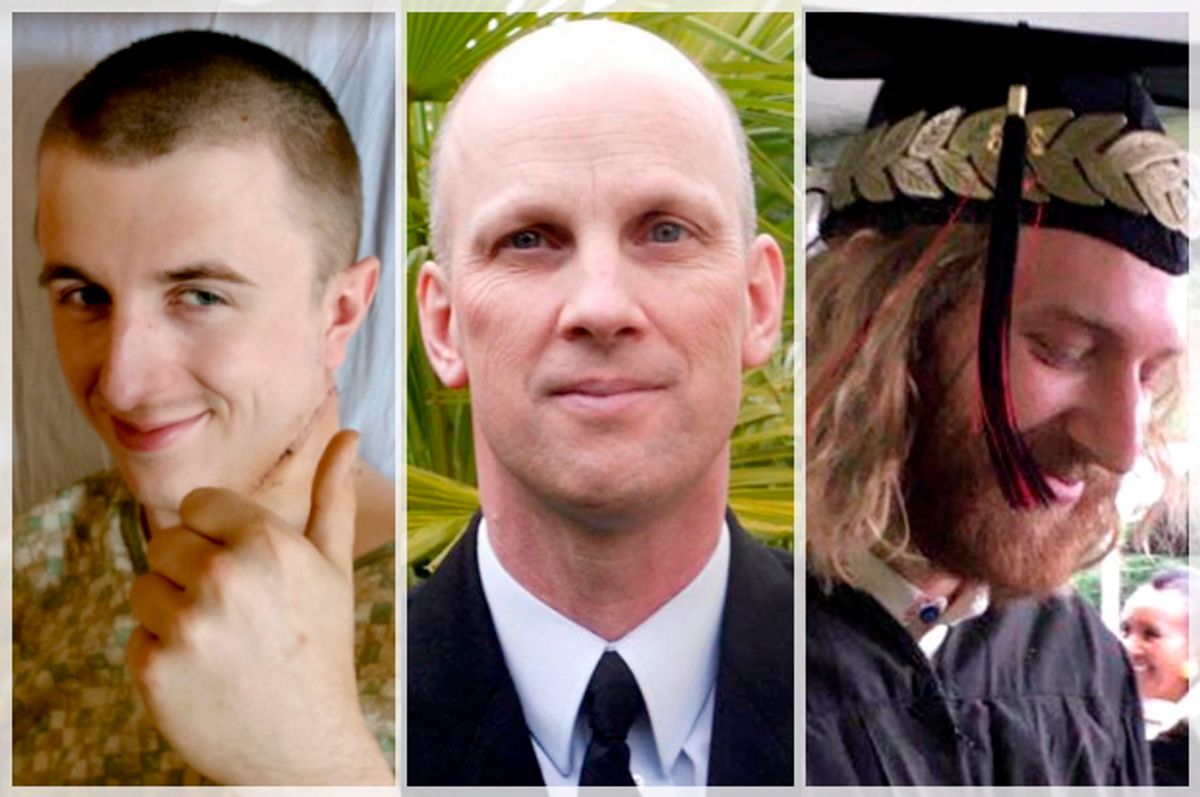 Ricky Best, Taliesin Namkai-Meche and Micah Fletcher are heroes. These three men acted selflessly and without concern for their own safety as they came to the aid of two women — one Muslim and the other African-American — who were being verbally assaulted and threatened by a white supremacist in Portland, Oregon, last Friday.

Jeremy Joseph Christian was a known white supremacist and a public menace. He attended public events while armed with weapons. He would walk the streets and attend political rallies and marches where he yelled racial slurs and pledged his loyalty to Adolf Hitler and the Nazis. What he did last Saturday was wholly predictable.

These two heroic men are not the only people to have been killed by white supremacists during the first few months of Donald Trump's regime.

About two weeks ago, a 23-year-old African-American college student was stabbed to death on the University of Maryland campus by a white supremacist. Richard Collins III refused Sean Urbanski's order to "Step left, step left if you know what's good for you." Urbanski then channeled the white supremacist logic of Jim and Jane Crow and the "black codes," allegedly killing Collins for refusing an order from a white man.

In March a white supremacist traveled from Baltimore to New York. His intent? To kill black men. To baptize his hatred with blood. He was successful. James Jackson walked up to Timothy Caughman, a black man he did not know and then plunged a sword through his chest.

These murders are part of a larger trend. There has been a record increase in hate crimes and other violence against Muslims, nonwhites, Jews and immigrants that began with Donald Trump's presidential campaign in 2016 and continues through to the present. The Anti Defamation League has documented how right-wing domestic terrorists — almost all of them white and Christian — have killed hundreds of Americans since 2007. The number of white supremacist and similar hate groups continues to grow in the United States, largely inspired by Donald Trump's political message.

After much pressure, President Trump finally offered a comment about the killings of Ricky Best and Taliesin Namkai-Meche. Of course, he did not mention that Christian apparently is a white supremacist. Likewise, Trump has been mute on the killing of Richard Collins III in Maryland. As I observed in a previous essay, Trump's relative silence about violence by white supremacists and their ilk against people of color, Jews and Muslims is expected and should not be surprising. Trump's political brand is one of white racism, nativism, bigotry, misogyny and a naked embrace of white identity politics and its Herrenvolk "Make America great again" dream of treating black and brown people (and women) like second-class citizens in their own country. Why would Trump risk alienating his most reliable and enthusiastic supporters?

As Mother Jones detailed in a recent profile of Matt Heimbach — a white supremacist who assaulted a black woman at a Trump campaign rally in Louisville, Kentucky — people like Christian and Urbanski are simply following the signals sent to them by the president:

Heimbach exemplifies and has ridden the wave of white-extremist radicalization since Barack Obama's election in 2008. . . . Heimbach rallied behind Trump's candidacy, and started wearing a red "Make America Great Again" ball cap everywhere. The footage of him shoving Nwanguma in Louisville was emblematic of how Trump's nativist dog whistle was pulling extremist sentiment into the mainstream. . . .

Even if the odds that Heimbach's lawsuit will succeed are infinitesimal, the case is a revealing indication of the far right's symbiotic relationship with Trump. White nationalists, apparently, really do believe the president has been nudging them to commit violence, or at least promising to tolerate it if they do. When in February sources inside the White House told reporters that Trump planned to no longer target white supremacists as part of the government's anti-terrorism efforts, the editor of the neo-Nazi site Daily Stormer cheered, "Yes, this is real life . . . . Donald Trump is setting us free." Others were heartened by Trump's silence in the wake of the murder of six people at a mosque in Quebec City by a white nationalist that same month. The rioters in Berkeley, California, last weekend — some wearing MAGA hats — seem to have heard the same music that Heimbach did last March.

Donald Trump's relative silence is even more deafening and obvious given the fact that two of the recent murder victims were affiliated with the U.S. military. Richard Collins III, killed in Maryland, was a newly commissioned second lieutenant in the U.S. Army. Ricky Best, killed in Portland, had served in the Army for 23 years, much of that time as a platoon sergeant. It would seem that loyalty to white supremacy has a greater pull for Donald Trump than the faux patriotism and flag-waving that Republicans and conservatives are usually so quick to adopt.

It takes no great leap of imagination to envision the paranoia, panic, bloodlust and mouth-frothing rage that President Trump, the right-wing media and Republicans en masse would now be channeling if a Muslim attacker had slit the throats of white Christian Americans anywhere in the "homeland." It would be a depicted as a national emergency of the first order and a justification for God only knows what kind of draconian crackdown.

Many Americans are shocked by the recent acts of racist violence in Portland and Maryland. That shock is perhaps understandable, but we should not be surprised. The country that twice elected a black man to the presidency is also the same nation that was founded on the centuries-long enslavement, rape and murder of African-Americans as well as genocidal violence against First Nations people. These sins are part of America's national character; they are burned into our civic and cultural DNA. America also elected a plutocratic authoritarian racist as president, in the form of Donald Trump. He reflects the values held by many tens of millions of white Americans.

And one cannot overlook the long history of murderous violence by white supremacists in the United States. Some examples:

Donald Trump has been president for approximately four months. For American democracy to survive his reign there will need to be more heroes, more people like Ricky Best, Taliesin Namkai-Meche and Micah Fletcher who will do the right thing even at great personal cost because their morality and personal honor demand nothing less. Those men are two martyrs and one wounded warrior in a history of resistance to Donald Trump's America that has yet to be written. Their names will not be forgotten.