No, the "grown-ups" won't save us: A favorite Beltway fantasy bites the dust again

Donald Trump's supposedly respectable advisers have become enablers to a regime of lies, incompetence and idiocy 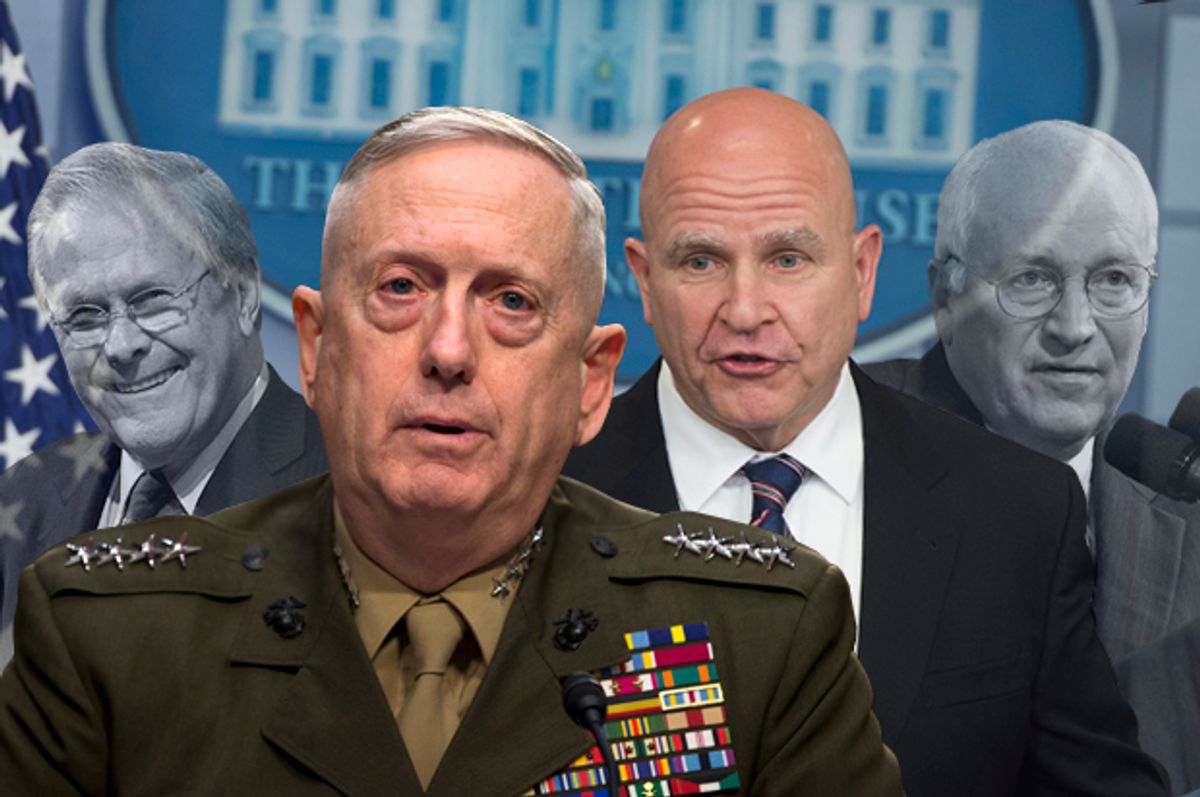 In January 2001 after a protracted postelection legal battle that ended with the Supreme Court seating George W. Bush in a 5-to-4 partisan decision, the Beltway establishment was giddy that the jejeune Bill Clinton administration was finally out of office and responsible adult leadership was back in town. The late conservative commentator Kate O'Beirne memorably put it this way on the eve of the inaugural:

There's a whole lot less Hollywood this weekend than there is Houston, and it's not a boomer — baby boomer inaugural, despite the fact that George W. qualifies as a baby boomer. The grownups are back in charge.

Whatever reservations Washington may have had about the incurious George W. Bush, they were soothed by the presence of the old Republican guard represented by Dick Cheney, Donald Rumsfeld, Colin Powell and others who reminded them of a time before Bill Clinton and his boomer buds had roared into their "little village" and "wrecked the place."

The new president himself was a man who acted like a frat boy most of the time and could barely string together a coherent sentence. Recall just a few of the memorable quotes from the man who would soon be sitting in the Oval Office as these pundits were excitedly welcoming the adults back to Washington:

"Rarely is the question asked: Is our children learning?"
— Florence, South Carolinea, Jan. 11, 2000

"We'll let our friends be the peacekeepers and the great country called America will be the pacemakers."
— Houston, Sept. 6, 2000

It was obvious that our new president's antenna didn't pick up all the channels, if you know what I mean. But the pundits didn't care because it wasn't important. The grand poobahs of the GOP establishment would make America great again.

We all know what happened: Sept. 11. Democrats rallied around the president and his approval ratings shot up to a 90 percent and stayed at 60 percent to 70 percent for the better part of the next two years. This was when the grown-ups led the nation — first into a war in Afghanistan that has really never ended, and then into Iraq, making their longtime fever dream of an occupation come true.

Their agenda had little to do with the challenges of terrorism. These men of the past were fighting the last war — the Gulf War of 1991, which many of them believed had been mistakenly left unfinished. Indeed, even the untried son, Bush Junior, openly proclaimed that he was proposing the war as an act of revenge for an earlier assassination attempt on his father, former President George H.W. Bush. And many members of the administration had signed on years before to an American imperialist agenda, with an invasion of Iraq serving as the fulcrum for "benevolent global hegemony."

It turned out that these éminence grises, these respectable men in suits and ties who were going to bring honor and dignity back to the White House, were radicals. And the man they were charged to instruct in the ways of Washington was more than willing to be just as radical as they were.

One would have thought Americans had learned their lesson after having lived through the disaster of the George W. Bush years. But 16 years later the Republican Party served up another unqualified, ill-equipped nominee, and he, too, became president without winning the most votes. Once again the establishment tried to reassure the public that he would be held in check by the vice president and the respectable appointees: Gen. Jim Mattis at the Pentagon, Gen. John Kelly at Homeland Security and — after the first choice was fired — Gen. H.R. McMaster as national security adviser. Since the military is the only institution left in America that maintains even the slightest respect among the public, this seemed like a good idea. These men had commanded legions; surely they could control the likes of President Donald Trump.

That's not happening. The people who were supposed to help Trump become a responsible leader have instead followed their boss into his morass of lies, corruption and incompetence. As Tom Ricks (who encouraged these people to join the administration for the good of the country) pointed out in a piece for Politico, they have degraded their reputations without making the slightest improvement in Trump's performance as a leader.

Defense Secretary Mattis embarrassed himself on CBS News' "Face the Nation" on this past Sunday by bizarrely asserting that by appointing him, a big supporter of NATO, the president had endorsed the alliance. This came despite the fact that Trump had behaved like an ill-mannered boor at the annual NATO meeting in Brussels and refused to publicly affirm the mutual defense imperative known as Article 5. Mattis claimed that it doesn't matter what Trump said; we should be content that he deigned to attend the meeting at all.

Also on Sunday the secretary of homeland security, Gen. Kelly, appeared on NBC News' "Meet the Press" and blithely dismissed reports that President Trump's son-in-law Jared Kushner had asked the Russian ambassador to use secure Russian embassy communications facilities for a covert channel to the Kremlin. Kelly said, "Any time you can open lines of communication with anyone, whether they're good friends or not-so-good friends, is a smart thing to do." His reputation, already strained by his willingness to enact Trump's draconian immigration agenda, is now no better than that of a partisan hack.

McMaster is the only one of the Trump "grown-ups" still in uniform. As Ricks pointed out, that means he is required to tell the truth and shun conduct unbecoming of his position. Ricks suggested that McMaster should feel compelled to resign rather than continue to spin Trump's obviously inept behavior and Ricks now believes that these experienced hands are doing nothing more than enabling a president who will never listen to them.

The lesson in all this is that it is foolish to count on advisers and appointees to make up for what's lacking in our leaders. These aides can be malevolent or ineffectual, but either way they can't fix the fundamental problem of an unqualified president. The political establishment needs to stop assuming they can. The person sitting behind the desk in the Oval Office is the one who needs to be a "grown-up." It's a basic requirement of the job.