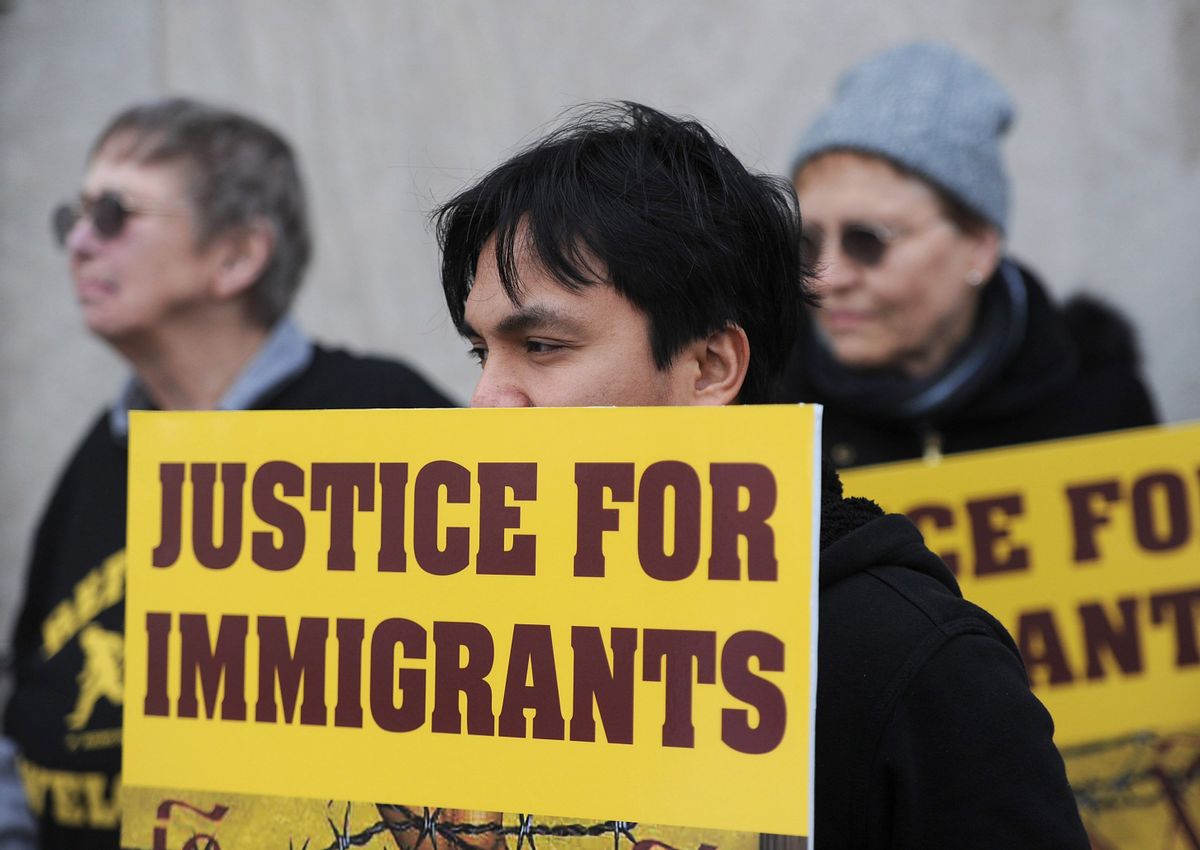 The fight over Senate Bill 4, an anti-immigrant Texas bill signed into law earlier this month by Gov. Greg Abbott, already touched on a number of contentious issues, such as racism, the rights of immigrants and the proper role of law enforcement. After the events at the Texas state capitol on Monday, we can also throw the basic right to free speech onto the pile. One state legislator, Rep. Matt Rinaldi, a Republican, attempted to use the threat of detention and deportation to intimidate Texas residents from protesting the bill.

Abbott signed the bill, which pro-immigrant activists call a "papers please" bill, on May 7, but activist groups called for a protest on May 29 because it was the last day of the state legislative session. Sheridan Aguirre, a field communications manager for the immigrant rights group United We Dream, explained over the phone that this was part of the kickoff to what activists are calling the "summer of resistance" to the law, which is slated to go into effect Sept. 1.

Hundreds of protesters showed up at the state capitol to register their anger with the statute, which allows police at will to demand proof of citizenship status from residents and requires local law enforcement to comply when Immigration and Customs Enforcement personnel request that state employees detain people suspected of being undocumented immigrants.

The protesters unnerved Republican legislators who support the bill, and Rinaldi, in an obvious fit of rage, declared on Facebook that he had called ICE on the protesters. When Democratic state legislators confronted Rinaldi over his threats on the House floor, a shoving match ensued and Rinaldi allegedly threatened to shoot Rep. Poncho Nevarez in the head during an argument. Rinaldi tacitly admitted to making the threat, arguing that he was  acting only in self-defense.

Democratic state Rep. César Blanco, in a phone conversation, accused Rinaldi of trying to "intimidate people from exercising their First Amendment rights," adding that the protests had been peaceful.

"It’s a form of intimidation," agreed Lizet Ocampo, the political director for People for the American Way, in another phone conversation. "It’s offensive, too, to see a group of protesters who obviously look Hispanic and call ICE on them.”

One of the biggest objections that activists have against SB4 is that the provision allowing police to demand proof of immigration status from any random person will encourage racial and ethnic profiling. This is part of the reason that the American Civil Liberties Union, along with the small Texas border city of El Cenizo, is suing the state over the law.

“Under SB4, local authorities will lose control over public safety and Texans will suffer from discrimination because of the color of their skin, accents, or background,” Lee Gelernt, deputy director of the ACLU's immigrant rights project, said in an emailed statement.

Ocampo noted that Rinaldi's action "provides a visual of what’s behind this legislation, which is an animosity towards Latinos and Mexican immigrants in the state."

Blanco argued, “Because individuals in the gallery were majority Hispanic, [Rinaldi] assumed people there were undocumented," and he added, “The fact that a Republican member assumed that people who were protesting were there undocumented says everything about SB4.”

Aguirre, whose group helped organize the protests, said, “The reality is that it was a mix of folks who were immigrants [and] folks who were U.S. citizens," adding, “It’s a moment that exposed the racists for who they were."

While there's no evidence that ICE actually showed up to harass or detain anyone, there is good reason to fear this tactic, even for people who are citizens or living here legally. Already some bone-chilling stories have circulated about ICE's detaining of legal residents or U.S. citizens apparently singled out due to their ethnicity or because they speak with an accent.

Last week the Los Angeles Times reported on the case of a 59-year-old woman who is naturalized U.S. citizen but had been detained by ICE agents until her daughter showed up with her passport. The ACLU is representing another naturalized citizen who claims to have endured two such detentions. Being a citizen or holding a green card evidently doesn't offer much protection when ICE agents are empowered to make snap judgments based on little or no information.

In recent months, political media outlets have carried a lot of debate about "free speech," due to a series of high-profile protests against authoritarian or racist speakers on campus. Legitimate debate should take place over whether free speech protects the right to a well-paid platform to espouse racist theories.

But what is clearer — or should be, anyway — is that the First Amendment explicitly protects a free press and "the right of the people peaceably to assemble, and to petition the government for a redress of grievances."

It is these more explicit rights that have been attacked in the space of a week by Republican politicians. Last week Montana congressional candidate Greg Gianforte allegedly assaulted a reporter for daring to ask him a question (and went on to win his special election anyway). This week Rinaldi used the threat of deportation in an effort to silence protesters. Between these two incidents, Texas Gov. Abbott also took a swipe at First Amendment rights, "joking" to journalist Patrick Svitek about shooting reporters.

Unsurprisingly, the same people who see the death of free speech when college kids shout down racists don't seem to feel quite so concerned when political candidates or elected officials use the threat of violence or police harassment to scare people who are exercising their constitutional rights. Republicans have deflected criticism of Gianforte's behavior or joked about it. Rinaldi's efforts to intimidate protesters have largely been ignored in conservative media, save for a little bored sneering at Democrats for daring to take issue with it.

It took very little digging to identify Rinaldi's hypocrisy on this issue. In 2015 he opposed a bill that would make the names of donors to lobbying groups more transparent to the public; he claimed that free speech protects the right to anonymity. Now he wants to sic a widely feared federal law enforcement agency on those who peacefully assemble to petition their government.

Despite the ugliness in the Texas legislature, however, both Ocampo and Aguirre expressed confidence that activists opposed to SB4 would not be cowed.

“Latinos and Mexicans have been a part of Texas since before Texas was Texas," exclaimed Ocampo, who predicted that this incident would illustrate the dangers of racial profiling and encourage people to become more involved. She pointed out that California's Proposition 187, a broad anti-immigrant law passed in 1994, had a galvanizing effect on Latino voters in that state and this helped transform it into the impregnable Democratic stronghold it is today.

“More than being scared, they are outraged," Aguirre said of the opponents of SB4. “That threat is not going to stop us from showing up.”