Drag me to hell: "House of Cards" shambles onward in season 5

Everything you loved or hated about the series is still present, only slower 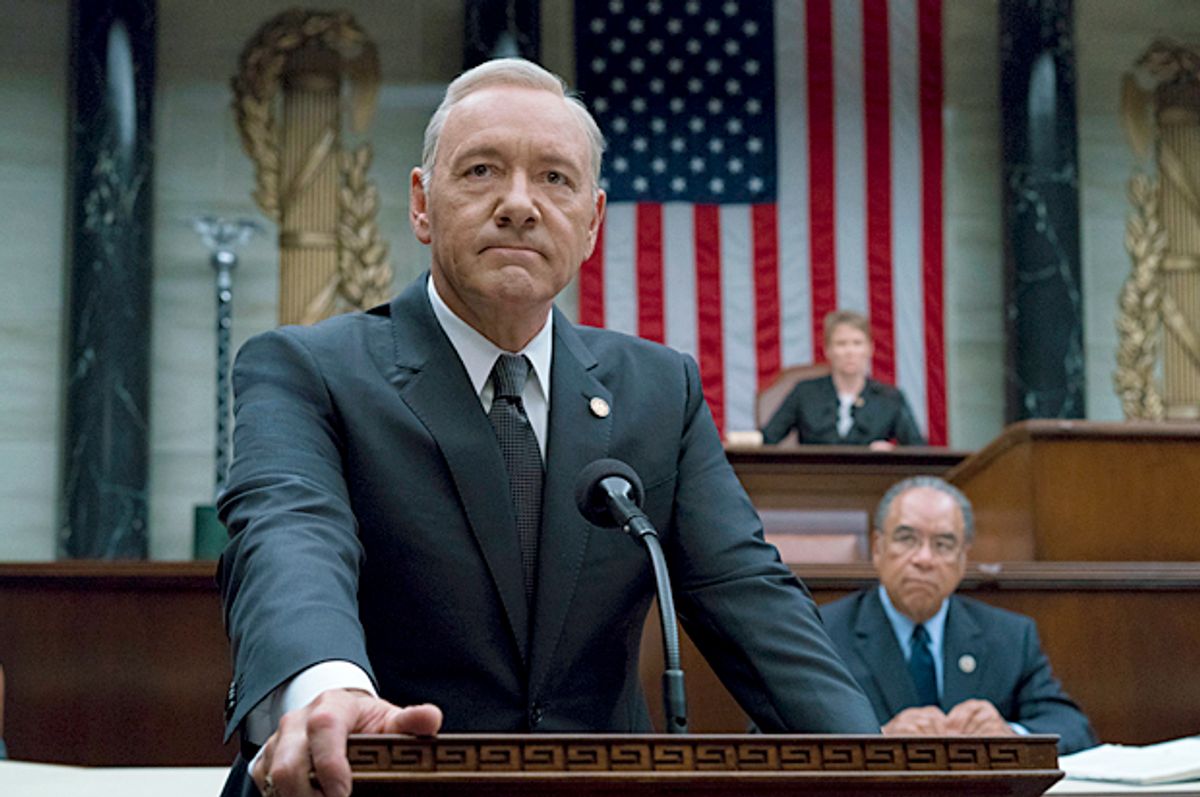 In an alternate universe, the fifth season of Netflix’s “House of Cards” could have been a devilish antidote to the political unraveling of Washington. After all, during President Barack Obama’s administration the drama presented the evil shadow version of D.C. governance, ruled by a corrupt, self-serving Democrat who feels peddling themes of hope and possibility to the American people was beneath him.

Alas, as I type these words, America is a mere 131 days and a few hours into Donald J. Trump’s presidency. The popular joke about this is that Trump’s ceaseless stream of alarming political gaffes, thuggish legislative style, disquieting tweets and questionable grasp of the English language (“covfefe”?) have made four months and change feel like eons. Time itself feels as if it's straining against the backward march of history, making the hours, days and weeks feel longer even as many of us sense the ravages of aging on our bodies more acutely than ever.

It's funny; that’s also how watching these new episodes of “House of Cards” feels.

Five seasons in, “House of Cards” still trades in predictable scripting that recycles the same themes time and again. Even now we’re made to contend with an endless march of one-note side characters and expedient problem-solving via criminality, a set of moves that lost their ability to entice and shock some time ago. These include a character or two whose fates are left unknown by the end of the season, a murder or three and a few reversals that change the trajectory of the show’s first couple Francis Underwood (Kevin Spacey) and his wife Claire (Robin Wright), a current candidate for vice president.

Such ragged repeats slump atop the feeling that watching Spacey’s Francis Underwood scheme and connive and cajole may have lost its charm. Yes, his Underwood is still strategizing how to hold on to power, ready to steal an election yet again and use fear to keep voters complacent. At the end of the fourth season Underwood and Claire promise viewers, “We make the terror.” But in truth, most of what their actions do in this new batch of episodes is make each hour drag unnecessarily.

The latest season of “House of Cards” is the first helmed by showrunners Melissa James Gibson and Frank Pugliese. The pair took over after Beau Willimon exited the series, and longtime fans probably won’t notice much of a difference between their style and that of Willimon. To those hoping that a change of the guard would result in more efficient plotting and a speedier pace, that’s not great news.

Mind you, a number of people still love “House of Cards” because it takes its time. One viewer’s storytelling gridlock is another’s idea of methodical pacing. To the second set, the new season’s prolonged focus on electoral shenanigans may feel just right, and the fact that it takes about eight episodes to settle Underwood's election battle with his righteous opponent Will Conway (a miserably dull Joel Kinnaman) is justifiable. (Full disclosure: On several occasions I got up in the middle of an episode wondering whether I’d miss anything significant if I keep the video running while I did a sink full of dishes or enjoyed a thorough flossing of my teeth. The answer is no, I did not.)

Given the spice with which Gibson and Pugliese spike the plot in the final three episodes of the season, however, viewers might wish to arrive there sooner. The turn “House of Cards” takes in the closing hours of this season is so much fun, in fact, that it actually makes me curious about how the next season will go. And that’s something I have never, ever said.

Some may ask the question about how well this new season of “House of Cards” will fare with viewers given how closely the events in the story mirror what’s happening on Capitol Hill. (Netflix keeps its viewership figures to itself, so we may never know.) There’s a good reason that comedy about politics is popular right now: Laughter is emboldening escapism. Parody and satire help to disempower fear. With this administration, it also serves to piss off the thin-skinned tyrant occupying the Oval Office.

Watching “House of Cards,” meanwhile, doesn’t feel altogether different from consuming watching cable news. To underscore that point, Ann Curry, Rachel Maddow, Charlie Rose and Connie Chung all make cameos during this season. Other parallels to reality are amazingly coincidental; most of this season’s production was complete by the time the November election rolled around. But consider that both Underwood's and Trump’s administration brazenly obfuscate the truth and manipulate the media. Each is taking advantage of a population that’s politically fractured to forward their own ambitions, and each is dealing with a terrorist threat (called ICO in the series) and Russian influence in our government’s dealings.

Yet the Underwood White House is infinitely more watchable than Trump's in no small part because of Wright’s performance as Claire, a Lady Macbeth turned veritable political force. (Don’t dare to draw the obvious comparison: Claire Underwood would dine on Ivanka Trump as part of a protein-centric breakfast.) Claire’s rise to secure the vice presidential nomination of her party is one of the more implausible details of an increasingly risible plot, but at least that turn of events means a more central role for Wright, who, along with Michael Kelly’s Doug Stamper, provides one of the few arguments for this show to continue.

Neve Campbell’s LeAnn Harvey is a serviceable pawn to the Underwoods but isn’t given much to make her performance particularly distinct. She’s just kind of there, as is Campbell Scott’s Republican consultant Mark Usher. Patricia Clarkson’s character, in contrast, is friendly and subtly mesmerizing in the way that only the most lethal of untrustworthy forces can be — so much so that a person might not mind that she just seems to materialize out of the ether. All of a sudden she’s just there, fomenting her own agenda, but it’s fine because she’s interesting.

Admittedly, a fair share of the audience may still find Spacey’s expression of Underwood’s malevolence to be delectable. Great villains have a timeless quality. And Spacey in episodes of prior seasons has captured the character’s unadulterated spleen quite beautifully, especially as he revels in breaking the fourth wall, directing pernicious monologues and mischievous sneers toward the audience. The actor performed these speeches in a collusive tone that made viewers Underwood’s silent, impotent witnesses and accessories in equal measure.

But in the new season Spacey is all in on Underwood’s oiliness, producing a figure who is part Snidely Whiplash and part Colonel Sanders, extra grease on the side. For one speech, when Underwood methodically lays out his method for building a fire (as a metaphor, understand) is lovely if a viewer can get past the notion that Spacey is talking with his mouth full, and what his mouth happens to be full of is the ghost of Jefferson Davis.

At least Underwood, despite Spacey’s unintentionally cornpone affectations, is better at smooth-talking wide swaths of the American public than his real-world counterpart. When it comes to keeping a number of his mortal sins hidden behind the army of other skeletons in his closet, the narcissistic Underwood is an absolute pro. But if he’s going to burn it all down, I do wish he’d hurry up and get on with it.