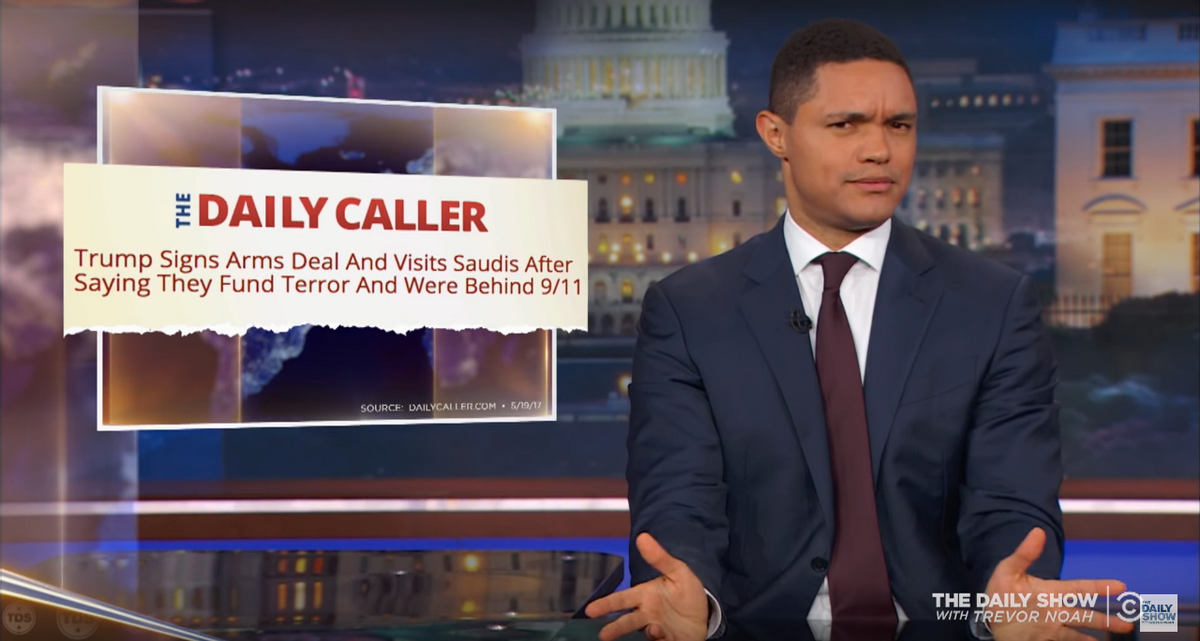 "Daily Show" host Trevor Noah returned from the holiday weekend Tuesday with a biting monologue about President Donald Trump's foreign trip. The South African comedian noticed that the president got a little handsy on his tour abroad — with his touching of a glowing orb and the Western Wall, and a hand check from his wife, Melania.

But perhaps the biggest development to come out of his trip was the arms deal the president signed with Saudi Arabia. Noah found it somewhat difficult to process the whole arrangement.

"The president also signed a deal to sell the Saudis $110 billion in weapons, which, can I just say for a second, what a load of bullshit," Noah said Tuesday night. "Trump goes to Saudi Arabia and never once mentions radical Islamic terrorism, which is what he condemned Obama for, right? And, on top of that, he signs the biggest arms deal in American history with the Saudis — the same people he even said were behind 9/11. Really?

"Was Trump sitting there, like, 'Alright, you got to promise you aren't going to use these to do another 9/11,'" Noah said, lampooning Trump in a high-stakes negotiations with the Saudis.

Trump has deep ties with Saudi Arabia. During the campaign, even though Trump has blamed the Saudi royal family in the past for the Sept. 11 attacks, he registered eight companies connected to hotel interests in the kingdom. Saudi Arabia even provided Trump cover after he signed the travel ban affecting seven majority-Muslim countries.

It should come to no surprise that Saudi Arabia has proven to be a formidable ally for the Trump administration.