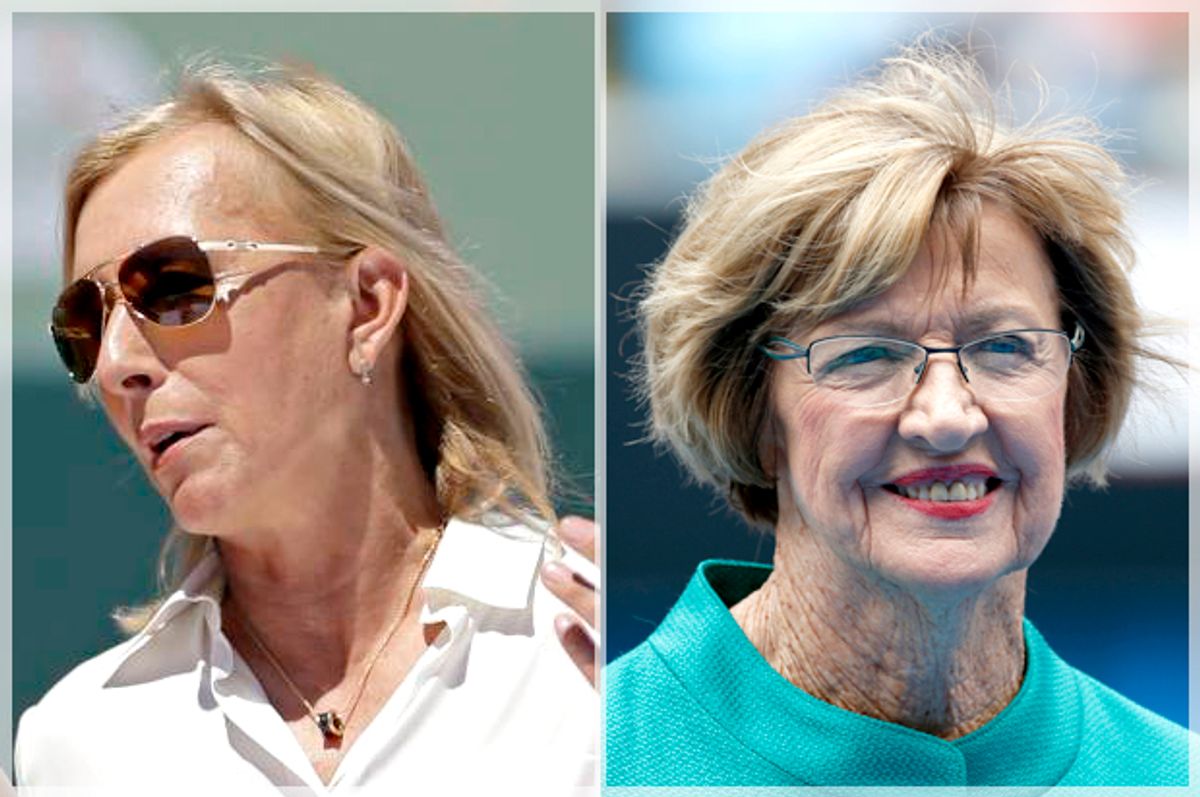 Eighteen-time Grand Slam singles titles winner Martina Navratilova called for a renaming of one of Australia's premier tennis venues, the Margaret Court Arena, on Thursday in an open letter published in the Sydney Morning Herald.

The arena's namesake, tennis-legend-turned-Christian-pastor Margaret Court, has been under fire for recent comments, which are being called homophobic and racist.

On Thursday, Court announced that she would stop using the Australia-based Qantas Airlines, after its CEO stated his support for same-sex marriage.

"I am disappointed that Qantas has become an active promoter for same-sex marriage," she said in an open letter published in The West Australian. "I believe in marriage as a union between a man and a woman as stated in the Bible. Your statement leaves me no option but to use other airlines where possible for my extensive traveling."

In 2011, she voiced her opposition to same-sex marriage saying that gay people "are aggressively demanding rights that are not theirs to take."

Court has also previously attacked Navratilova, and other lesbian tennis players, saying that they ruined the sport. She even went so far as to accuse them of "luring young girls on the tour to parties to turn them into lesbians."

It was in response to these and other comments that Navratilova penned her open letter.

"Sporting venues named for athletes, or any place, really, named for whoever, are so named for one reason," she wrote. "That reason is their whole body of work. In other words, it is not just for what this person did on the field, on the court, in politics, arts or science, for instance, but also for who they are as human beings."

She says that she and other members of the tennis community do not believe that the character of Court reflects the values of the community as a whole.

"We celebrate free speech, but that doesn't mean it is free of consequences — not punishment, but consequences," she continued. "We should not be celebrating this kind of behavior, this kind of philosophy. The platform people like Margaret Court use needs to be made smaller, not bigger. Which is why I think it's time to change your name. And I think the Evonne Goolagong Arena has a great ring to it. Now there is a person we can all celebrate. On every level."

Navratilova refers to Evonne Goolagong Cawley, the Australian 14-time Grand Slam champion who was also the first person of Aboriginal descent to win any major tournament in the sport.

For her part, Court, remains the player — man or woman — with the most Grand-Slam singles titles, having taken home 24 trophies (11 in the Open era). Serena Williams is close behind her with 23. All four women, Goolagong Cawley, Court, Navratilova and Williams, have held the No. 1 position in the worldwide rankings for significant periods of time.

Court has not yet responded to Navratilova's letter.