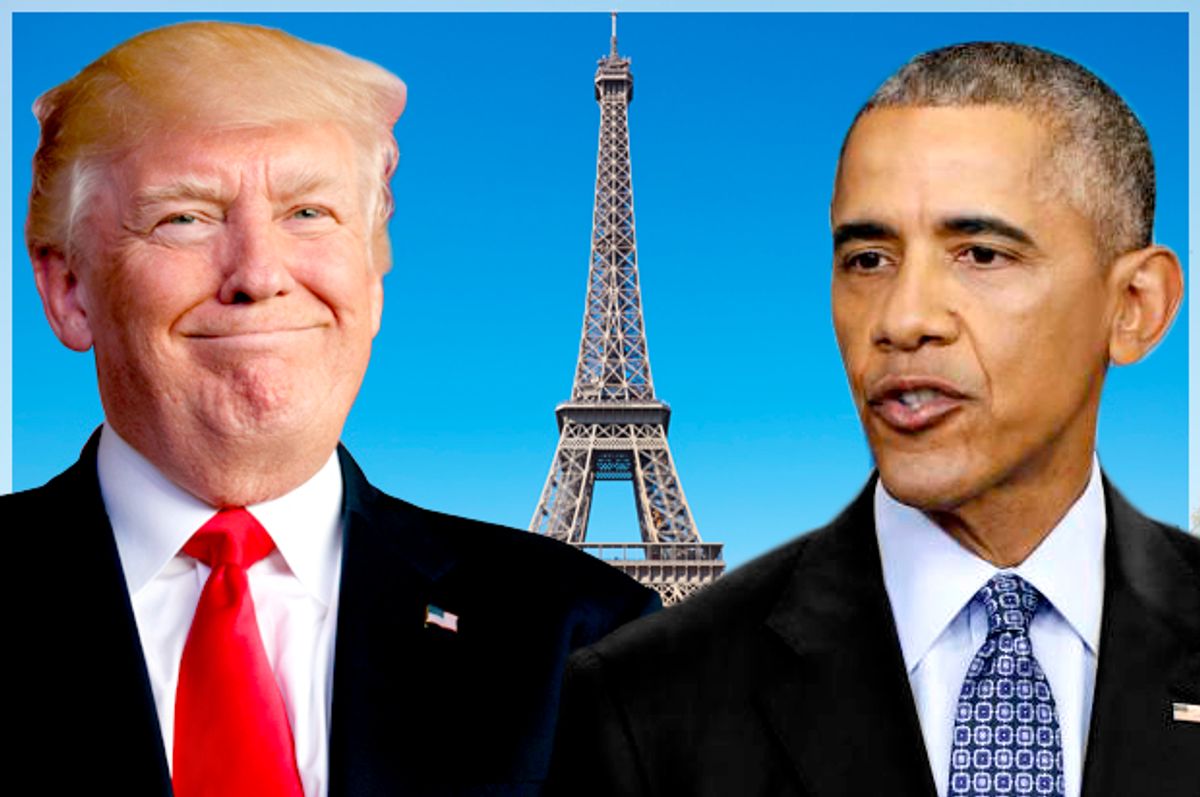 On Thursday afternoon Donald Trump announced, with great reality-TV star fanfare, that the United States will withdrawing from the Paris climate agreement. While we've long come to expect the Great Orange to act like a complete fool at all times, this decision is so unilaterally stupid that it's hard to believe that even someone as nasty as Trump could make it. The decision was met with a round of perfectly true op-ed articles explaining exactly how screwed the United States will be because of this, not just because fighting climate change is a moral imperative but because our nation's economic and international interests are tied up in moving toward the clean energy goals set forth by the Paris agreement.

It doesn't make rational sense for Trump to pull out of the Paris accord. Even Trump's secretary of state, Rex Tillerson, has argued against withdrawal, as has Tillerson's former company, Exxon Mobil. The traditional reasons for conservative opposition to cleaner energy — protecting energy profits — don't hold up as well as they used to. So why is Trump doing this?

The likely answer is, I'm afraid, a disheartening one: Trump's anti-environmentalism is ultimately not about the gross but rational pursuit of profit, so much as it's the result of a nihilistic anti-conservationist ideology that has been fomented for years on the far right. It's an ideology concerned more with hating liberalism and undermining former President Barack Obama's legacy than with petty matters like peace or prosperity.

As evidence for this theory, look no further than the ongoing fight over the Bears Ears National Monument in Utah, which is under attack from conservatives and the Trump administration. It's a battle that is far more about wanting to stick it to the liberals than about making money.

For the past several years, a group of Native American tribes have been asking the government turn the 1.35 million acres of Bears Ears lands into a federally protected area. Utah's congressional Republicans, led by Rep. Rob Bishop, tried to circumvent those efforts by proposing a bill that would offer protections to Bears Ears while leaving some areas open to mining and oil drilling. The Obama administration would have allowed that compromise, but Bishop couldn't get his bill passed. So in the waning days of his administration, Obama declared Bears Ears a national monument. Since then the Utah Republicans, Bishop especially, have been livid.

“At the end of the day with the Utah congressional delegation, it comes down to sour grapes over Rob Bishop not being good at his job," Aaron Weiss, media director for the Center for Western Priorities, said over the phone.

It's a story I've heard from many other sources in the months that I've covered the battle over Bears Ears: Sure, Bishop wants to protect oil and gas interests in the area. But a lot of what motivates him appears to be a deeply rooted unwillingness to have his state be home to anything that could be considered an Obama accomplishment.

Under pressure from Bishop and other Utah Republicans like Rep. Jason Chaffetz, Trump signed an executive order in April ordering Secretary of the Interior Ryan Zinke to review national monument designations and consider the possibility of revoking their status — something that has never been done in the century plus that presidents have been designating national monuments.

Weiss noted that during Trump's bill signing he accused Obama of an "egregious abuse of power," even though other presidents previously have used the same powers to protect the Grand Canyon and Death Valley. It's this double standard that illustrates, Weiss argued, how central Obama hatred is to Republican animosity to Bears Ears National Monument.

This push toward rescinding the Bears Ears designation is "certainly not because the public wants it," said Dan Hartinger of the Wilderness Society, in another phone interview. "A lot of it has to do with ideological opposition to conservation and, frankly, to public lands ownership generally.”

Zinke's process of re-evaluating the Bears Ears designation reinforces this sense that Republican motivations on this issue are largely about are retroactively delegitimizing Obama's presidency. Zinke appears to be rushing through the review process, barely even bothering to pretend to care what the public thinks about how he handles publicly owned lands.

Generally, federal agencies offer a 60-day comment period for the public to register opinions on proposed regulatory changes. But Zinke offered the public only 15 days to comment on the Bears Ears designation. This short period was especially onerous for Native Americans in the area, many of whom live in remote areas without reliable access to broadband internet.

"Just the way it was designed was to limit the participation of the tribes that were pushing for Bears Ears to begin with," Weiss said.

Hartinger pointed out that the Obama administration put years of work into this, first by permitting Utah Republicans to craft a congressional bill and then in working with the public to determine the size and scope of protections for Bears Ears.

"It’s alarming to see a process used that short-circuits the years of effort that went into that," he said.

Zinke's efforts to keep public voices out of the process have largely failed, however. An analysis by the Center for Western Priorities found that about 90,000 people managed to get comments onto the official federal website, while outside interest groups have collected 685,000 more comments during this 15-day period. A random sampling of the official comments found that 97 percent were supportive of national monuments in general, and half of those mentioned Bears Ears specifically.

Concerning big-money corporate interests, the situation is a bit more complex. There are definitely mining and oil companies that want to take a crack at Bears Ears, but also a huge business community in Utah relies on the tourist dollars brought in by national monuments and other protected lands. Protests at the Salt Lake airport when Zinke did his four-day tour of the state featured many business leaders who felt he was unwilling to listen to the economic argument in favor of national monuments. At any rate, there's enough economic pressure on the pro-parks side to make it unlikely that the anti-Bears Ears sentiment is primarily about economics.

Zinke's indifference to citizens was even more on display during his supposed "listening tour." Cassandra Begay, a Navajo woman representing the group Peaceful Advocates for Native Dialogue and Organizing Support, followed Zinke around during his visit and repeatedly demanded to know why he wouldn't meet with tribal leaders. He responded by shaking his finger in her face and scolding her to "be nice."

His behavior leaves conservationists with little doubt that the Trump administration is moving swiftly to undermine Obama's legacy by rescinding or drastically revising the Bears Ears monument designation.

Weiss pointed out that a similar fight, fueled by blind hatred of Obama, is going on in Maine. The founder of Burt's Bees donated 87,500 acres to the federal government, and Obama designated it the Katahdin Woods and Waters National Monument. But the Trumpian governor of Maine, Republican Paul LePage, is so angry about the monument's existence that he has refused to let the state post road signs telling people where it is. The Katahdin Woods monument is also included in Trump's executive order to review such designations.

The Katahdin Woods were private lands given directly to the federal government, so there can be no legitimate conservative ideological principle threatened by the designation. Lucas St. Clair of the Burt's Bees family called LePage's decision "spiteful," and it's hard to disagree. The Katahdin Woods are part of Obama's legacy. Since Gov. LePage hates Obama, he also hates Katahdin Woods.

This childish, irrational behavior about national monuments on the part of far-right and Trumpian Republicans might not initially seem related to Trump's choice to pull out of the Paris climate agreement. In fact, it may be the key to understanding what's motivating a choice that has deemed foolish and shortsighted not just by liberals but the dwindling number of rational conservatives. What the national monument story tells us is that Trump and his acolytes are primarily motivated by a desire to uproot Obama's legacy however and wherever they can, and can't be bothered to care about the disastrous consequences of doing so. It's the legacy of a destructive loathing being spewed all over the planet by people who have been consuming hate for so long they have nothing else to offer.