Lawyer Lisa Bloom was unable to keep a troll from, quite literally, stealing the spotlight 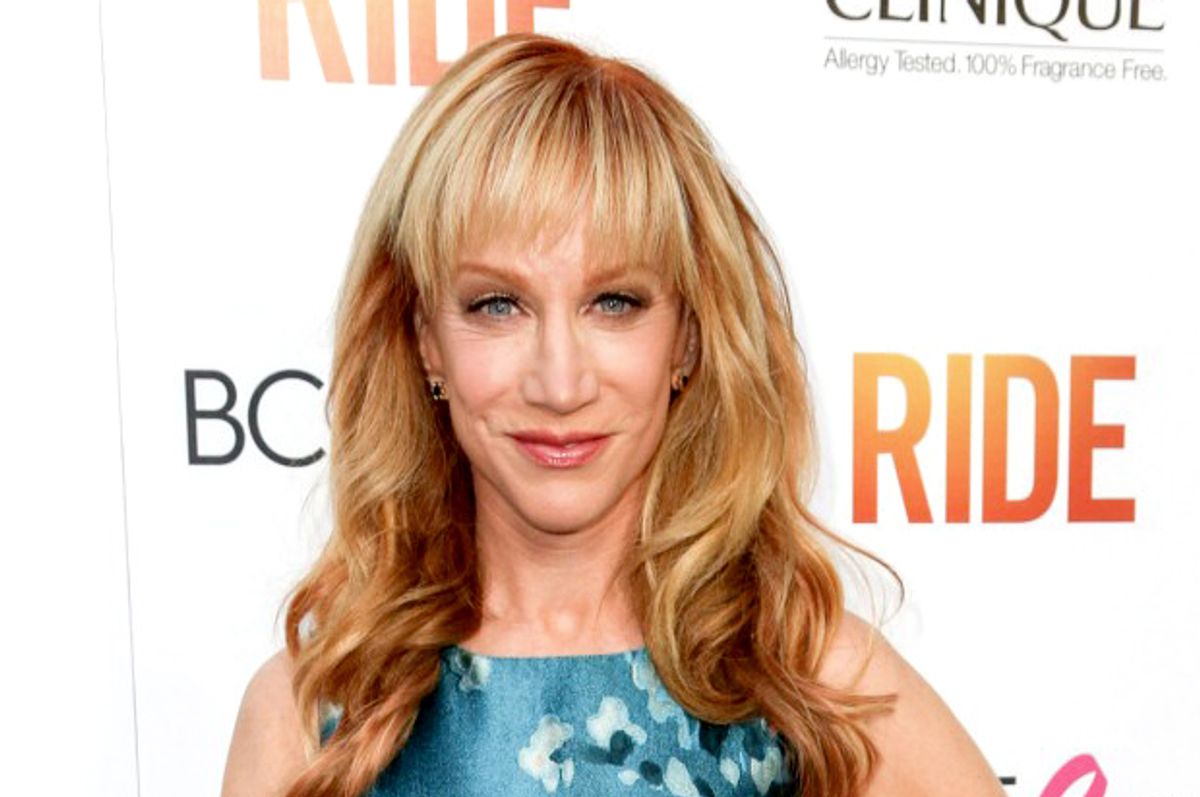 Kathy Griffin's press conference became, like her controversial picture of Donald Trump itself, a provocative, memorable and somewhat unhinged work of performance art.

Veering wildly from clever jokes and somewhat off-track political pronouncements to genuine apologies, Griffin and her lawyer Lisa Bloom went on the offensive with teeth bared.

The two placed the comedian's shocking comic picture — one that showed her holding a facsimile of President Donald Trump's bloodied severed head — within the context of Griffin's left-wing political stances and career of boundary-pushing comedy. While emphasizing that they were standing by her apology, they also framed — perhaps quite rightly — the backlash against Griffin as being symptomatic of misogyny and authoritarian repression that (from their vantage point) is far more troubling than anything Griffin herself has said or done.

After citing the comedian's longstanding support for LGBT rights, feminism, veterans' rights and other causes, Bloom explained that Griffin's motive in creating the picture was to reference Trump's misogynistic comments and ask, "What would it look like if his own insults were turned on him?"

Bloom specifically cited Trump's misogynistic comments about former Fox News host Megyn Kelly, when he insinuated that she asked tough questions because she was menstruating, as well as his infamous boasting that he could grab women "by the pussy."

Griffin's image was a "parody of Trump's own sexist remarks taken to an extreme, absurdist visual," according to Bloom. The lawyer then pointed out the number of male artists who have made threatening comments against presidents without nearly as much controversy. Ted Nugent, who had made death threats against President Barack Obama but was stilled invited by Trump to the White House, received particular mention.

Bloom also accused Trump and his family of targeting Griffin for criticism in the hope of creating a "chilling effect" against artists who offend them.

Then it was Griffin's turn at the microphone. By her own admission, this was her first press conference, and the rambling, joke-strewn messages that followed underscored that fact.

"I'm not afraid of Donald Trump. He's a bully," Griffin bluntly stated. She stood by her apology and added that if she could redo the picture, she would have used "a blowup doll and no ketchup." That said, she added that no previous presidents who she had mocked had attacked her like Trump and his family had done. Griffin also claimed that the Secret Service is investigating her as a result of her joke.

This, Griffin argues, brings up a much bigger problem than her particular brand of shock comedy: Namely, the fact that Trump and his family are trying to ruin her career for criticizing them.

"The Donald, it's me the Kathy," Griffin said directly to the camera, adding that one time when she made that joke to him in person, "it went right over his nest" (i.e., his allegedly fake hair). She then pleaded with Trump to realize that, although she's an "obnoxious comedian," she doesn't deserve the death threats or attempts at career ruination that are being directed against her for her joke.

Griffin also argued persuasively that she is being treated differently because of her gender, claiming that she had endured such treatment throughout her career.

She scoffed at the notion that anyone could believe a 56-year-old comedian, "110 pounds when wet," could pose a legitimate physical threat to the president, and as such argued that attempts to ruin her career and leave her "broken" crossed a much bigger line than any joke could have done.

Between tears and mentions of dick jokes, both Griffin and Bloom attempted to frame the ongoing criticism of her image as a conspiracy launched by aged white men in high seats of power — not a genuine public reaction — and censorship enacted by an authoritarian regime. While certainly some attacks on Griffin have veered into unacceptable character assassination and death threats, none of the available facts bear out the comedian's analysis of the situation.

After Griffin and Bloom left the podium, a middle-aged white male troll walked up to the microphone with a photoshopped picture of Griffin holding Bloom's severed head. While Griffin's jokes garnered laughs from the audience, the man's angry attempt at humor was met with awkward shuffling. If he had wanted to serve as an embodiment of Griffin's point about white male entitlement, he succeeded.

Then again, if Bloom wanted to control Griffin's message and steer the conversation away from abuse, she failed. Quite literally, the trolls took the mic here.

It is perhaps ironic that Griffin claims that she is being bullied by Trump. In the past, she has discussed being bullied for her physical appearance as a child and struggling with bulimia, according to a report by The Washington Post. At one point, after comedian Jay Leno made a disparaging joke about her appearance, Griffin cried and later told Leno that she thought his joke was "below the belt" and would not have been directed against a male comedian.

This didn't stop Griffin from making fat-shaming jokes about Bristol Palin in 2010, however.

Prior to her press conference, fellow comedian Jim Carrey said during the premiere of his Showtime comedy "I'm Dying Up Here" that he felt Griffin should "hold up a severed leg as well," according to a report by The Guardian. The rubber-faced showman also told "Entertainment Tonight" that "it is the job of a comedian to cross the line at all times, because that line is not real. We’re the last line of defense. And really, the comedians are the last voice of truth in this whole thing."

Carrey then elaborated on a dream in which he nearly envisioned himself attacking Trump with a golf club.

Not surprisingly, Twitter was sharply polarized in its response to the Griffin-Bloom presser.