Open warfare breaks out among conservatives: March in lockstep behind Trump or show some infinitesimal spine?

Right-wing "thought leaders" face a quandary: Follow "our general" with no questions or admit he's a disaster? 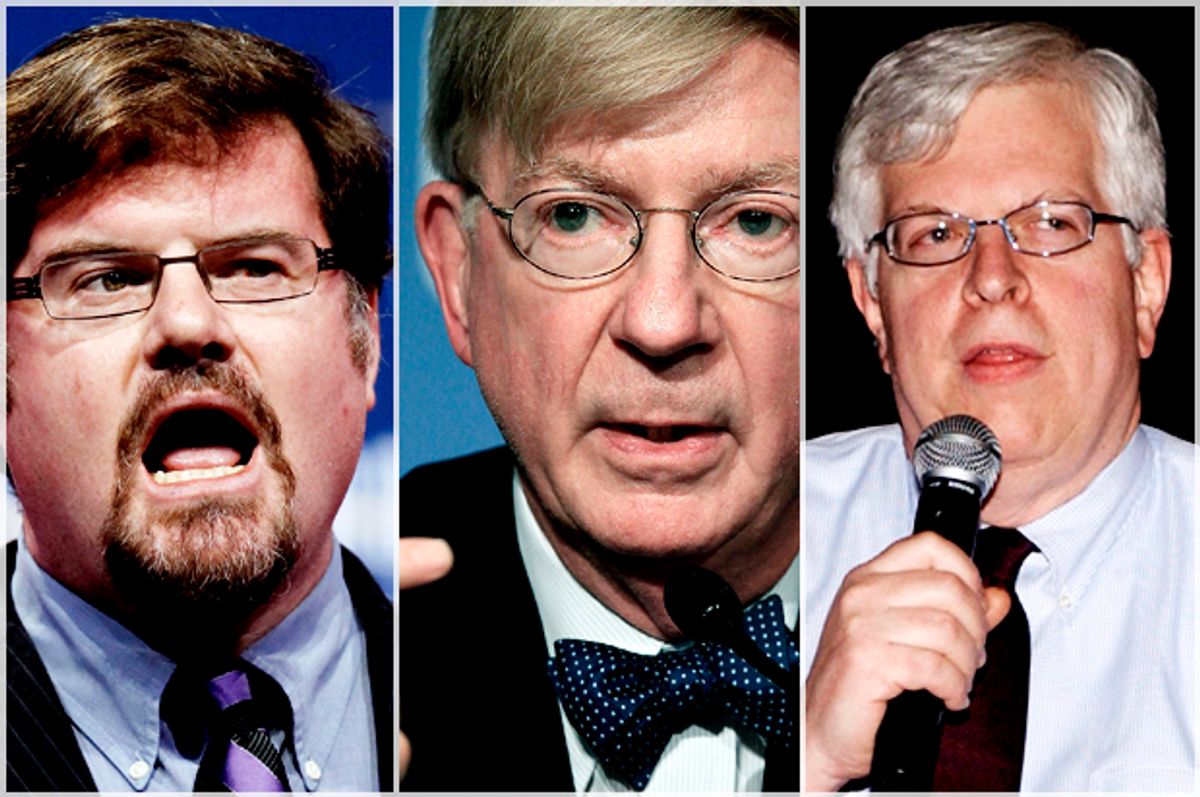 Generally speaking after an election loss the Democratic Party goes into a metaphorical circular firing squad and everybody simultaneously pulls their triggers. In Beltway parlance this is known as "Democrats in disarray" and the pundits spend many hours gleefully covering the tears and recriminations as the party tears itself apart.

This postelection season has not disappointed. But all in all, it's actually been a civil affair in comparison with previous years. The congressional caucuses are united in opposition to Trump and the Republicans and all signs point to a strong turnout in the midterms in 2018. Despite plenty of squabbling on social media, the usual internecine battles have been relatively subdued.

What is more interesting is that the Republican Party, which has everything — control of Congress, the courts, the White House and a large majority of statehouses all over the country — seems to be coming apart at the seams. This is, to say the least, unusual. But then it's also not usual that winning political parties elect intellectually inadequate, inexperienced, incompetent, narcissistic celebrities to lead them. It is causing more than a little distress at a time when the party should be in position to enact a sweeping agenda.

This doesn't mean that party officials aren't enabling the president. As I wrote in this earlier piece, the GOP leadership has a lot to answer for. Their cowardice and hypocrisy will be remembered for the ages. But even as leading Republicans continue to excuse President Donald Trump's monumental unfitness, they are finding it almost impossible to coalesce into anything resembling a successful working majority, despite a remarkable degree of ideological coherence.

It remains to be seen whether the leadership under House Speaker Paul Ryan and Senate Majority Leader Mitch McConnell can corral their caucuses and place some major legislation onto Donald Trump's desk. We'll know they're in serious trouble if they fail to pass their Holy Grail, the monstrous tax cuts for the wealthy. One suspects they will find a way to get that one done, if almost nothing else.

But the more interesting argument is happening among the thought leaders in the party. This past week all-out war broke out between the NeverTrump faction and the Trump loyalists. Here's one skirmish that took place on CNN on Wednesday night between two conservatives, Matt Lewis of the Daily Beast and Jay Sekulow of the Center for Law and American Justice:

Sekulow was spouting the White House party line, while Lewis was standing up for Jim Comey, the Republican former U.S. attorney and FBI director. It was all in the family. And nothing is as vicious as a family fight.

There was another tempestuous row among conservatives this week, one that exposed the fundamental nature of the disagreement. Last Tuesday talk-show host Dennis Prager published an essay in National Review excoriating conservatives for failing to fall in line behind President Trump. He wrote that these anti-Trumpers didn't understand that the nation is involved in an existential battle with liberalism. He explained as follows:

On the other hand, I, and other conservative Trump supporters, do. That is why, after vigorously opposing Trump’s candidacy during the Republican primaries, I vigorously supported him once he won the nomination. I believed then, as I do now, that America was doomed if a Democrat had been elected president.

He begged them to join the war effort, saying this:

They can accept an imperfect reality and acknowledge that we are in a civil war, and that Trump, with all his flaws, is our general. If this general is going to win, he needs the best fighters. But too many of them, some of the best minds of the conservative movement, are AWOL. I beg them: Please report for duty.

The idea that Democratic nominee Hillary Clinton presented an existential threat that had to be stopped by any means necessary is not original. I've written previously about the influential essay called "The Flight 93 Election" published during the campaign season by a writer calling himself Publius Decius Mus that made this same case. (His real name is Michael Anton, and he's now a White House national security adviser.) The essay argued that conservatives were in a similar situation to what confronted the passengers who stormed the cockpit aboard Flight 93 on Sept. 11, 2001, willing to risk taking the plane down rather than letting it head toward Washington and crash into the Capitol.

Anton's metaphor suggested that it was better to empower Trump to crash the ship of state than allow Hillary Clinton to pilot it because her victory would result in “vindictive persecution against resistance and dissent.” His cri de coeur was "I want my party to live. I want my country to live. I want my people to live." By "my people" he explicitly meant white conservatives.

Prager's thesis is a little bit more optimistic. He believes that liberalism can be defeated, if only the right will stick together. His view is nicely distilled by the writer Kurt Schlichter who tweeted this in response:

But Prager got plenty of blowback from fellow conservatives as well. It seems that some of his compatriots don't see liberals as an enemy so pernicious that they must be vanquished. The New York Times' Ross Douthat answered the essay with a series of tweets:

During the campaign pro-Trumpers insisted that never-Trumpers were acquiescent to a Hillary presidency. In a sense, we were. But now a Hillary presidency is off the table. . . . Now we're just being asked to pretend that Trump is a good president when he's obviously an incompetent one. No thanks . . . it just can't be the Flight 93 election every minute of every day of every year of his presidential term.

He doesn't seem to buy the notion that the "Hillary presidency" was just a momentary manifestation of the toxic liberalism that Prager, Anton and Schlicter believe must be eliminated from American life altogether, thus requiring conservatives to support anything and everything Donald Trump might do.

National Review anti-Trump writers Jonah Goldberg, David French, Erick Erickson and Dan McLaughlin all responded to Prager's article with various degrees of indignation. Matt Lewis of The Daily Beast, in the aforementioned outburst on CNN, referenced a number of other instances of blind Trump worship, including White House spokeswoman Hope Hicks' recent paean to Trump that sounds more like a propaganda statement from North Korea about its Dear Leader. Lewis made an important observation:

Trump supporters, it seems to me, are more disposed to prize authoritarian traits like loyalty and hierarchy. For these Trump apologists, the analogies never end. He is our general. Sometimes he’s our daddy. Sometimes he’s our CEO. Whether it’s paternalistic, militaristic, or capitalistic, there are numerous ways to be subservient to him. Pick your favorite!