Technosplit: The bifurcation of humanity

Will social inequality soon be programmed into our DNA? 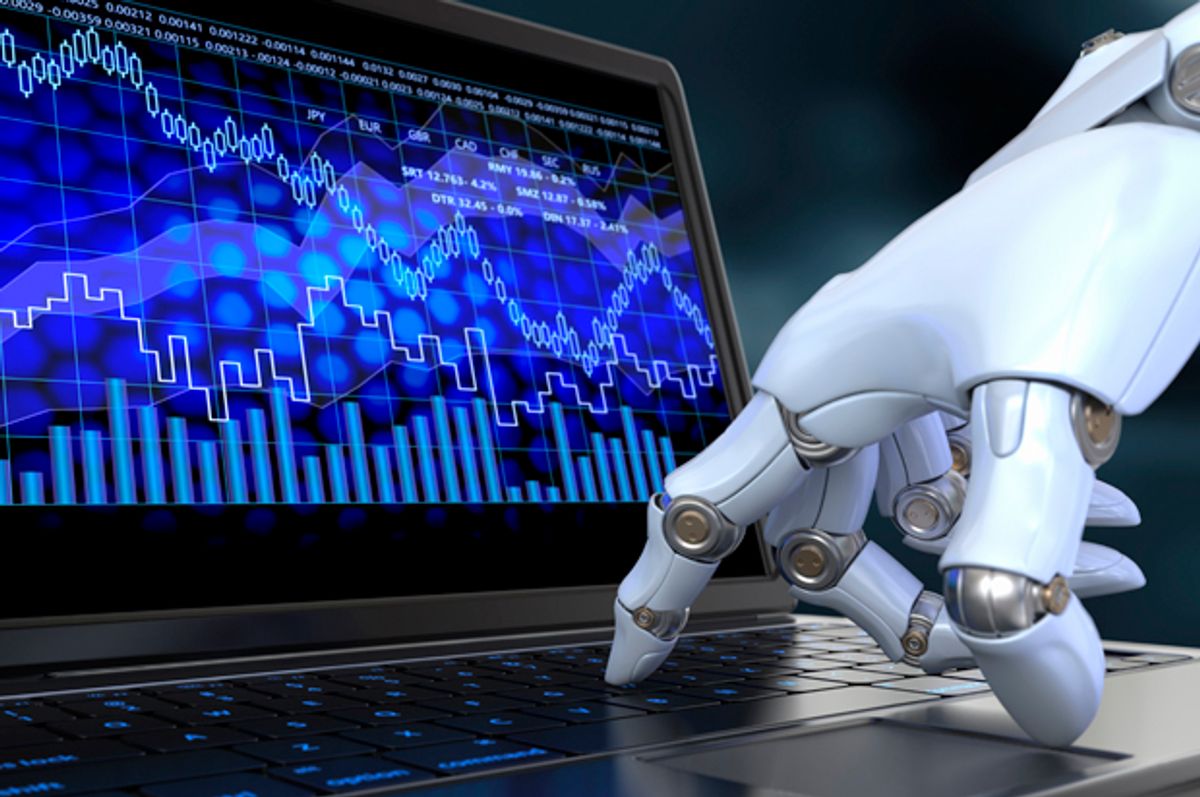 The chasm between rich and poor in the world has become so extreme it is frequently difficult to grasp. The eight richest men in the world now own as much as the entire bottom half of the world’s population. The wealthy OECD countries, representing less than 20% of the global population, consume 86% of the world’s goods and services, while the poorest 20% consume only 1.3%. These numbers translate into the shameful reality that a billion people go hungry every day and another billion remain chronically malnourished.

Nevertheless, you won’t hear much talk about these numbers in techno-optimist circles that breathlessly discuss the tantalizing possibilities of human enhancement. When futurists blithely envision the possibilities for human enhancement, they ignore the fact that billions of people are barely surviving. and will have no realistic chance of gaining access to these advances. In fact, spend enough time on these topics and you’re liable to forget that the majority of human beings are struggling to make ends meet and barely able to think about the next month, never mind decades ahead.

In certain affluent echelons of the developed world, the technological promise of an enhanced human lifestyle exerts a powerful attraction. Leading Silicon Valley companies are funding startups intent on discovering how to disrupt the aging process and allow people to achieve something close to immortality. Breakthroughs in neural implant technology raise the possibility of people being able to communicate with their computer — and each other — by thought alone in the near future.

Meanwhile, advances in genetic engineering offer the possibility that, within a few decades, the gulf between rich and poor might extend beyond economics and technology to become part of our biological makeup. Scientists are working on identifying sets of genes that correlate with better intelligence, physical fitness, health, and longevity. Once they do so, affluent parents will not forego the advantages that genetic engineering could offer their offspring. At first, new generations will appear much like the older ones, only somewhat more intelligent, healthier, and longer lived. Before too long, however, we will see a new default perception of what constitutes a human being in the affluent world.

Gregory Stock, an advocate of human genetic engineering, predicts we will soon see humans as divergent as “poodles and Great Danes.” He’s not alone in this view. Physicist Freeman Dyson has warned that engineering the human germline “could cause a splitting of humanity into hereditary castes,” while biologist Lee Silver sees what he calls “GenRich” and “naturals” ultimately splitting into “entirely separate species, with no ability to cross-breed, and with as much romantic interest in each other as a current human would have for a chimpanzee.”

Eventually, the affluent and the dispossessed will become — effectively, if not literally — two separate species. One species, genetically and technologically enhanced, exploring entirely new ways of being human; the other species, genetically akin to us, left behind to struggle in a world reeling from resource exploitation and environmental degradation. It’s a future scenario I refer to as Technosplit.

Based on the current rate of converging technical advances, it’s reasonable to expect, by 2050, a young affluent urban couple — let’s call them Cameron and Jude — to be planning their genetically optimized offspring while communicating their thoughts and feelings to each other in an enhanced form using neural implants.

Cameron and Jude will be increasingly segregated from the fate of billions of others suffering the effects of climate change and resource scarcity. They are fortunate to be living in London, one of the affluent cities that by then, will have spent many billions of dollars to protect itself against the massive tidal surges that will be part of the new normal. As they enjoy their virtual reality tours of the few carefully engineered eco-zones still maintained as “wilderness parks,” what kind of world will the majority of humanity be experiencing on the other side of the Technosplit divide?

In future decades, as the affluent minority enjoy their neurally interconnected, genetically enhanced lives, cities in much of Africa and Southeast Asia, beleaguered by political instability, massive poverty and inadequate infrastructure, are likely to be reeling from the ravages of climate change. Reduction in river flows and falling groundwater tables will lead to widespread shortages of potable water. Flooding and landslides will disrupt electricity, sanitation and transportation systems, leading to rampant infectious disease.

Meanwhile, even as these cities strain to the breaking point, millions more refugees will be streaming in from the rural hinterland where the effects of climate change will be even more devastating. Wealthier residents will flee these urban disaster zones for safer abodes, either in the developed world or newly planned, segregated cities insulating them from the suffering of their compatriots, leaving the largest urban population centers without the capital reserves to fortify their structures against the threatening onslaught of even more severe climate disruption.

Along with the human catastrophe of failed states and the misery of billions in overwhelmed coastal megacities, the nonhuman world is heading inexorably to its own form of collapse. At current rates of destruction, natural ecosystems are likely to be reduced to islands of conservation habitats surrounded by vast agribusiness plantations and urban sprawl. Tropical rainforests will only survive as degraded, shrinking remnants in national parks.

Cameron and Jude might not, however, consider this situation as gravely as we do, given their reduced expectation of the natural world and their ability to experience vastly enhanced virtual reality immersions in wildlife reservations, enabling them to feel closer to nature in some ways than many of today’s urban residents. Meanwhile, the affluent world will be doing its utmost to maintain an iron grip on access to vital global resources through its stranglehold on the world’s economic and military systems.

A betrayal of human values

At the current rate of increase in global economic disparity and technological innovation, this is what we must expect for humanity’s future. But is it what people desire, even in the affluent world? Many techno-optimists, who argue that humanity’s defining feature is the ability to reach beyond the limitations of our biology, believe so and celebrate the possibility of humanity’s ultimate triumph: the unfettered progress of technology’s conquest of nature.

But there’s another view of humanity that permeates the modern world, one based on the “recognition of the inherent dignity and of the equal and inalienable rights of all members of the human family.” These words, from the U.N.’s Universal Declaration of Human Rights, represent a different kind of historical progress—the progress of humanity’s moral scope, which has expanded beyond tribal groupings to encompass the entire human race. In this view, spelled out by the Declaration in 1948, “all human beings are born free and equal in dignity and rights. They are endowed with reason and conscience and should act towards one another in a spirit of brotherhood.” According to this view, “everyone is entitled to a social and international order in which the rights and freedoms set forth in this Declaration can be fully realized.”

From this viewpoint, the Technosplit scenario would be a fundamental betrayal of human values. It would be equivalent to the rich minority building a luxury lifeboat and deserting a rapidly sinking ship that’s taking down those who can’t afford the entry ticket.

On the other hand, might Cameron and Jude be more profoundly disturbed by the convulsions of their world than an equivalent couple in today’s society? Could their enhanced connection with what’s left of the natural world cause them to treasure it more keenly? Might the impending devastation from climate change drive them and their peers to demand a radical redirection in the world’s trajectory? Could their potentially enhanced neural ability to connect with the suffering of the impoverished billions cause them to press for a different world economic order that honors the intrinsic rights of each human being?

The attitude Cameron and Jude — and millions of their peers — take to their world will fundamentally affect the future trajectory the human race. And this attitude will depend ultimately on their core values, which will emerge to a large extent from ideas developed by our generation.

A scenario where humanity remains resilient requires something deeper than even the most compelling economic and technological solutions to our current crises, such as a global price on carbon and massive investment in green energy. These are undoubtedly necessary to avert disaster, but even if they’re fully effective, they wouldn’t be sufficient to avoid the Technosplit scenario. That would require a more fundamental shift in the underlying values that drive our daily decisions, along with structural changes to the global economic system that is causing the inequalities wrenching humanity apart and leading us step-by-step towards Technosplit.

When a system is stretched to breaking point, something has to give. In the Technosplit scenario, our economic model remains resilient, but our shared humanity is transformed beyond recognition. In a scenario where our shared humanity remains intact, the economic system driving our current trajectory would need to be transformed, along with its underlying values: the pursuit of never-ending material growth and the glorification of humanity’s conquest of nature. In its place, we need to nurture a new set of values, ones that emphasize growing the quality of life rather than material possessions, a profound sense of our shared humanity, and a commitment to the flourishing of the natural world.

As we progress further into this century, with its combination of glorious possibilities and existential threats, it is becoming clear that our generation, along with the next, is engaged in nothing less than a struggle over the future of what it means to be human.

Jeremy Lent is an author and speaker whose work investigates the underlying causes of our civilization’s existential crisis, and explores pathways toward a life-affirming future. His recently published book is The Web of Meaning: Integrating Science and Traditional Wisdom to Find Our Place in the Universe. Find his website at jeremylent.com.