"There's a weird sexual energy": What's with the woman and her gay male friend in "#Adulting" and "Notions"? 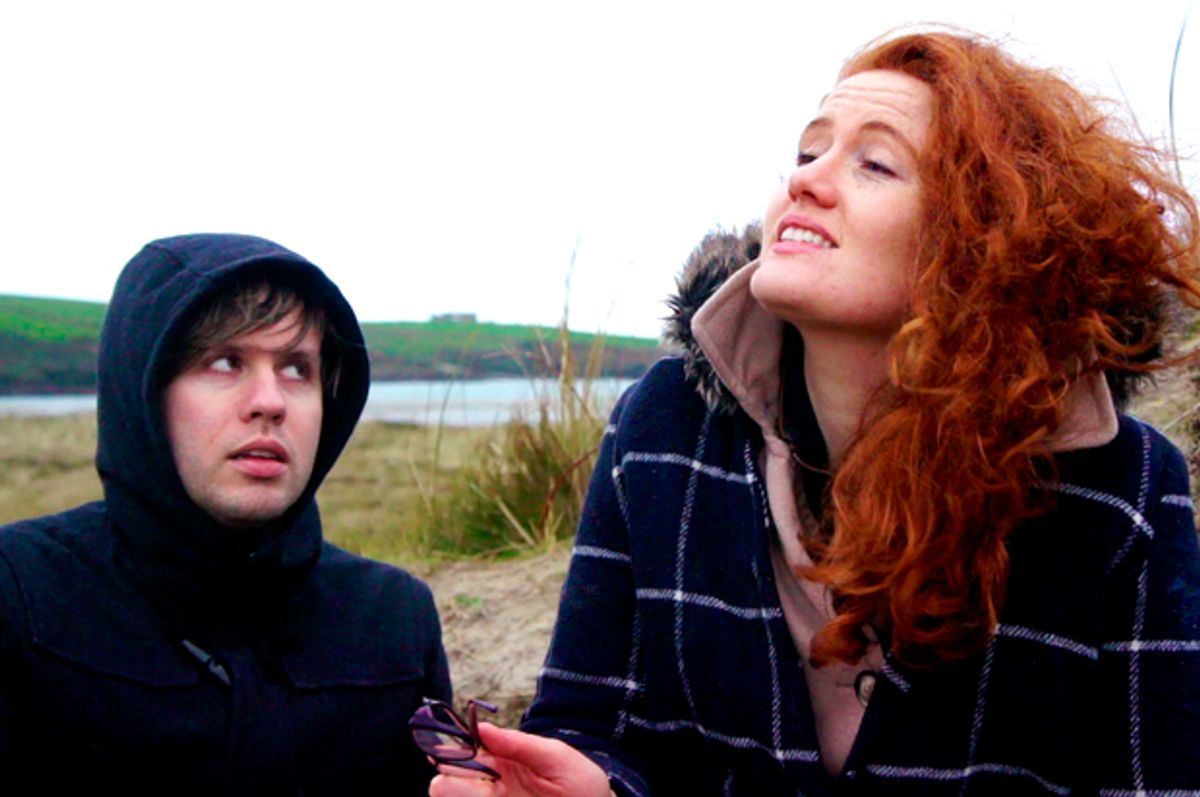 Two recent webseries, “#Adulting,” written by stars Ben Baur and Thandi Tolmay, and “Notions” by Eoghan McQuinn and Valerie Ní Loinsigh, feature gay male millennials and their strong female besties. Both of these shows operate on the dynamic that a codependent gay male/female relationship, while supportive to a degree, can also be toxic.

In the six episodes of “#Adulting,” Max (Baur) is repeatedly being called to help Faye (Tolmay) out of a bad date, or with a tricky work situation, or for comfort when she runs into her ex. Moreover, Max’s efforts to attend a yoga class (because the instructor is hot and flirty) or meet with a job prospect are thwarted by Faye. How these characters grapple with being broke, unemployed and unable or unwilling to grow up forms the show’s humor.

For the Irish series “Notions,” Val (Ní Loinsigh) returns to Dublin to reconnect with Eoghan (McQuinn) and eventually move in with him and his partner Marlon (Marlon Simeon). Unemployed actors who spend their days mostly eating, sleeping and scrolling, Val needles Eoghan about his lack of opportunity, despite having few options of her own. It’s very much a relationship based on Val one-upping Eoghan, who may be the only person lower than her.

Baur and McQuinn chatted separately with Salon about their amusing webseries.

Ben, what do you think is threatening to straight guys about the gay male/straight female dynamic?

That entire [pilot] episode, where Faye says her ex was threatened by Max, was based on actual events. Thandi had a boyfriend who said that if I were straight, I would be with her. He was upset that we were close, and it did drive a wedge into our friendship.

For us writing it, the codependence had less to do with a gay male and straight woman dynamic and more to do with two kids looking down he barrel of 30 and not being where they thought they would be. We felt promised our lives would be like “Will & Grace” and “Friends.” We let each other off the hook: You don’t have to grow up because I’m not going to grow up either. It’s safer, but it’s mutual sabotage.

I think that for Faye, she can get the guy’s point of view but have it be entirely safe. For Max, other [friendships with] gay guys would be competition. For a lot of gay guys, they choose their friends based on attraction. With Faye, that’s not a thing. They can bitch and commiserate and talk about stupid boys with zero competition.

As a gay man, there’s something nice and normal about fostering these relationships with women. I’ve been re-reading “The Velvet Rage” and it explains how so many things about our personalities as gay men are derived from realizing how different we are. There are things we do to hide this “otherness” and be “normal.” Maybe that’s part of it; in Max and Faye’s case, they hold on to their relationship. There is a weird sexual energy. They are both lonely, but their relationship makes him feel normal.

Max seems to be continually getting calls from Faye for support. Why is the balance between them that she’s more needy? She’s never really there for him.

One of the things we wanted to explore, especially in the last episode, was we needed one of them to function without the other a little bit, so you could see one of them trying to grow up and be pulled back. She was sucking Max in. He starts to detach, but she pulls him back in again. But what other option does he have?

What do you think is toxic about Max and Faye’s relationship?

It’s not always toxic, but I think it comes from being terrified of having to grow up. I’m going through this in real life. My friends are having babies and buying houses. I find $4 in my jeans and buy a coffee at Starbucks. I’m celebrating sad little wins. Max and Faye get drunk and go on Facebook and talk shit about people making it for themselves because that makes them feel better.

They are stuck in this codependent relationship and you end up needing each other, and sacrificing real life — growing and moving on from the shitty times you bonded over — and you get in a cycle of making bad choices and commiserating over it. Since you don’t want anything from the other person, other than for them to be there for you, you let each other off the hook. You do not have to answer to the bad choices you made; it’s OK. There’s something about that that is really interesting, especially when one wants to pull away from that endless cycle and the other one doesn’t let them.

Can you talk about how Max and Faye’s codependence keeps each other down?

I have always been an inherently lazy person. I felt I deserved the things I wanted and I never did the work until I was 28. Then I thought: My life is nowhere near where I thought it would be. But of course it’s not. I didn’t put my work into anything! [Then] I was 29, and I said I have a year to make it happen. This sense of entitlement held me back personally. I was coddled growing up. To have to grow up and do things like buying a car or doing taxes, it’s so daunting.

Nowadays you have people making a living taking pics for Instagram. It’s a hell of our own creation, but it’s easy to see why that entitlement exists. People who don’t contribute anything to the world are famous.

“#Adulting” is showing those feelings of inadequacy that we have. Maybe it would help others who feel the same about bad dates, or finding a job, etc. We wanted people to watch and say, “I’ve been through that too.” The world can be a lonely place. If you can identify with Max and Faye, maybe you can feel less alone.

Eoghan, can you talk about the premise of “Notions,” of characters being so defeated so early in life?

Eoghan is depressed at the start of the series. Val’s aware of that. He’s finding it hard to hide his depression from Val because she can read him. I wanted to write something funny about depression. When you have nothing to do and are unemployed, what else are you going to do but scroll all day and compare yourself to everyone else on Facebook?

What was the idea behind the detrimental dynamic between Valerie and Eoghan?

Throughout the series, you see just how difficult Val can make Eoghan’s life with Marlon. Eoghan is aware of how toxic it is, but chooses to pursue the relationship because of nostalgia. In real life, Val would contradict you for the sake of it, just to challenge you. Val has her flaws, and you see the toll that takes on Eoghan’s personal life.

Val is the crazy character to Eoghan’s “straight man.” It may be a little unclear in the pilot, but Val is a lesbian. He talks about how superficial the gay scene is. Val is playing up her masculinity by not having an orientation. Val is a little more asexual than Eoghan.

The straight woman and gay man dynamic has been successfully portrayed in pop culture. It’s about women and men feeling safe together. There isn’t a danger of attraction, or an affair. You can be friends without anyone getting jealous.

Valerie bulldozes her way through much of the series, uncaring of other people or their feelings. Why is he so devoted to her?

It’s about modern gay man adoring a strong woman. We all have our divas and icons and if we get to be close to our icons, all the better. Usually they are on a movie or TV screen, or singing a pop song. But if you equate this with your college friend that everyone thought was your girlfriend, and you are willing to look past their flaws and bad behavior, that makes them look more fabulous.

Can you talk about the characters’ delusions of grandeur?

The whole title of the show is using the Irish meaning of the word “Notions,” which is having disproportionate self-esteem. She has “notions” that she’s an actress. What’s funny about what we’re writing is that we can relate to this because it’s the danger of feeling above your station, or feeling you deserve to be.

The show is light and funny, and speaking to our generation. We’re deluded that we're in our mid-20s and did a degree, and worked hard in retail for a year, and now we’ve had enough of that. But there’s no cavalry coming, and no one will give you the career you “deserve.”

You’re creating art about the career you think you should have!

We comment upon art like navel-gazing, self-indulgent theater by our peers, saying “Who would want to watch that shit?” — but that’s exactly what we’re making! It’s criticizing the pitfalls of our own experience.