What exactly is it? Crispin Glover’s surreal, cinematic vision of the big, bad world 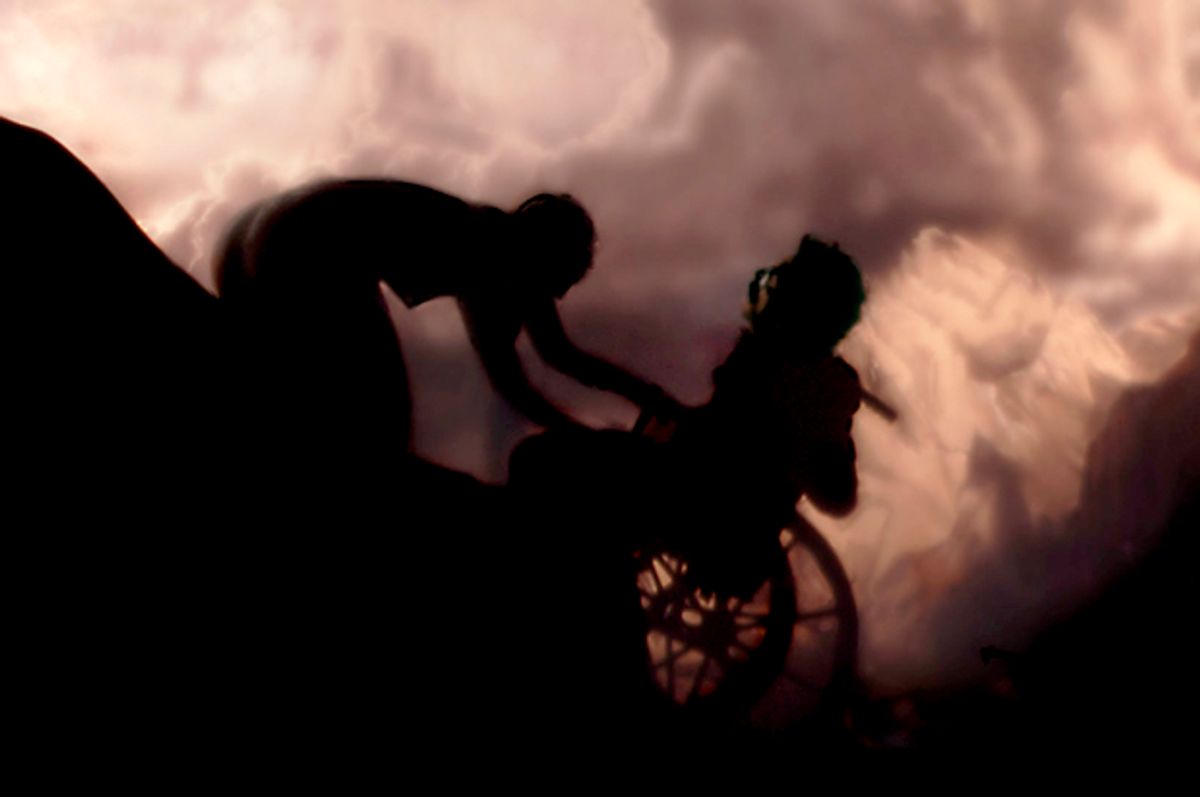 April Hoglund and Steven C. Stewart in "It is fine! EVERYTHING IS FINE." (David Brothers)
--

Crispin Glover’s mind is a trip without a suitcase. Talking to him about his work and the current state of the world is a ceremonial experience that subverts all presupposed expectations, the first being, “I can’t believe I’m having this conversation with George McFly.” The second may be, “I know, Feck. Women are evil, you had to kill her.” The third is “Beowulf.” But I’ll never tell him.

Nostalgia for epic poems and movies from my high school years aside, this singular actor, auteur and author makes books and films that are at once thought-provoking, visually arresting and surreal. His main topic, the pervasive nature of corporate control that has held our nation since the 1980s, a decade that gave us “Back to the Future” but cast aspersions on questioning the status quo, a skill that Glover holds near and dear and believes essential to the nature of art.

Though his cinematic influences are myriad and mighty — Fassbinder, Buñuel, Herzog and David Lynch —  his passion, filming the supposedly unfilmable/invisible also recalls Tod Browning and that infamous guess-who’s-coming-to-dinner scene in “Freaks” when suddenly the supposed beauty becomes the outcast and the audience questions the nature of normal.

While both Browning and Glover play with reversal of expectations and discomfiture to elicit some form of metamorphosis, for Glover it is all about subversion and questioning. For one, he only screens his films while he is present as part of an interactive, performative evening reminiscent of Vaudeville. Indeed, Glover constructs entire marathon events around his films so that the audience can engage in talkbacks about what they have just experienced: a one-hour reading of one of his “profusely illustrated” books, “Round My House,” “Concrete Inspection” and “Rat Catching” to name a few. These readings are accompanied by projected images from the books (Glover’s sketches and eerie illustrations, otherwise known as “Crispin Hellion Glover’s Big Slide Show Parts 1 & 2”), followed by one of two possible feature films from his trilogy and then a question-and-answer period that can last for more than an hour. In other words, the entire evening clocks in at four to five hours of Crispin, baby.

For Browning, the move toward everything ew was career suicide. At the time, no one wanted to see a popcorn movie and feel shitty about being pretty or being able to walk. For Glover, this form of investigation continues to be an artistic imperative. Entirely self-funded — i.e., by his more commercial films, such as “Charlie’s Angels” — his two films “What Is It?” and “It Is Fine! Everything Is Fine” form two parts of a trilogy that have been 20-plus years in the making. Both films elicit a host of responses that run the gamut from awe to revulsion, all of which Glover values equally, as long as the audience engages actively with what they’ve just seen and experienced. A third film, “It is Mine” is on hold. He is currently producing and directing another film that will also feature his father, actor Bruce Glover (“Chinatown” and “Diamonds are Forever”).

“We’ve been raised with a generation of people that don’t question film,” Glover tells me over the phone from his sprawling chateau in the Czech Republic. “That’s why I tour with the film. People often think something’s wrong with me rather than the film.”

Glover started shooting “What Is It?” the first film of the trilogy, in 1996. The film began as a short, but when it became clear that it wasn’t viable for corporate financing, he decided to self-finance. The film is an amalgam of various surreal images that tell a story of a man’s search for snails. Like “American Gods,” the Starz series in which Glover currently plays Mr. World, “What Is It?” puts forth a “Dueling Demi-God Auteur” to dismantle every last taboo. Additionally, the cast is comprised almost entirely of actors who have Down syndrome (though the characters they are playing do not). There is even a white actor in blackface.

These choices, both provocative and, for many, racist, alarming and inappropriate, seem to suggest a way of thinking that goes back to Glover’s original point: reifying taboo subjects until they are no longer taboo. Rather than pushing boundaries — he eschews that phrase — Glover believes that the filmmaker’s task is to proceed into any arena (as long as it’s not illegal) and create art that makes the viewer “think beyond the frame.”

“I am very careful to make it quite clear that ‘What Is It?’ is not a film about Down syndrome but my psychological reaction to the corporate restraints that have happened in the last 30 or more years in filmmaking,” Glover says. “Specifically, anything that can possibly make an audience uncomfortable is necessarily excised or the film will not be corporately funded or distributed. This is damaging to the culture because it is the very moment when an audience member sits back in their chair, looks up at the screen and thinks to themselves, ‘Is this right what I am watching? Is this wrong what I am watching? Should I be here? Should the filmmaker have made this? What is it?’”

Valid questions, and ones that Glover believes the audience needs to answer as part of an ongoing dialogue that no longer seems to occur due to a variety of corporate ills and the fact that people generally pussyfoot around uncomfortable topics when they should necessarily confront them head on. The blame here isn’t placed only on Evil Conservatives, but also liberals and their censorship of free expression. Again, the point is discomfiture.

“Good art can be uncomfortable and disturbing,” Glover continues. “My films are to the left of liberalism. Because Surrealism with a capital S is a political movement. It goes into territories that liberals get very angry about. Liberals will say, ‘You can’t say it this way.’ But what’s truly liberating is Surrealism. It’s more liberal than liberalism.”

The second film of the trilogy, “It Is Fine! Everything Is Fine,” is a departure from the corporate-interest metaphor of “What Is It?” in that it delves into the mind of writer Steven Stewart, the star of the film. In real life, Stewart had such severe cerebral palsy that he was unable to speak or move. After his mother died, he was locked into a nursing home for 10 years where the staff horribly abused him and called him M.R. (mental retard). When Stewart finally left the nursing home, he wrote his screenplay in the style of a TV murder mystery movie-of-the-week, a very specific, melodramatic writing style with high highs and low lows. Glover read the screenplay in 1986, recognized the bare emotional turmoil reflected there, and knew he wanted to film it.

The film’s somewhat autobiographical story, about a man with severe cerebral palsy who fetishizes extremely hot women with long hair and then kills them, explicates the the notion that disabled people are “human, sexual and also can be horrible just like everyone else.” Part horror film and part psycho-sexual fantasy — the hot women understand everything Stewart says — “It is Fine! Everything Is Fine” also stars Fassbinder actor Margit Carstensen.

“It’s considered taboo for somebody from one race to play another race,” Glover reminds me. “But it’s still not considered taboo for a person to play another person with a disability. Of course, I see the reason for why you can’t play someone from another race because of all the horrible things that happened in the U.S. and what we did, but if you play someone with a disability and you don’t have a disability, you get an Oscar.”

When I question Glover about his films — the point of his work — he is somewhat vague on the answers, one of which is what about the exploitation of women in “It is Fine?”

“The movie is not a document, it’s a fantasy,” Glover says. As I ponder this, he adds, “The actresses are beautiful. Steve wrote it as a TV movie. On TV everyone is perfect looking.”

Again, that scene in “Freaks” comes to mind. Specifically, all the “freaks” chanting, “We accept her, we accept her. One of us, one of us. Gooba-gobble" at the beautiful and “normal” Cleopatra. That shift in perspective. Yes, the beautiful woman continues to be exploited, disfigured or die, which is an age-old sexist trope, but what is this ultimately saying? Women are salacious fuckdolls? Everything is okay in a revenge fantasy? There’s a scene toward the end of the movie “28 Days Later” when the two women are preparing to be gang-raped by soldiers in order to repopulate the world. Watching, you realize that it’s not the zombies who are the monsters, it’s the humans. In that leveling moment, rather than surrender, before you attack or run, you lift your head high and ask, “What is IT?”

Crispin Hellion Glover’s Big Slide Show Part 2 followed by “It Is Fine! Everything Is Fine," a Q&A and a book signing will be at the IFC on June 20.

Crispin Hellion Glover’s Big Slide Show Part 2 followed by “What Is It?," a Q&A and a book signing will be at the IFC on June 21.