Climate change as culture war: Trump's Paris pullout is a giant middle finger to the left 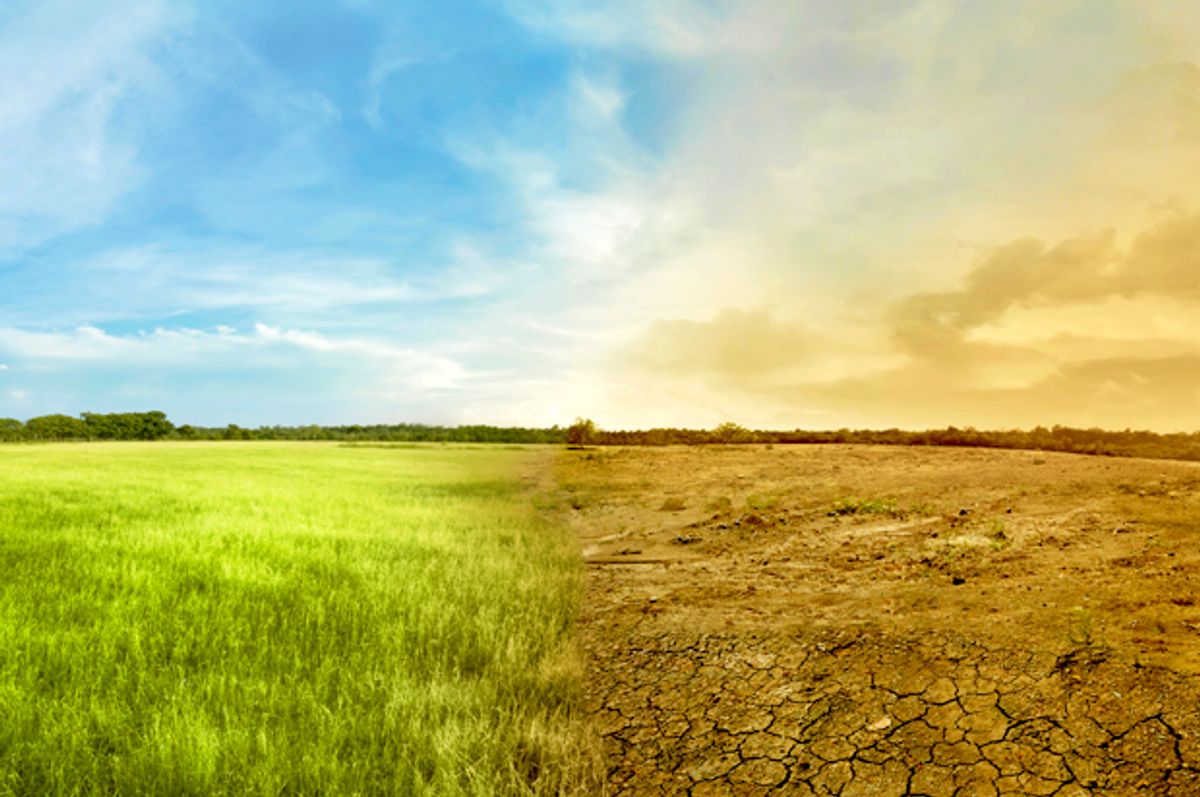 When President Donald Trump announced on Thursday, with great fanfare, that he is pulling the United States out of the Paris climate agreement, it was a stunning illustration not just of Trump's own ignorance and pettiness, but also of the widespread nastiness in the conservative movement about this issue. For American conservatives, climate change is not fundamentally understood as an environmental, economic or moral issue. Instead, it has become a symbolic front in the culture war that has metastasized in the past couple of decades, touching on every aspect of life, from how we eat to the kind of cars we drive.

"Tribalism has also entirely subsumed the US conservative movement," David Roberts at Vox wrote on Friday. "The intellectual core has all but rotted; what remains are older, rural and suburban white men and their wives, angry that their tribe is being demoted from its hegemonic position."

For liberals and frankly most other people around the world, including conservatives and business leaders, the issue of climate change is largely understood in pragmatic terms: Rising global temperatures caused by man-made pollution are going to lead to rising sea levels, droughts and other environmental hazards that will have devastating consequences for the economy and for life itself, as resources are depleted and the human population keeps growing. People who see it this way — which, again, is almost everyone — support global cooperation in reducing the emission of greenhouse gases in order to minimize the damage.

But American conservatives, including not just Trump but most Republican voters and the vast majority of GOP politicians, see climate change as a phony problem invented by liberals and made up to emasculate white men by making them drive girly little cars. It's seen strictly in terms of the tribal struggle that Roberts describes. The fear of being contaminated by "liberal" habits runs so deep on the right that researchers at the Wharton School of the University of Pennsylvania found in 2013  that advertising lightbulbs as environment-friendly made conservatives less likely to buy them.

It's gotten so stupid that "rolling coal," a practice from truck-pull competitions of modifying diesel trucks so they waste fuel and pour huge amounts of black smoke into the air, has been adopted by ordinary right-wing vehicle owners, for no other purpose than to demonstrate contempt for those who believe air pollution is a bad thing. It costs at least $500 to modify a car or truck that way, so doing this just to troll liberals is a pretty significant financial commitment.

But, of course, wrecking the environment so your kids and grandkids face an uncertain future is an even bigger sacrifice that you make to fulfill this all-consuming desire to piss off lefty tree-huggers.

“The right-wing media views the world in us-vs.-them terms, win-lose terms," Lisa Hymas, the director of the climate and energy program at Media Matters for America, said over the phone. "Liberals like the Paris agreement, so conservatives reflexively hate it.”

The conservative reaction to Trump's Paris decision really drove home how this is all — and I do mean all — about waging culture war against the left.

“For some reason or another, this issue of climate change has emerged as a paramount issue for the left in this country and around the world,” Vice President Mike Pence whined on Fox News on Friday.

Jim Geraghty for the National Review took a similar tone, suggesting that climate change is something liberals made up to force "punitive measures like higher energy costs" on conservatives while refusing "to make any discernible sacrifices themselves." That's the level of paranoia that the right has whipped up about this situation: They argue, with a straight face, that somehow conservatives will have to pay more for gasoline but liberals won't.

(For the record, this liberal gave up eating most meat about 17 years ago, in no small part because of the effect of meat production on global warming. But even if some or many liberals are hypocrites, that doesn't mean it's smart to shrug off the dangers of climate change.)

I must confess I responded to this tweet by linking to this Popular Science article of photos showing exactly how awful air pollution was in the years before the Environmental Protection Agency started regulating emissions.

Of course, the president himself used his speech to grind the culture-war ax. He whined about other countries supposedly demeaning the U.S. and proclaimed, "I was elected to represent the citizens of Pittsburgh not Paris." He reduced this massive environmental problem to a culture war between "Paris," a symbolizing cosmopolitan liberalism, and "Pittsburgh," a supposed symbol of provincial conservatism.

(The mayor of Pittsburgh did not appreciate his actually-quite-cultured-and-lovely city being demeaned in this fashion, and shot back on both social media and TV.)

The much-vaunted religiosity of American conservatives does little to compel them toward thinking about this issue, beyond the constraints of liberal-hating, culture-warrior nonsense. As historian Lisa Vox argued in The Washington Post, fundamentalist Christians tend to reject climate-change theory because they feel that it makes their god seem small and science seem more authoritative than faith.

Part of the reason that it's so easy for conservatives to view climate change in culture war terms, Hymas argued, is that the mainstream media has failed to educate the public about the seriousness of the problem. A Media Matters study of television news coverage of climate change found that in 2016 ABC, CBS, NBC and Fox combined devoted 50 minutes to climate-change coverage in their nightly and Sunday morning news programs. Not a single segment of that coverage was devoted to the potential climate consequences of the presidential election.

Believing that climate change is arrogant nonsense that liberals made up to prompt conservatives to feel guilty is a lot easier to do when there's very little mainstream news coverage to drive home both the evidence for climate change and the seriousness of this situation.

“Right-wingers are completely out of touch with the scale of the problem," Hymas said. "The fate of civilization is at stake, and they are celebrating scoring a political point against liberals.”