We mourn Manchester, but not Kabul: How biased coverage of terrorist attacks drives us apart 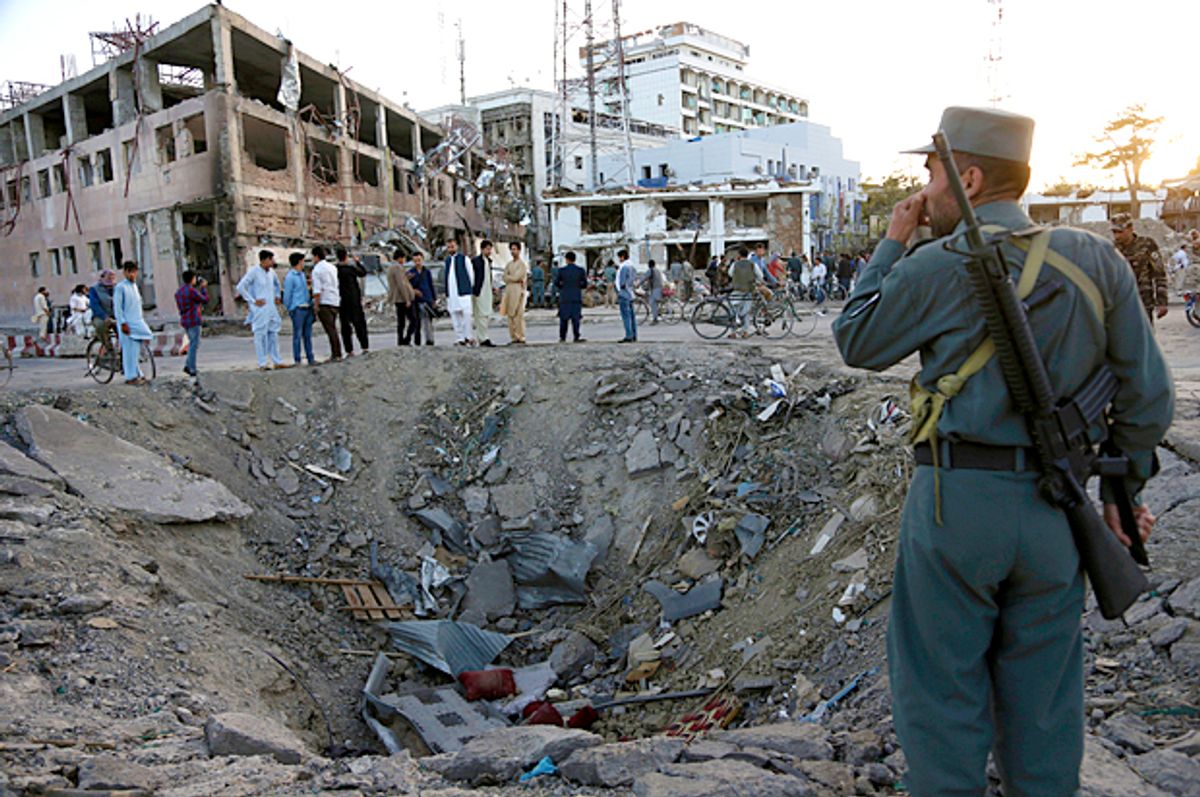 On May 22, a suicide bombing was carried out in Manchester, England, killing 23 adults and children and injuring 116. On May 29, twin bombings in Baghdad, Iraq, targeted families at an ice cream shop and seniors in line to collect their pensions. Those attacks left 22 dead and almost 100 injured. On May 31, a suicide bomb ripped through the diplomatic quarter in Kabul, Afghanistan killing at least 90 and wounding approximately 400.

Each of these stories was covered in the Western mainstream media. But the way they were covered was radically different.

In the Manchester story, there was a deeply human face to the coverage. Audiences became familiar with individual girls who lost their lives and they connected with the mothers who were searching for information about their loved ones.

Meanwhile, despite the fact that the Baghdad ice cream shop bombing also targeted children, the coverage of that story did not include any of the personal-interest features seen in the story of what happened in Manchester.

Much the same was true in the coverage of the Kabul bombing. A New York Times piece did mention the difficulties loved ones were having in tracking down information on those who were caught in the blast. But that piece also included strangely cold language: “In different corners of the city, workers and relatives dug graves for the ones who, with life having become a game of chance, just were not lucky.”

Imagine a reporter referring to those being buried in Manchester with the same sort of detached language.

In a recent piece for The Conversation, Philip Seib argues that the news of the Manchester attack represents a journalistic void. For Seib the problem is that media coverage heightens the public’s sense of vulnerability but fails to offer a holistic assessment of terrorism.

I don’t disagree with Seib, but I think that he misses another crucial problem: Coverage of terrorist attacks is massively biased. When the targets are neither white nor Western, and are Islamic, the sense of personal tragedy is almost entirely absent.

Consider this. Apart from Malala Yousafzai, few Westerners can you even name three Muslims who have been victims of a terrorist attack. If you stop to think about it, can you even picture three victims’ faces? Do you know their personal stories?

This lack of a human face tied to these lost lives represents a major failure on the part of Western journalists.

Even if we bracket out the loss of life due to U.S. air and drone attacks — a move I don’t suggest as a good one — the reality is that the majority of victims in today’s terrorist-connected conflicts are Muslim.

A 2011 report by the U.S. government's National Counter-Terrorism Center (NCTC) found that “Muslims suffered between 82 and 97% of terrorism-related fatalities over the past five years." Similarly, according to Erin Miller of the Global Terrorism Database (GTD) at the University of Maryland, “between 2004 and 2013 about half of all terrorist attacks, and 60% of fatalities due to terrorist attacks, took place in Iraq, Afghanistan and Pakistan — all of which have a mostly Muslim population.”

If the raw numbers are reported and the incidents of the attacks are covered in the news, then the lack of awareness that most terror victims come from the Muslim community must be directly tied to the fact that we don’t associate a grievable life with those deaths.

Just as the media can play a role in informing the public of the broader context for terrorism, it has a role to play in shaping the public narrative of which lives matter and which don’t. Even worse, this biased coverage makes it impossible to see the victims of terrorist attacks as part of the same community.

Which leads me to Donald Trump. Recall that shortly after the inauguration the Trump team suggested that the media ignored covering terrorism.

Speaking to troops at MacDill Air Force Base in Florida, the headquarters of the U.S. Central Command back on Feb. 6, Trump cited a series of recent terrorist attacks and then added, "It's gotten to a point where it's not even reported, and in many cases the very, very dishonest press doesn't even want to report it."

Only days earlier Trump counselor Kellyanne Conway made the false claim that Bowling Green, Kentucky, was the scene of a massacre carried out by Iraqis that had been ignored by the media. She had cited the fabricated attack as grounds for the immigration ban that targeted predominately Muslim nations.

Between Conway making up attacks that never happened and Trump insinuating that the media was covering up the prevalence of attacks, the media reaction was to correct the record. In response to the list of attacks offered by the Trump team as proof of media collusion with terrorists, most articles covering the story focused on the fact that Trump was wrong about the lack of coverage.

Kattie Mettler and Derek Hawkins pointed out, though, that the real story behind Trump’s list wasn’t the fact that the 78 stories had actually been covered; it was the fact that the list was almost entirely made up of Western victims. They point out that some of the countries hardest hit by terrorist attacks were omitted entirely.

For instance, in 2015, nearly three quarters of all deaths from terrorist attacks occurred in five countries — Afghanistan, Iraq, Nigeria, Pakistan and Syria, according to the State Department.

Mettler and Hawkins cite a Washington Post analysis of all terrorist attacks from the beginning of 2015 through the summer of 2016 that shows that the Middle East, Africa and Asia have seen “nearly 50 times more deaths from terrorism than Europe and the Americas.” That study revealed that 658 people were killed in 46 attacks in Europe and the Americas, while 28,031 people died in 2,063 attacks in the rest of the world.

I don’t have enough space here to do justice to the multiple non-Western examples of lives lost due to terrorism, but I do want to suggest that Afghan victims suffer a specific dehumanization tied to the U.S. public’s tendency to tie that nation to the events of 9/11.

If there is a need for a new hashtag — #AfghanLivesMatter — it is precisely because there is yet another category of humanity that demands to be recognized and valued. While the story of the treatment of the Afghan community by the West is long and complicated, it would be fair to say that current media coverage is deeply connected to the way that the U.S. justified starting a war there after 9/11.

It is not surprising that the media painted a portrait of Afghanistan post-9/11 that justified the U.S. invasion and depicted the United States as a savior rather than an invader of the country. Nevertheless, these types of media practices meant that Western audiences learned very little about the actual impact of the U.S. war on the Afghan people. Even though George W. Bush had described the invasion as an effort to save Afghans from the Taliban, most reporting refused to consider the human side of the story.

In her account of working in Afghanistan after 9/11, former NPR reporter Sarah Chayes wrote that the greatest challenge she faced during the conflict was not local hostility to Western journalists but rather the difficulty reporting back to a “traumatized nation.” She mentions countless examples of reporters whose pieces were censored and rejected by their U.S. editors.

She writes that a Pulitzer Prize-winning journalist told her he had been blocked from doing any reporting: “We were just supposed to dig up stuff to substantiate their foregone conclusions.” She further mentions a CNN reporter who had received explicit instructions not to film civilian causalities.

When she herself did a story on civilian causalities for NPR, she received “vituperative reactions" from listeners: “One said he was so angry that he almost had to pull his car off the road to vomit.” Another wrote that she was tired of listening to the “whimpers of afghany [sic] children, the pleas of parents who have lost loved ones.”

Rather than tolerate such “propaganda,” the listener defiantly claimed she would “listen to a Mozart CD for the rest of the morning.”

Clearly even lefty, liberal, snowflake NPR listeners could not tolerate the idea that Afghans were actual human beings who might suffer as a consequence of the military strikes.

Even less tolerable was the idea that Afghan civilian losses could compare to those who had suffered on U.S. soil on 9/11. Rather, the Afghan people were seen as irremediably different and justifiably disposable. They were not quite human, or at least not human in the same way as those from the West.

This attitude helps explain why reports of strikes on Afghan weddings didn’t lead to a massive emotional outpour in the West.

Even worse, when a U.S. Army sergeant went on a killing spree in Panjwai, Afghanistan, in 2012, leaving 16 civilians dead, nine of them children, the bodies were counted but the stories of the lives lost were ignored. The man gathered 11 bodies, including those of four girls younger than six, and set fire to them, but those deaths weren’t felt in the same way as those of the girls who died in Manchester.

While in theory most of us would argue that all lives matter, in practice it is important to note that affective bias is inevitable. We care more when we lose a loved one than when we hear about a stranger’s death. The emotional gap that makes some lives matter and others less valuable is almost impossible to completely bridge. Scholars of ethics will often explain that proximity — the sense of closeness to another — will determine our empathy for another life. It isn’t possible to care about everyone equally.

But it is possible to examine which lines of connection we value and why. It is also possible to determine the outcomes of these differing values. The lives we mourn are part of the imagined communities we inhabit and they form the affective bonds that help us struggle for change.

How is it that a mother in the United States feels more sadness and distress over a young girl dying at a concert in England than one burnt to death in Afghanistan? Why are those girls not connected in our minds?

These different reactions stem, in part, from the way that the media depicts these deaths. Next time you see an article on a terrorist attack, watch for the way that the victims’ stories are told.

Are the images shown grotesque and dehumanized? Do we see photos of the person before the atrocity or only after? Are the stories only about the attack or do they cover any information on the lives cut short? Is the victim treated as “unlucky?” Or as a tragic loss? Do we see photos of those mourning the death?

If we want to stop the constant inflow of stories about terrorist attacks, we need to start linking the victims of these attacks. Until we can see a common connection to those victimized by terrorism, we aren’t going to find a common solution to it.