Jason deCaires Taylor's submerged sculptures are his signature. Damien Hirst had a similar idea. Rip-off or not? 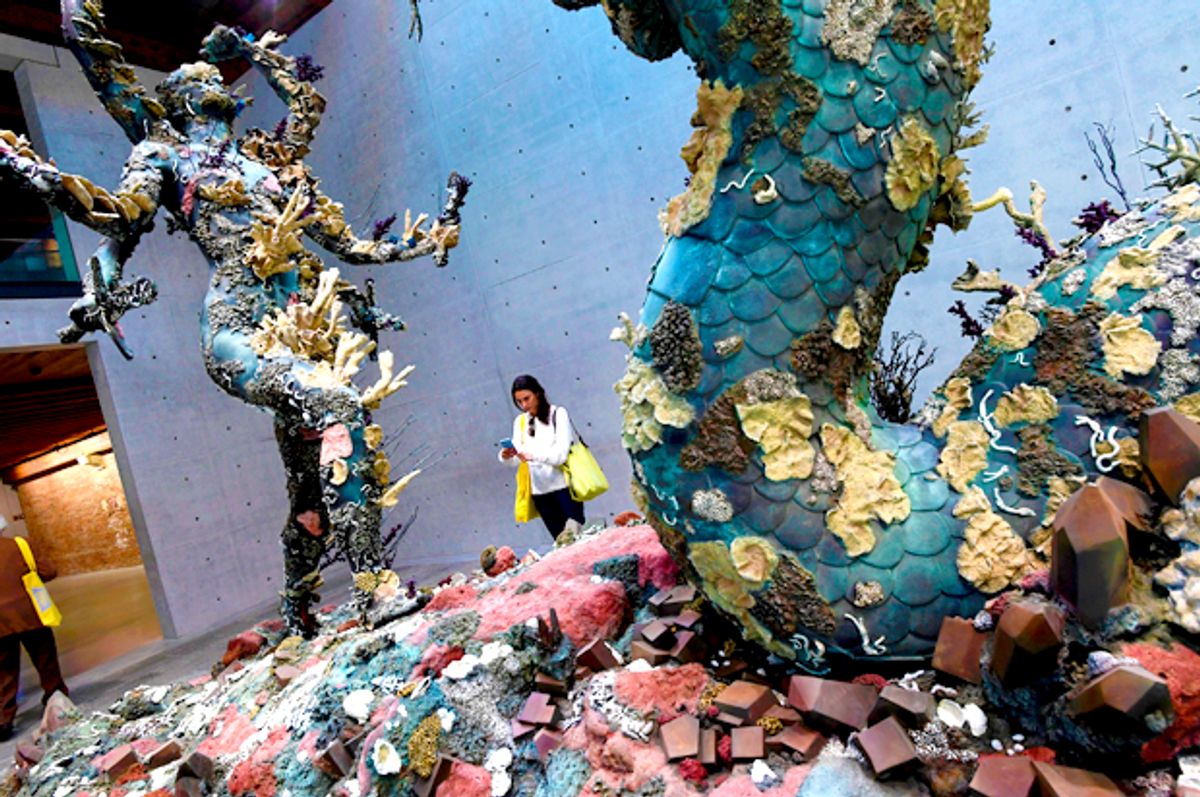 The talk of this May’s Venice Biennale was not the brilliant idea of a great artist but rather the brilliant idea of two great artists who happened to have had the exact same idea. It’s an awkward sort of moment, like when two Hollywood starlets show up on the red carpet wearing the exact same glamorous ball gown that each thought was a unique, bespoke piece of couture. But the question on everyone’s mind, once the awkwardness passed, was whether anything illegal or immoral had taken place. Had one of the artists stolen the idea from the other? Or was this just a monumentally weird coincidence?

The drama was heightened by the fact that both of the artists are renowned, but one is arguably the most famous artist alive, and is in a close race for the title of the highest-earning artist in history: Damien Hirst. The naughty imp of the contemporary British art scene is known for a dark and incubus-like sense of humor. If there were any artist who might pull some sort of stunt like this on purpose, he seemed like a good candidate. But the reaction of his camp suggests nothing of the sort. There was genuine concern and official statements from lawyers and nothing particularly fun or funny about it.

The problem is this: Both Hirst and the artist presenting at the Grenada Pavilion, Jason deCaires Taylor, presented installations at the Biennale that were meant to look like ancient sculptures that had been lodged for centuries at the bottom of the ocean, after a shipwreck or natural disaster, and recently salvaged but not cleaned. Thus we have naturalistic life-size statues of humans covered in various oceanic growth, coral and debris. Both are accompanied by murky underwater photographs of the statues in situ, underwater where they were “discovered.” In Hirst’s case, these photos are staged, as the sculptures were never actually underwater. In the case of deCaires Taylor, his shtick as an artist is to sink new sculptures into the sea and let them be partially swallowed up by the undersea world then to photograph them. I know, weird “coincidence,” right?

Hirst’s installation is titled "Treasures from the Wreck of the Unbelievable" while deCaires Taylor’s is called "The Bridge." Anyone who sees both shows or reads about them logically asks, Well, who thought of it first and did whoever came up with it second steal the idea from the first guy? A fair enough question but a complicated one to answer.

Art sometimes but not always emerges with a “eureka moment” or it's made all in one go. But just as often ideas gestate for years, sketches are made, concepts toyed with, works partly created then set aside and so on piecemeal. DeCaires Taylor is pretty much the go-to guy when it comes to underwater sculpture installations, the first artist to take up the land art movement, which is associated with man-made (or man-arranged) terrestrial installations that the artist permits Mother Nature to engage with, and erode, as she sees fit. In 2006 he set up the world’s first underwater sculpture garden, which visitors can admire by snorkel or scuba, in the sea beside the island of Grenada. So it is reasonable of him to feel that this is his territory and that it has been encroached upon.

For his part, deCaires Taylor has taken the high road and issued a statement that is just about devoid of hard feelings, saying, “After viewing Hirst’s latest exhibition, it seems I have certainly created an art genre that has been responded to.” He went on to say that the message behind his art is very different from Hirst’s. He tries to send environmental messages, and the main sculptures in his Biennale show, titled "Bleached I" and "Bleached II," refer to “coral bleaching,” a damaging by-product of global warming.

Hirst, on the other hand, is in it for the fun and the spectacle. Being a big enough gun to speak through spokespeople, a statement was issued on his behalf: “Damien has always been fascinated by what he describes as ‘the action of the world on things’ and he became interested in coralized works in the late 90s, when he sunk some objects off the coast of Mexico.” Both artists can claim to have been into sinking sculptures underwater for decades. The art looks different, even if the broad-stroke concepts are strikingly similar. So there is no question of direct replicas or forgeries.

But did one person steal the other’s intellectual property? Can the concept of a work of art be protected? You certainly could not claim intellectual property theft when more than one artist thought to sculpt the execution of the 1st-century Jewish tekton who thought he was the Messiah. There are a good deal more crucifixes around the world than you could shake many sticks at, and though the concept and subject matter are extremely specific, no one is suing anyone else for making Crucifixion sculptures.

When in doubt as to a legal matter in the art world, I turn to Edgar Tijhuis, an Amsterdam-based art crime specialist and lawyer. On this issue, he said, “It is definitely a rare coincidence that potentially raises questions about intellectual property. But it is doubtful whether there is any objective legal basis for action on the side of Jason deCaires Taylor against Damien Hirst, especially since Taylor himself stressed the differences between their respective works and Hirst claimed (through a spokesperson) to have been interested in this kind of work since the late 1990s.” Unless some document surfaces that overtly demonstrated otherwise, this will remain just a coincidence, even if a suspicious one, and not an idea of theft that could be proved in court.

It is interesting that no one seems worried that deCaires Taylor got the idea from Hirst. It has been his calling card as an artist, whereas Hirst dips into this and that, with that middle finger-wielding naughty prankster attitude being the most consistent element in his oeuvre. Hirst is also one of the richest artists to have ever lived and has a vast staff promoting and protecting him, so he’s the one who feels vulnerable to attack. This was evident from his reticence, allowing a spokesperson to make a statement for him, whereas deCaires Taylor was being jokey on social media and appeared the one with nothing to hide.

Ideas float (or in this case, perhaps sink), and the history of art is largely populated with a relatively small number of concepts and scenes that artists use and reuse, repeat and reinterpret ad infinitum. This happened with the textual inspirations for most historical Western art (the Bible, the Golden Legend, pagan mythology, Ovid, true history) and the limited scope of imagination of most commissioners of older Western art, who liked to patronize religious art and portraits of themselves and their families. A visual lexicon of just a few hundred subjects fills a good 80 percent or more of Western art history books. Overlap is part of the game.

With that in mind, perhaps the best we can take out of this is to look at the two shows side by side, and determine the ones we deem most successful. The ideas are the same, but what of the execution and the refinement, the use of the general concept? In a courtroom, there would be no winner in this case. But gallery versus gallery, show versus show, who did a better job with the raw conceptual material, transmuting it into tangible art? That’s up to you.