Why can't Hillary let it go? Donald Trump’s not the only one still obsessing over the election 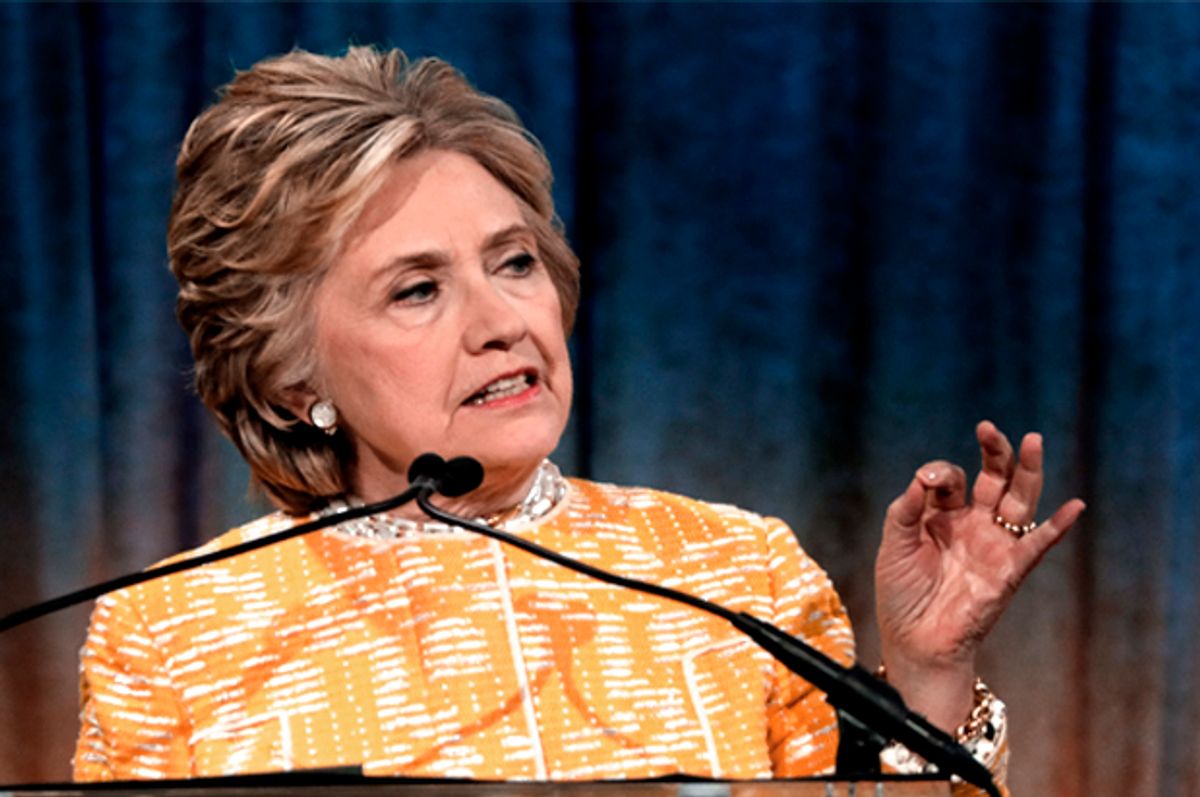 Hillary Clinton may have finally lost the plot.

Last year's defeated Democratic presidential candidate spoke to journalists Kara Swisher and Walt Mossberg at the Code 2017 conference in California on Wednesday about the reasons for her election loss — and there is a whole lot to unpack.

I’ve never run for president, but I imagine political losses of the magnitude suffered by Clinton are very hard to get over — and not just for the candidate. I personally know many people who voted for her who are still wandering around in a state of disbelief. For diehard supporters, the loss hurts in a visceral way that lingers.

But there comes a point when you just have to accept reality — and Clinton herself seems to be having a tough time with that. The Code interview offers pretty broad insight into Clinton’s psyche, nearly seven months on from the election.

The conversation starts with Mossberg asking Clinton to name one major misjudgment — discounting any outside forces — that her campaign made and that she wishes she had done differently. It took Clinton 17 seconds to mention the word “Russians” — and a further 10 seconds to bring up the way her private email server was used against her. Keep in mind, this was after Mossberg asked her to name just one legitimate mistake she and her campaign made. She couldn’t do it.

Clinton has always believed she is the victim of vast conspiracies — and so the conversation continues pretty much in the same vein for another 75 minutes, with Clinton providing probably her most extensive list yet of reasons why she lost, which, naturally, had absolutely nothing to do with her.

Clinton really threw these guys under the bus. The data the Democratic National Committee provided to her campaign was “mediocre to poor, nonexistent, wrong,” she said.

But according to some of those data gurus who spoke to the Daily Beast, Clinton is plain wrong about that. John Hagner, who worked as national field director for the Democratic Senatorial Campaign Committee, told the website: “The DNC is farming and what the campaign does is cooking. It’s hard to blame the farmer if the soufflé folds.”

A less eloquent version of the same sentiment came from Andrew Therriault, who had worked as the DNC’s director of data science. He called Clinton’s claim “fucking bullshit” on Twitter, adding that the data he had seen showed that crucial Rust Belt states like Michigan and Wisconsin were not looking “even close to safe,” but that Clinton’s team “thought they knew better.”

Fake news (and the Russians)

According to Clinton, the “vast majority” of news posted about her on Facebook was fake, because “1,000 Russian agents” were paid to make up stories about her. Obviously, it’s beyond dispute that there were plenty of crazy, fake news stories about Clinton during the campaign, but that it was the “vast majority” is hardly clear — and the claim of “1,000 Russian agents” was an unconfirmed report.

Clinton is also sure that the Russians “could not have known” how best to manipulate and weaponize information against her without being “guided” by the Trump campaign.

Twitter, too, Clinton said, has been “victimized” by “deliberate efforts to shape the conversation” — as if efforts to shape political narratives were some strange phenomenon that popped up in 2016 just to spite her.

WikiLeaks (and the Russians)

WikiLeaks dumped the John Podesta emails immediately after Donald Trump’s infamous “grab ’em by the pussy” tape leaked to the media. According to Clinton, this means that Julian Assange's outfit and the Russian government are “the same thing.”

This accusation is linked to the suggestion that the Trump campaign was “guiding” the Russians by telling them when to release certain information. But would communication at that level really be necessary?

Let’s give the Russians some credit. If you’re intensely following an election and committed to engineering its outcome, it’s hardly rocket science to know when to drop a damaging piece of information. If Russia was really behind the hack-and-dump operation, Putin's operatives probably didn’t need Trump to jump in and say “Hey, I’m in a tough spot, so now would be a great time to drop those Podesta emails!”

Aside from the matter of who leaked what, Clinton spends no time rehashing the actual content of the various leaks and is in complete denial that any of her emails could have hurt her. In fact, she says that everything in those communications was “run of the mill” campaign stuff.

Nor does she address the fact that former DNC chair Debbie Wasserman Schultz was forced to resign over revelations that the party appeared to be working with Clinton to deny Bernie Sanders a fair shot at the nomination. Or the fact that CNN contributor (and later interim DNC head) Donna Brazile fed a debate question to Clinton's campaign ahead of time.

These are all things Clinton could have raised when Mossberg asked her what misjudgments and mistakes she made along the way to her agonizing defeat. But, hey, maybe the Russians made them do it.

Barack Obama was able to break the racial barrier because he is “an attractive man," Clinton said. This peculiar comment seemed to imply that Clinton believes she could not break the gender barrier partly due to her appearance.

People, she said, have “a set of expectations about who should be president and what a president looks like.” Obama “broke that racial barrier — but you know, he’s a very attractive, good-looking man.”

Clinton also thinks it was sexist to use the fact that she was paid hundreds of thousands of dollars for Wall Street speeches against her. Men also got paid for speeches they made, so that was “unfairly used” to hurt her.

OK, fair enough: Clinton does get criticized more harshly for some of the same behavior as men, and no doubt there is plenty of sexism surrounding the physical appearance of women in politics. But let’s not feel too sorry for her when she’s pocketing hundreds of thousands of dollars to reassure Wall Street bankers that she holds both a “public and private position” on certain issues.

Because Netflix has too many anti-Clinton documentaries.

“Go to Netflix and say you want to see a political documentary, eight of the top 10 — last time I checked a few weeks ago — were screeds against President Obama or me, or both of us.”

The strangest thing about this might be that Hillary Clinton is actually checking Netflix to see how many unflattering documentaries there are about her.

James Comey (and the mainstream media)

When then-FBI Director James Comey announced that the investigation into Clinton’s emails would be reopened, less than two weeks before the election, the media covered it “like it was Pearl Harbor” — “front pages everywhere, huge type, etc.”

Maybe they should have buried it somewhere in the back and used smaller font?

This one might be my favorite because it’s so lacking in self-awareness. Clinton complains that she was “the victim of a broad assumption” that she was going to win.

This is amazing, because no one was more certain of Clinton’s victory than Clinton and her staffers. They barely bothered to campaign in some states, convinced beyond doubt that they would go blue. The campaign organized an election-night fireworks display over the Hudson River, which it only canceled a day before voters went to the polls, when things were starting to look a bit dicey.

But even on Election Day, her aides were so sure of victory that, according to the New York Times, they popped Champagne on the campaign plane before the polls had even closed.

Hillary Clinton has officially jumped the shark with this interview. It’s time for an intervention in Chappaqua, because the longer she continues on like this, the more damage she’s going to do to her party.

Much as it may be therapeutic for Clinton herself, talking about Russia and Comey and sexism and WikiLeaks for the next God knows how long won’t help Democrats win back seats in Congress.

People rightly lampoon Trump for obsessing over the election like the child he is. Well, it’s been nearly seven months and Clinton is still going around acting as though she’s history’s greatest political martyr, regaling us with new reasons why none of the blame for anything that went wrong lies with her.

Democrats need to get their act together. They need to talk about policy and get serious about how to fight Trump on issues of far greater importance than how many bots are following him on Twitter. Hillary Clinton now claims to be part of the “resistance” to Trump, but she’s still fixated on herself.