“We want to get our crew, equip a boat and set sail to chase down these enemies of Europe” 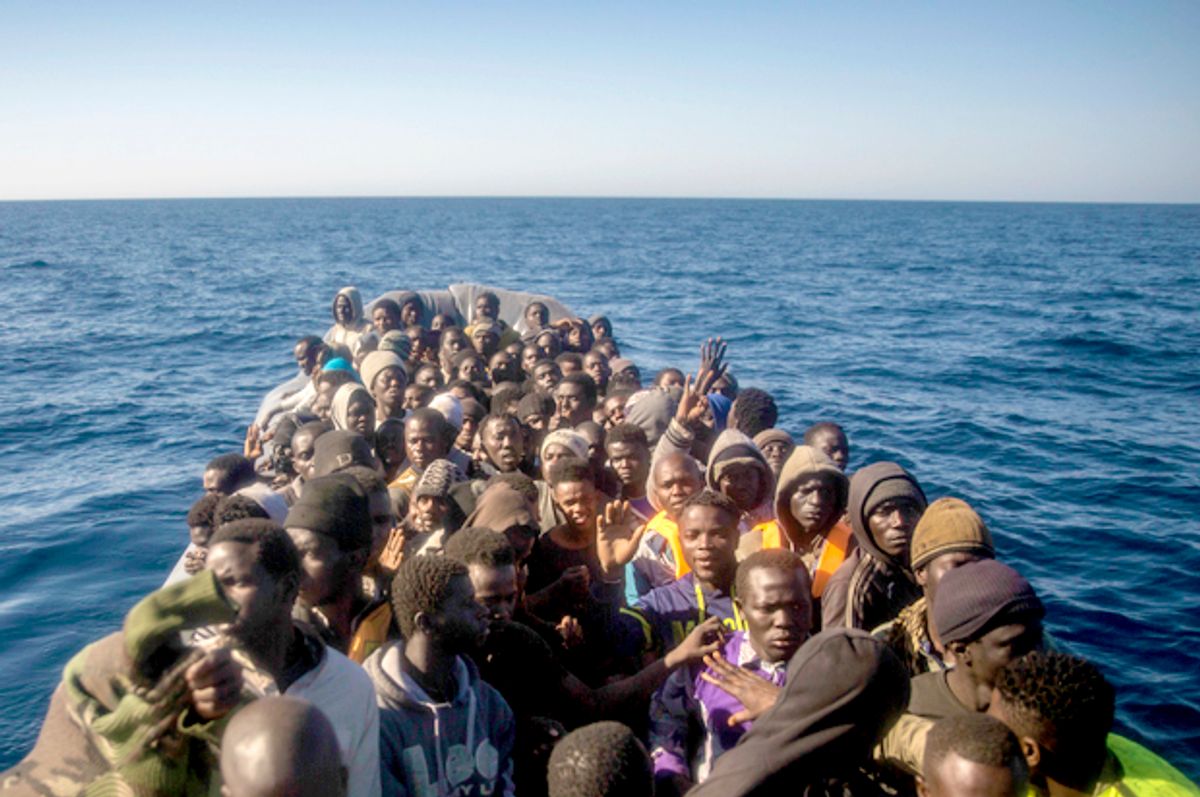 After surviving a treacherous journey by land, including reported “public slave markets,” to endure an even more harrowing trek across the Mediterranean Sea, refugees seeking asylum in Europe by boat are now being targeted by far-right activists who want them to drown.

A right wing anti-immigration youth group is attempting to physically block boats full of people coming from North Africa. More than 1,600 refugees have already died crossing the sea in 2017, according to the United Nations. Still, more than 71,000 migrants have traveled across the Mediterranean into Europe in the past six months, angering Europe’s far-right “identitarian” activists who are now trying to let boats full of refugees sink in the Mediterranean.

“It’s a mission to rescue Europe by stopping illegal immigration. We want to get our crew, equip a boat and set sail to chase down these enemies of Europe,” said one member of Génération Identitaire — the French youth movement which emerged in 2002 as part of the Nouvelle Droite (or New Right) — in a video posted on the group’s Facebook page. The video, posted on May 14, has over 246,000 views.

Identitarians claim allegiance to an ideology that calls for an end to multiculturalism and mass immigration. It started in France in the mid-2000s, caught on in Austria and is now active in many countries across Europe including Germany and Italy. The Economist has described the German arm of the group, Identitäre Bewegung, as “racists in skinny jeans . . . repackaging [far-right] ideas to a younger audience.”

In their stylized video, the far-right group of young men speak directly to the camera as images of migrant rescues at sea and terror attacks on Europe’s mainland are intercut.

“Mass immigration is changing the face of our continent – we’re losing our safety, our way of life,” another member of the anti-Islam and anti-immigrant movement said in the video.

On the campaign’s newly launched website, the group implores visitors “stop the invasion”:

Ships packed with illegal immigrants are flooding the European borders. An invasion is taking place. This massive immigration is changing the face of our continent. We are losing our safety, our way of life, and there is a danger we Europeans will become a minority in our own European homelands.

The group writes that “humanitarian NGOs traffick hundreds of thousands of illegal immigrants in Europe and endanger the security and future of our continent. They are responsible for the mass drowning of thousands of Africans in the Mediterranean.”

As The Observer recently reported, the group has raised nearly $100,000 in less than three weeks through an anonymous crowd funding campaign. The group says it plans to pay for vessels, travel costs and film equipment. Italian Identitarians claim they have been offered ships and support from people with boat driving licenses.

The group has found a foothold in the U.S. as well.

When a French far-right group disrupted a rescue ship off the coast of Sicily last month, Breitbart reported the group’s test run as “the hipster-right” blocking the “ships of a pro-migrant NGO.” The right wing website, whose former CEO Steve Bannon left to serve as President Donald Trump’s senior White House adviser, also recently ran “a rare exclusive interview” with the leader of the Paris branch of the Identitarians ahead of France’s presidential election.

America’s alt-right darling Richard Spencer and his National Policy Institute held a “Why I’m An Identitarian” essay contest in 2015.

And just last week, two U.S. Marines were arrested at a pro-Confederate rally after unfurling a large banner that bore the Identitarian movement’s symbol.

In reaction to the far-right's anti-refugee campaign, however, at least one competing GoFundMe page was set up to aid the efforts of the search and rescue teams of Doctors without Borders.