Trump's appalling response to London makes it clear: He must go before it happens here

Our president's juvenile and self-serving response to the London tragedy makes it clear: He can't do this job 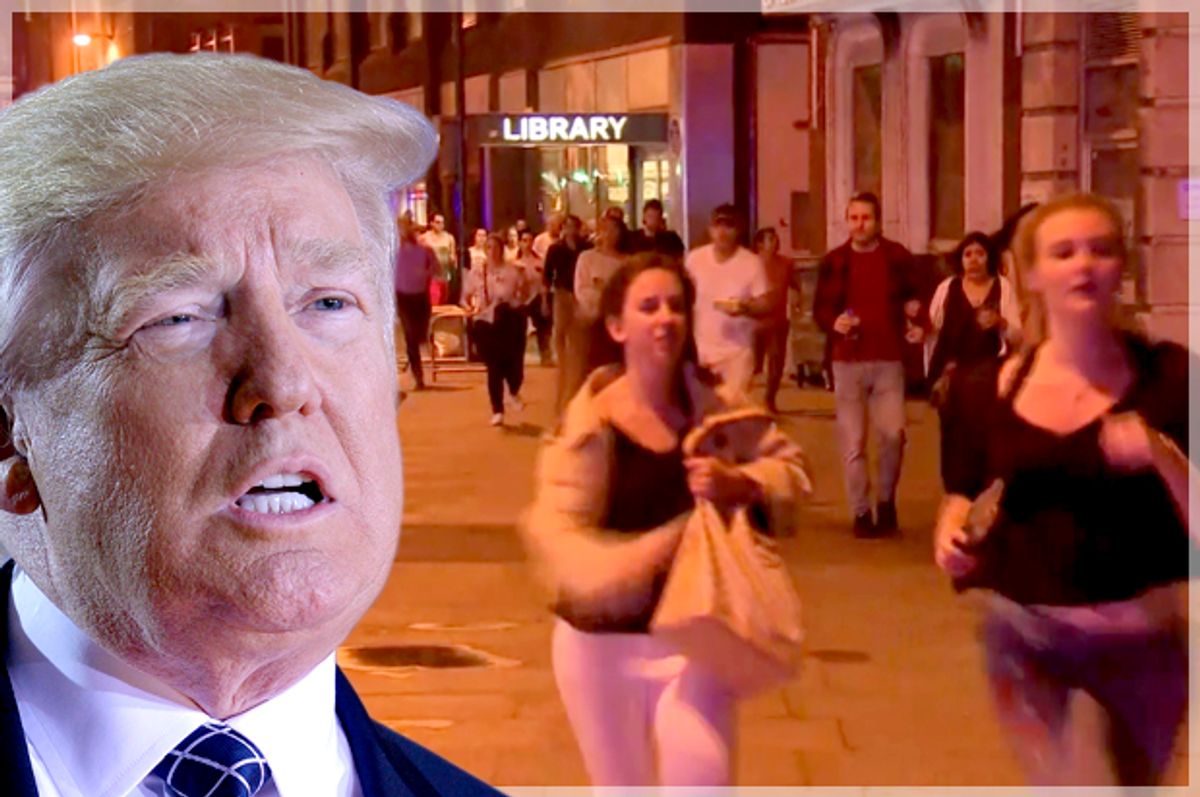 Perhaps I should be telling this to a professional therapist, but whenever we’re ensconced in a news cycle revolving around something damaging, dangerous or ridiculous that President Donald Trump has said, or, for that matter, whenever there’s a new batch of revelations about the Trump-Russia story, I wonder when the other shoe is going to drop. Rewinding back 16 years, I can remember when George W. Bush’s first summer in office was a big, fat pile of nothing. It was the “Summer of the Shark” and the Gary Condit scandal, and it was easy to see the distinct possibility of the president becoming “One Term W.”

And then 9/11 happened, and the scoreboard was entirely reset. Nothing that preceded that event mattered much and Bush’s approval rating spiked from the low 50 (and declining) to 90 percent. Granted, Trump’s rap sheet is exponentially longer and more serious than Bush’s at this point in his presidency, and therefore it’s possible a major terrorist attack on American soil might not have the same impact on Trump’s approval numbers.

Then again his numbers always seem to jump when he executes an ordinary, textbook presidential action — delivering a speech without blurting out the nuclear codes or administering purple nurples to the Democratic leadership — propelled by certain cable-news pundits who seem obsessed with pinpointing moments when Trump is said to become "presidential.” They would surely have a whopper of an occasion when or if there’s a major terrorism attack and he is forced to react.

Unfortunately, Trump’s reaction on Twitter to the dual stabbing attacks in London vindicated my deep concerns about the current president in the aftermath of a 9/11-style event. Whenever there’s a tweetstorm as awful as Trump’s London Bridge tweets, I can’t help but become impatient for the Trump-Russia investigation to move faster, in part to force this toddler to resign before the other shoe drops — before something on the scale of 9/11 occurs here.

The possible outcomes in terms of presidential politics range from horrendous to catastrophic, knowing that Trump occupies the Oval Office. He’ll either skyrocket in popularity, making him invulnerable to resignation or impeachment, or he’ll lash out using our military and begin to indiscriminately bomb everything in sight. Or he'll do both. I’m leaning toward a modest bump in popularity, maybe into the upper 50s, which will be more than enough political capital for him to do some real damage. After all, Trump is being graded on such a massive curve, he doesn’t need a 90 percent approval rating to act like he has one.

We can’t let it come down to this. We’ll circle back to why, but first let’s review Trump's tweets about London.

His first reaction on Saturday was not to compose an earnest and presidential statement of solidarity and support for the victims, nor was it a summary of what he heard from his national security team. There was no statement of leadership, no words of comfort for frightened citizens around the world. His first reaction was to retweet Matt Drudge’s version of the story. It was as if Barack Obama retweeted the Weekly World News in the immediate aftermath of the Sandy Hook school shooting. Being president and all, Trump has a universe of information at his disposal, yet he delivered the words of Matt Drudge to millions.

Of course, Twitter users were rightfully outraged about the retweeting of Drudge, so Trump tweeted, “We need to be smart, vigilant and tough. We need the courts to give us back our rights. We need the Travel Ban as an extra level of safety!” Yeah, this time he exploited the attack to tweet a super obvious pitch for his “travel ban” — making his efforts in court to uphold his Muslim ban even more challenging.

Unless he knows something we don’t know, the three attackers in London weren’t refugees, so it’s easy to infer that he was referencing Muslims in general here. It’s almost as if he had been deliberately sabotaging his chances in court, but he was not. He’s just politically stupid. He doesn’t know that his words can be used, as they already have before the 9th Circuit already, to characterize his motive for his Muslim ban. Yet he keeps blurting out things. Trump knows nothing.

Speaking of the courts, it’s not clear what Trump was talking about when he wrote, “We need the courts to give us back our rights.” What rights? How is striking down the Muslim ban a trespass against my rights? If anything it protects the rights of Muslims. I thought the GOP was all about passing religious freedom laws. If these laws are strictly about freedom for Christians — and one such law was signed by Vice President Mike Pence when he was governor of Indiana — they should have the balls to say so.

Nevertheless, Trump’s tweetstorm continued by finally expressing some sympathy: “Whatever the United States can do to help out in London and the U.K., we will be there -- WE ARE WITH YOU. GOD BLESS!” That’s more like it but as was the case with his four attempts to correctly spell “hereby,” it was several tweets too late. He had already thoroughly beclowned himself.

Further erasing the fake sincerity of the previous tweet, Trump added, “We must stop being politically correct and get down to the business of security for our people. If we don't get smart it will only get worse.” Stupid, stupid, stupid. This was the second tweet in an hour (and not the last) in which he made it abundantly clear that his “travel ban” is all about Muslims. "Political correctness" in the context of a terrorist attack has everything to do with respecting peaceful Muslims rather than profiling them, and Trump seems to be opposed to doing that. He’s certainly not talking about political correctness when it comes to Black Lives Matter. So once again, Trump idiotically sabotaged his own Muslim ban.

Making matters worse for himself, Trump tweeted, “At least 7 dead and 48 wounded in terror attack and Mayor of London says there is ‘no reason to be alarmed!’” The mayor of London, Sadiq Khan, happens to be a Muslim, so here we go again using the attack to vilify peaceful Muslims who had absolutely nothing to do with this atrocity and are as horrified as everyone else. Besides, what was Khan supposed to say? “Everybody run for your lives!”? What will Trump say when there’s a major attack here?

Trump’s final tweet on the subject was easily the dumbest: “Do you notice we are not having a gun debate right now? That's because they used knives and a truck!” Right, Mr. President, they likely used “knives and a truck” because of the strict anti-gun laws in England. If those laws didn’t exist, it’s entirely possible the attackers would’ve used semiautomatic assault rifles, killing significantly more people. We’ll never know for sure, but it was Trump who linked London to the gun debate, so here we are. It’s fair to ask whether the attackers would’ve traded their knives for AR-15s, if they easily could have. Common sense suggests they might have.

The urgent need for Trump’s resignation or impeachment couldn’t be greater. There are legal mechanisms that could be used to avoid Trump's continuing on and, like Bush, possibly rebranding himself as a war president. While it’s important for the investigators to be deliberate and thorough, Trump’s presidency is creating irreparable damage to the system as well as America’s stature as a superpower, so a bit of investigatory hustle is in order.

Our president thinks his job is to be the most famous cable-news pundit (or troll) in the world, not realizing that blurting 140-character comments isn’t the purview of the president and only serves to badly embarrass the nation. There are people who get paid to scream semi-coherent gibberish on television. Presidents have a far greater responsibility and their words matter. If Trump wants to be a pundit, I’m sure Fox News will gladly pay him to wedge his copious girth between Steve Doocy and Brian Kilmeade on "Fox & Friends." But that’s not his job yet it should be. His presidency itself is a crisis and he needs to go — now, before he gets a chance to reset his scoreboard with a major tragedy.