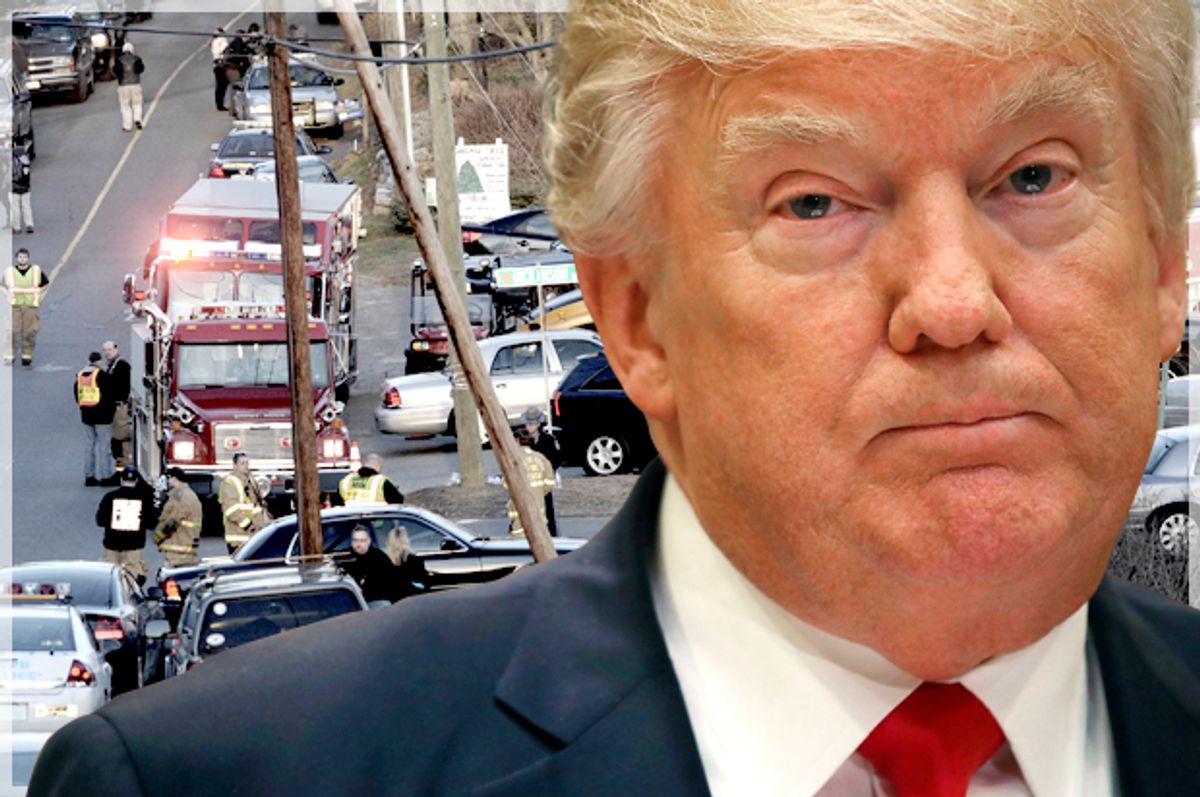 Facebook
Twitter
Reddit
Email
Has there ever been a more infantile American president than Donald Trump? I don't think so. We've had profane presidents and clumsy presidents and corrupt presidents but the lack of discipline, grace and poise in the face of tragedy shown by our current leader is unique. No president in history has ever engaged in a stream of shallow, immature statements the way Trump did on Sunday morning after the latest terrorist attack in London.

He used his Twitter account to boorishly assail the mayor of London for saying that people shouldn't be alarmed, but Mayor Sadiq Khan never said that. Moreover, even if he did, it's a perfectly reasonable thing to say. Britain is, after all, the country that famously deployed public service announcements, saying, "Keep Calm and Carry On" when its major cities were being bombed nightly during the Blitz in World War II.

Trump also used the occasion to inappropriately flog his travel ban and said, "We must stop being politically correct and get down to the business of security for our people. If we don’t get smart it will only get worse.” During the campaign "getting smart" was defined as torture "worse than waterboarding," "taking out the families" of terrorist suspects, "bombing the shit out of them," spying on mosques and beheading people if necessary.

But the most fatuous of Trump's early morning statements had to be this one:

It's hard to know where to start. The "gun debate" has nothing to do with terrorist attacks, per se. Yes, some terrorist attacks are carried out using guns. And when they are, people rightly point out that the attack would have been far less lethal had guns not been used. If the London Bridge attackers had used semiautomatic weapons of the kind easily obtained in the U.S., they might have killed dozens of people rather than seven. This is simply a fact.

But the argument set forth by Trump and his gun-proliferation zealots when guns are used is that the victims themselves should have been armed. These pro-gun advocates believe that people should carry loaded weapons at all times so they can fire into the crowd, trying to not hit too many bystanders while engaging in a firefight with the shooters.

That was certainly Trump's view after the Bataclan attack in Paris in 2015:

When you look at Paris — you know the toughest gun laws in the world, Paris — nobody had guns but the bad guys. Nobody had guns. Nobody. They were just shooting them one by one and then they (security forces) broke in and had a big shootout and ultimately killed the terrorists. You can say what you want, but if they had guns, if our people had guns, if they were allowed to carry — it would've been a much, much different situation.

After the Charlie Hebdo attack, Trump tweeted, "Isn't it interesting that the tragedy in Paris took place in one of the toughest gun control countries in the world?"

He was just a gadfly candidate then, so we had no reason to expect him to behave like a decent human being. Today he is president and his inappropriate taunting about gun control in the wake of another terrorist attack is outrageous, particularly since he was noticeably reticent to even mention the stabbing attack a few days ago by a self-described "patriot" who killed two men in Portland, Oregon. (Indeed, since his only acknowledgement of the attack came from his seldom-used official @POTUS Twitter account, it was probably sent by a staff member.)

In fairness, Trump doesn't only blame the victims of terrorist gun violence. He blames all victims of gun violence. For instance, while he has had little to say about the stabbings in Portland, two years ago he had a lot to say about the campus shooting in Roseburg, Oregon, where 10 people were killed and seven were injured. On the stump in Tennessee he read the Second Amendment aloud to his rapt audience and then said, "If you had teachers with guns you would've been a hell of a lot better off. I have a license to carry in New York, can you believe that? Somebody attacks me, they're gonna be shocked." Then he pantomimed a quick draw and added, "Can you imagine? Somebody says, 'Oh, there’s Trump, he’s easy pickins.'"

Then he "drew" again. After that he led the crowd in a chant of "Death Wish," in honor of the Charles Bronson vigilante movie by that name.

Trump's trolling of gun-safety advocates in the wake of the London attack is particularly vacuous, in light of the fact that the U.K.'s strict gun control laws prompted the terrorists to use knives and a vehicle to kill people. But armed police arrived quickly and shot the perpetrators within 10 minutes of the event. One would think that the "law and order" president would be impressed by that. But when it comes to guns, Trump is pro-criminal and vigilante all the way.

And yes, terrorists use bombs, too. In fact, it's their favorite method of mass killing all over the world. If a suicide bomber decides to blow himself up in your vicinity, a loaded gun isn't going to help you.

For perspective, here are some statistics to keep in mind as our President tries to gin up hysteria about terrorist attacks. These numbers are gleaned from the gun safety advocacy group Everytown:

1. On an average day 93 Americans are killed with guns.

3. For every one person killed with guns, two more are injured.

4. In an average month 50 women are shot to death by their intimate partners.

5. America's gun homicide rate is more than 25 times the rate of other countries.

The problem of terrorism is real and it's, well, terrifying. After we consider the death toll we face every day in America, the question becomes why so many people fail to see that the epidemic of gun violence in America is even more pressing.