Denial by another name: The Trump administration's climate rhetoric is just weasel words 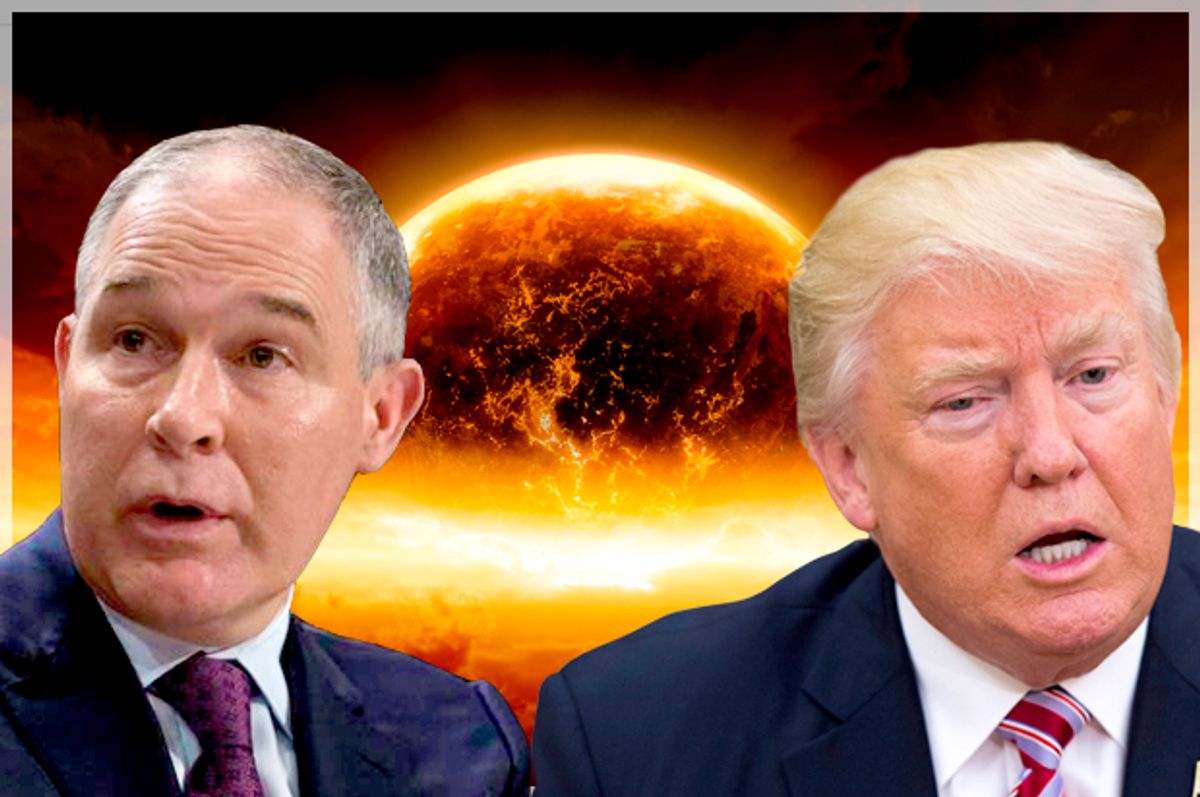 Before becoming president, Donald Trump repeatedly claimed that global warming was a hoax perpetrated by an international conspiracy consisting of thousands of scientists, people who want to raise taxes, the entire country of China, Barack Obama and those who wanted to deny him the right to use hair spray. Presumably, his rejection of this conspiracy — which is so large that it appears to involve millions, perhaps billions of co-conspirators — is why Trump made a big to-do last week out of pulling the United States out of the 190-nation Paris climate agreement.

But spokespeople for the Trump administration seem unwilling to admit that their boss is a raving conspiracy theorist who is pulling his presidential policy directly from his tinfoil hat. Instead, members of the administration spent the past few days soft-pedaling Trump's denial of climate science — and their own — spinning wildly to make it sound less like a nutty conspiracy theory and more like a series of reasonable doubts about the evidence.

On Friday, Trump's EPA head, Scott Pruitt, sneeringly said he doesn't "know what it means to deny the climate,” adding that while he acknowledged climate change is real, he believed that “measuring with precision, in my perspective, the degree of human contribution is very challenging.”

Ambassador Nikki Haley played the same game in a Saturday interview with CNN's Jake Tapper, saying, "President Trump believes the climate is changing and he believes pollutants are part of the equation," but she declined to say how much Trump accepts that human activity is the cause.

This change in tone may sound more reasonable than Trump's rants on Twitter about how the Chinese made up climate change, but John Cook, a research professor at the Center for Climate Change Communication at George Mason University and the founder of Skeptical Science, argued that Pruitt and Haley are just trotting out another form of climate denial.

“This is trying to put a good face on climate science denial," Cook said in a phone conversation. "Out-and-out claiming it’s a hoax is becoming untenable, so they’re trying to have a more respectable way to reject the science.”

These folks realize, Cook said, that flat-out denying the scientific consensus about climate change makes a person sound like a conspiracy theorist. So when the audience is educated journalists writing for mainstream publications, the strategy is to "magnify uncertainty" about exactly how much of a contribution human activity is making to the planet's warming.

But this softer form of denial is still denial of scientific facts. In 2014 the Intergovernmental Panel on Climate Change reviewed the totality of climate science research and concluded the scientific community is 95 percent certain that humans are the dominant reason for climate change. Scientists have also ruled out hypothesized nonhuman causes. Trump's people want voters to believe there's a question mark where there are, in fact, solid and certain answers.

No one should accept these soft denials as somehow less of a problem than more blatant forms, Cook argued.

“There’s a whole spectrum of different denialist arguments from ‘It’s not happening’ to ‘It’s not us’ to ‘It’s not bad’ et cetera," Cook said. "But all these arguments have the same conclusion, that we shouldn’t act. So I wouldn’t call it a progression or an improvement. I would call it a shift.”

This strategy of shifting toward more reasonable-sounding rhetoric when facing down skeptical audiences is hardly unique to climate change denialists. In January, I interviewed historian Deborah Lipstadt, who has spent much of her career battling Holocaust denial. She, too, noted that there's a spectrum of Holocaust denial, from those who deny it happened at all to others who try to minimize the number of deaths or the genocidal intentions of the Nazis.

A similar phenomenon occurs with anti-vaccination activists, as well. When speaking to one another, they tend to be more open about sharing their false belief that vaccines cause autism. But when their arguments are geared toward a more mainstream audience, they soften their rhetoric, claiming that they are just advocates for "personal choice" or "greener vaccinations."

The other strategy that Trump's lackeys have been employing has been to deny it really matters, one way or another, whether the president "believes" in climate change. (I've used scare quotes because I think the better phrase is "accepts the scientific consensus that climate change is happening and is caused by human activity.") This execrable crew is attempting to argue that this decision is simply about American interests and that questions about the future of the planet — on which the United States sits, like it or not — aren't really relevant.

"It’s interesting about all the discussions we had through the last several weeks have been focused on one singular issue: Is Paris good or not for this country?" Pruitt said during his Friday press conference. (I won't try to unscramble his grammar and syntax.) No matter how many times journalists asked about his relationship, or President Trump's, to the scientific facts, Pruitt wiggled away, insisting that such details don't much matter in the grand scheme of things.

Kellyanne Conway, presidential counselor, pulled the same stunt on ABC on Friday, treating environmental concerns as a side issue and arguing that the only relevant question is whether "the U.S. government should stay in an agreement that gives us too much of a financial burden."

I asked Cook about if it matters whether politicians accept or deny climate science, and he was quite clear: “Science denial does have political consequences," he said.

Cook pointed to last weekend's podcast episode of "Lovett or Leave It," during which host Jon Lovett riffed on the sheer silliness of this.

"I want to imagine a world where we're debating whether or not to send people to the Moon," Lovett said, mocking Pruitt's comments, "and half the people in the debate did not believe in the Moon. And then you turn to them and you say, 'Do you believe the Moon exists?' and they are like, 'That is an unrelated question.'"

These tactics might be even more dangerous than straightforward denials of scientific consensus. Blunt denials and conspiracy theories can be debunked relatively easily. Expressions of doubt, on the other hand, can be read as simple caution and a desire to withhold judgment until the evidence is in. But the problem is that in this case reality is clear: The evidence is in, and any suggestion to the contrary is just as much a lie as saying that climate change is all a big hoax.