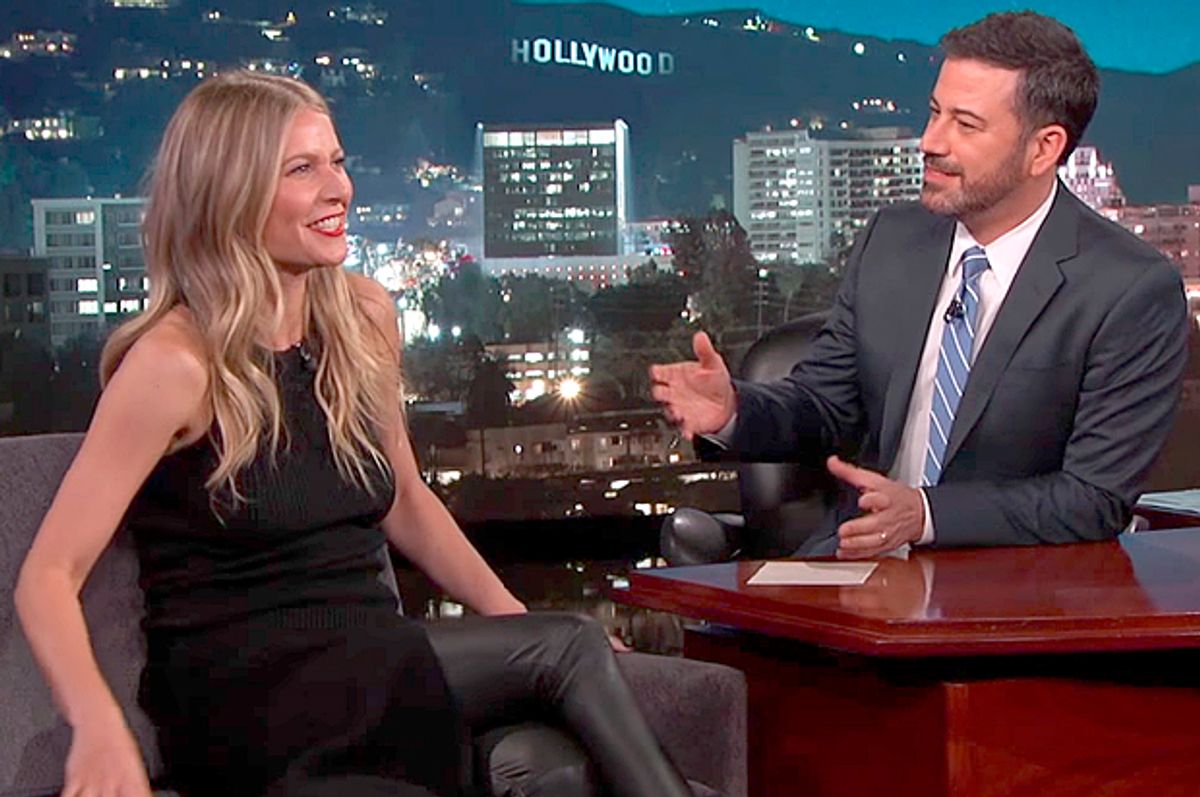 Back in 2008, the wellness queen herself, Gwyneth Paltrow, bestowed her personal brand of lifestyle, nutrition, parenting, fashion, wellness wisdom upon us plebes, in the form of Goop.

Goop is a cutesy, earthy, gluten-free website that started out as a weekly lifestyle newsletter and now has its own line of "essential wellness" products, like vitamins and Jade Eggs. Besides offering friendly tip like how to style denim jackets for spring or where to buy the latest culinary devices, the site also offers advice nobody asked for, like the best place to obtain a V-steam and how to get rid of scarring with bees.

It was these interesting tidbits that were the topic of conversation on Jimmy Kimmel's show on Monday night. The comedian did what he does best and put the world's most beautiful woman on the spot about Goop's most bizarre recommendations.

He started by asking her about "Earthing," the practice of walking around barefoot to absorb the Earth's energy through your feet.

"So, Earthing — I don’t actually know that much about Earthing," Paltrow admitted. "It came out of me not knowing anything about Earthing but hearing about it. They say that we lost touch with sort of being barefoot in the earth, and there’s some sort of electromagnetic thing that we’re missing. It’s good to take your shoes off and walk in the grass."

Paltrow stumbled through her explanation before finally throwing her hands up in defeat.

"I don't know what the fuck we talk about!" she said, laughing.

She went on to admit that there are pieces of advice on the website she's never read and remedies that she advertises but has never tried herself. She and Kimmel brushed it off as a joke, but the fact that Gwyneth has been touting Goop as her "full-time job" and seems to know nothing about her products is an idea that seems eerily familiar.

Gwyneth's Goop goof and Ivanka's hypocrisy not only highlight the public's obsession with scooping up anything that these successful blonde Hollywood hot moms pedal to the masses, but they also show just how dangerous they can be.

Paltrow has come under fire for ingredients and advice she's shared before, but her site still gets millions of views a month. It's a dangerous gamble, given that Goop quite literally positions itself between women and their doctors, asking them to put things in their bodies that may actually do more harm than good.

That the person who provides authenticity and authority to the site's various claims can't even bring herself to offer a reasoned, honest defense of them — or even understand them — speaks to a titanic level of privilege, elitism and blithe irresponsibility. "Trust me," Goop said. "I can't bother myself to care," said the Golden Goddess. Despite handing over their faith — and money — readers are on their own.

Ivanka's antics have been almost as publicized as her father's, and yet she's still got people clamoring to find her discontinued handbags online. Again, her claims of understanding what women go through in the professional workspace and her self-professed mission to lift them up are overshadowed by their real-world effects. Her complicity in her father's policies and her shallow understanding of on-the-ground reality don't help her much either. By positioning herself as a force for women, or as the potential liberal secret weapon, her followers forget who she really is — a deceptive spokesmodel for shoes and regressive agendas.

It seems that with these two, so long as you're hot and in power, the public will keep coming back for more. What's worse, you don't even have to pretend to believe what you espouse. Flash that smile, and all will be forgiven.

There is one small hope for us plebes, however. These women make a living by telling normal people how to live their lives. But when it comes to living by their own advice, they fail miserably.