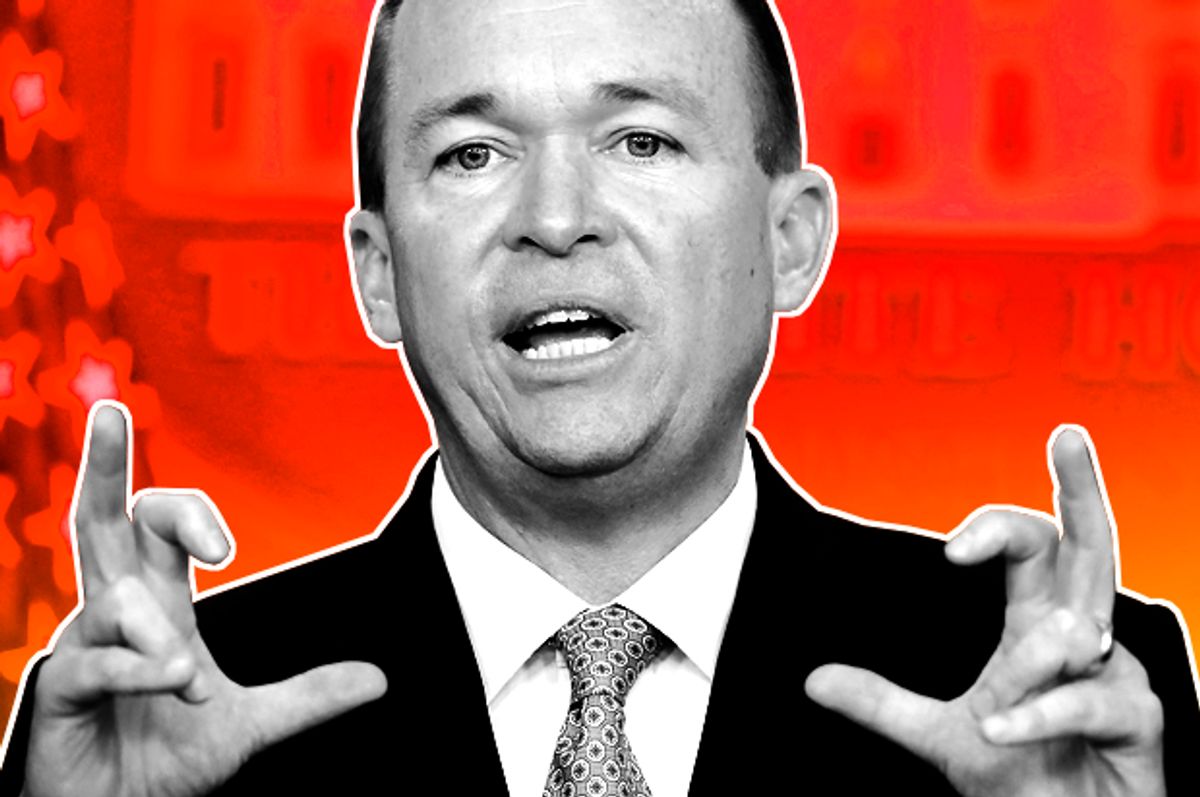 In its zeal to trot out the most mendacious humans alive to defend the president and his policies, the Trump administration has recently turned to Mick Mulvaney. A haircut in search of a decent suit, Mulvaney serves as the director of the Office of Management and Budget. Before that, he was known mostly to political junkies as a backbench Tea Party congressman from South Carolina.

Now that he works for Donald Trump, Mulvaney is quickly becoming the latest in a long line of exhibits for how completely the Republican Party has turned itself over to charlatans who spent their youth sleeping through math class.

About 10 days ago, Mulvaney stood in front of the White House press corps and the nation to defend the president’s draconian budget with a $2 trillion counting error at its heart. Last week having apparently not embarrassed himself enough, he resurfaced with an interview at the Washington Examiner to take potshots at the nonpartisan Congressional Budget Office for reaching conclusions he does not like about his work.

It is important to note that Mulvaney did not challenge the budget office on the merits of its work, such as its score of the American Health Care Act recently passed by the House of Representatives. What he did instead is cast doubt on the motives of the people who work for and run the office, hinting without providing a lick of evidence that they are a bunch of partisans out to sandbag a Republican administration.

Mulvaney explicitly took issue with the budget office’s assertion that the AHCA’s $900 billion in cuts to Medicaid will result in fewer people having health coverage through Medicaid. Those of us familiar with the concept of cause and effect might think this obvious. But not Mulvaney. Since kicking off the rolls Medicaid users, who tend to be poor and old and have disabilities, makes the GOP look like Ebenezer Scrooge’s meaner cousin, he deflected by suggesting it is no longer “feasible” to think of the Congressional Budget Office “as a nonpartisan organization.”

He went on to feed conservative paranoia by suggesting that the person in charge of scoring the AHCA had also scored Hillary Clinton’s health care plan in the early 1990s and the Affordable Care Act early in the Obama administration, with the clear implication that the AHCA’s bad score was the result of liberal sabotage. (For what it’s worth, the budget office’s score of the ACA was fairly accurate, while its unfavorable score of the so-called Hillarycare proposal helped sink that plan in Congress.)

The clear message is this: The anti-Trumpian swamp or the "deep state," or whatever Trump’s most fervent supporters are calling Washington these days, is lying to make the AHCA and the administration look bad.

In dismissing facts and figures as out of hand, Mulvaney is staying true to his roots as a member of the Tea Party and the House Freedom Caucus, having aligned himself with both when he entered Congress after the 2010 election. He was one of the congressmen who, in 2013, dismissed the warnings of virtually every economist and financial wonk about the dangers of not raising the debt ceiling as arrant nonsense and fearmongering. This led to a government shutdown and the nation's near default on its debt, a potentially catastrophic blow to the world’s economy.

The intransigence of Mulvaney and his fellow Tea Partiers for a while led to their being forced to the sidelines by the Republican leadership in the House. Instead, former Speaker John Boehner and later his replacement Paul Ryan started making deals with Democrats on the debt ceiling. That was fine in terms of at least keeping the government open and functioning — and not ending up in catastrophe for the millions of people who depend on it for their livelihoods and health care.

But now, with Tea Party true believers like Mulvaney holding high positions in the administration, the group’s nonsense that could be intermittently checked during the Obama era has invaded the executive branch. And it has a president who is extremely malleable, who is inclined by his nature toward cruelty and who, like Mulvaney, is happy to blow up the public trust in political institutions in order to serve his own partisan ends, no matter how divorced from reality they may be.

Add to that the GOP's control of Congress that has allowed both the House and Senate caucuses to unleash their inner Ayn Rand, and you have a very dangerous moment in American history, as last week's pullout from the Paris climate accord by the president shows. The Tea Party itself might have seemed beaten for a couple of years. But its intransigence and know-nothingism is now driving the car and could steer the entire country off a cliff.