Oliver Stone's "The Putin Interviews" is a litmus test for progressives 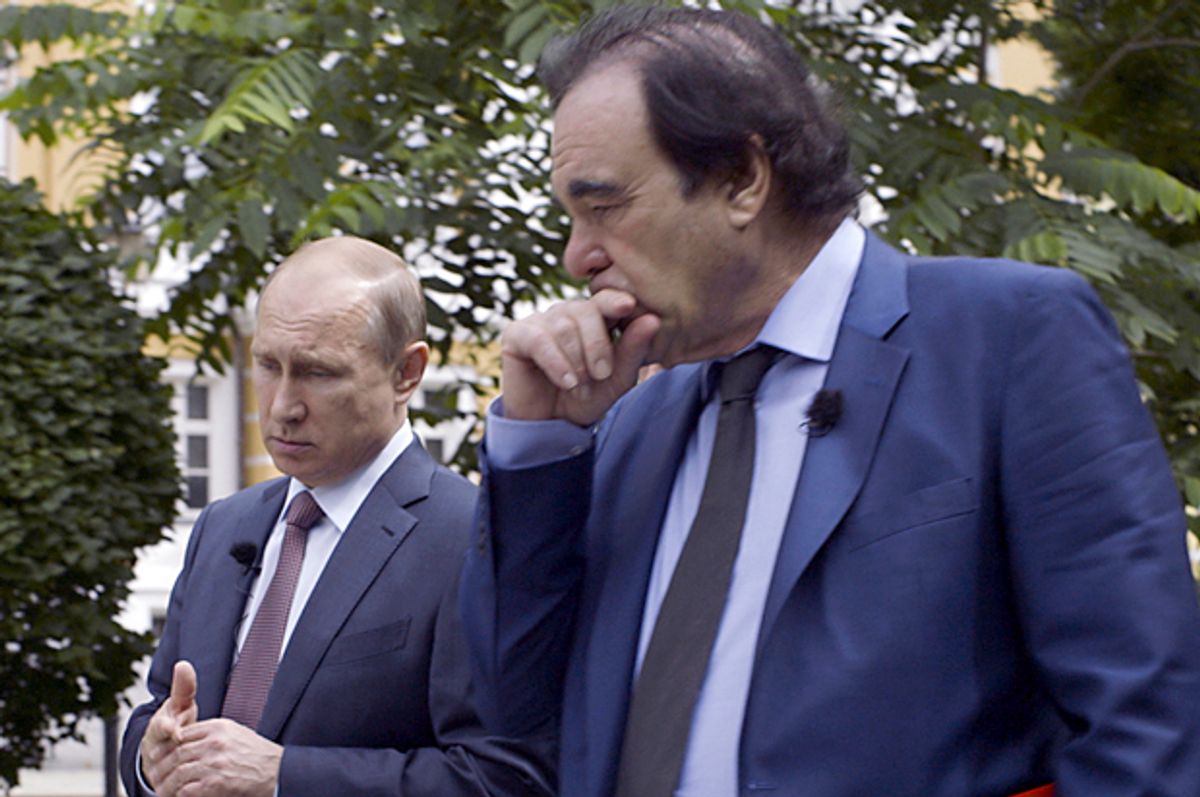 Vladimir Putin and Oliver Stone in "The Putin Interviews" (Showtime)
--

Even before critics had a chance to see Oliver Stone's new documentary — a series of in-depth interviews with Russian President Vladimir Putin airing on Showtime  there were plenty of signs that the director would be uncomfortably sympathetic to his authoritarian subject.

If nothing else, Stone's track record of borderline-obsequious documentaries about past dictators (Cuba's Fidel Castro and Venezuela's Hugo Chavez) strongly suggests that the director has a soft spot for repressive regimes.

Now that reviews of "The Putin Interviews" are starting to leak out, it's becoming quite clear that those fears were justified.

That said, there are two moments in "The Putin Interviews" that raise questions extending far beyond Stone himself.

There are a number of people on the far left who are willing to apologize for Putin, either as a reflexive response to their ideological disdain for the American military-industrial complex, misplaced concern about being perceived as McCarthyist or because carrying water for Putin is necessary in order to justify many of the actions of Wikileaks founder Julian Assange.

Apparently, "The Putin Interviews" inadvertently illuminates why any defense of Putin makes these people, for lack of a better term, phony liberals.

The first incident occurs when Putin tells Stone that he's never had an off day as president because he's not a woman. Putin's exact words to Stone were "I am not a woman, so I don’t have bad days. I am not trying to insult anyone. That’s just the nature of things. There are certain natural cycles," according to a report by Bloomberg.

The second problematic moment occurs when Stone asks Putin about his 2013 law outlawing what they described as "gay propaganda" to minors. After insisting that Russia does not discriminate by homosexuals because their laws aren't as restrictive as those in many Muslim countries, Putin admits that he wouldn't shower with a homosexual man because, "Why provoke him? But you know, I’m a judo master."

These aren't just reactionary comments by a man whose prejudices include the idea that women can't control their emotions when they menstruate and that homosexual men might prey on other naked men in a shower. They are hardened views manifested in Russian policy under the Putin regime, from a law that partially decriminalized domestic abuse to the abuse of gay men in Chechnya (as well as the aforementioned 2013 law).

What's more, while Putin's alleged preference for Donald Trump over Hillary Clinton may not have been solely motivated by the latter's gender, it isn't exactly a coincidence that he forged an alliance with both a misogynistic presidential candidate and a misogynistic publisher in order to take her down.

What we have in "The Putin Interviews" is more than just the latest effort by a past-his-prime director to ingratiate himself to political strongmen. It is, on a deeper level, a litmus test for all of the far leftists like Stone whose knee-jerk impulses override their ability to feel compassion for historically marginalized groups.

In other words: If you are willing to defend Putin, or Stone and Assange or any of the others who carry water for the Russian president, you are not a true liberal.

Or a good person for that matter.