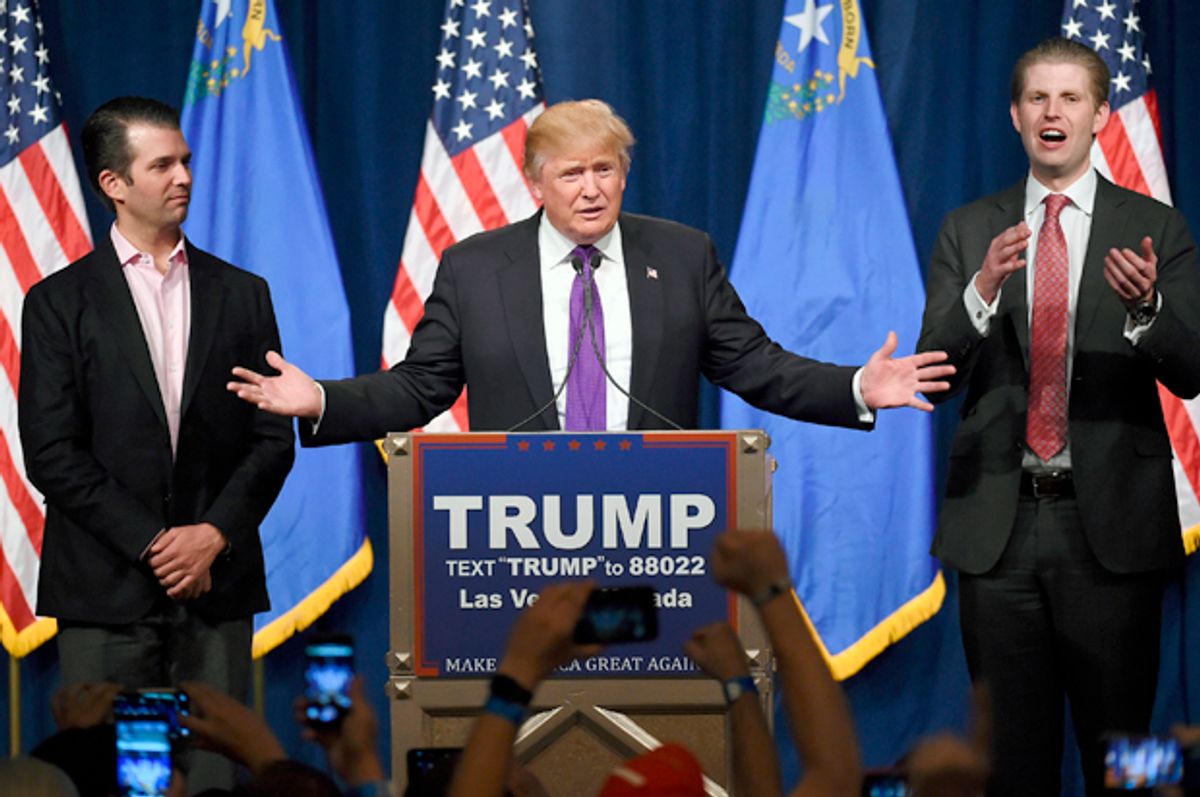 Eric Trump and his brother Donald Trump Jr. are looking to cash in on their father's presidency, and they'll be doing so with their creation of a new three-star hotel chain. Branded "American Idea," the Trump Organization's newest venture will consist of patriotic-themed affordable hotels — perfect for the white working class President Donald Trump theoretically appealed to on the campaign trail. However many questions surrounding Trump's potential conflicts of interest still remain, and experts have expressed constitutional as well as tax policy concerns because of the close-knit relationship between the Trump Organization and the Oval Office — especially after the recent revelation that the president has been discussing profit reports with his sons, according to multiple news reports.

The chain will debut with three hotels in Mississippi, a state President Donald Trump won by 18 percentage points, according to the New York Times. But Eric Danziger, the chief executive of the Trump Organization's hotels division insists the business model has nothing to do with politics.

"There is no political thought to it," Danziger told the Times. "The reality is we should have something in those kinds of locations." Danziger also said that there could be "many hundreds" of American Idea hotels throughout the country in both red and blue counties, as well as states.

Salon spoke with Norm Eisen, former U.S. Ambassador to the Czech Republic as well as the former ethics czar under President Barack Obama, who said that Trump's sons are using "their father's public office for the family's private gain" which he notes is "kind of the opposite of the actual American Idea." Eisen added that there were "huge" instances of conflicts of interest at play.

"One of the greatest concerns that the founders had, was that a president would prefer certain states over others. This appears to be an expression of that preference," Eisen explained in a phone interview with Salon. "It raises constitutional questions because the domestic emoluments clause doesn't permit a president to receive any compensation from the states over and above his federal salary. Well, here, these hotels are going to be receiving all kinds of benefits; discretionary permits, tax breaks, subsidies."

Eisen, who is now a fellow at the non-partisan Brookings Institution think tank, also explained that because the president "has held onto his ownership interest in the Trump Organization, he's going to be getting those forbidden emoluments — those forbidden state-cash or other benefits."

On Monday the Wall Street Journal reported that the president's Washington hotel received approximately $270,000 "in payments linked to Saudi Arabia as part of a lobbying campaign by the Gulf kingdom against controversial terrorism legislation last year."

In an interview on ABC's "Good Morning America" Trump's son, Eric, stated that he discusses profit reports with his father, but has insisted that it doesn't "blur the lines."

"You’re allowed to show that and remember the president of the United States has zero conflicts of interests."

"Their [Trump's] motto seems to be 'ask not what you can do for you country, ask what your country can do for you' — it's absolutely outrageous," he explained.

When asked about his thoughts of Trump's sons discussing profit reports with their father, Eisen said: "The Trump's promise that they would keep distance between the public business of the president and the private affairs of the family — I and other bipartisan experts at the time said it's a sham and every new revelation that they've come out with proves that."

"It's not just that Donald Trump is hanging onto the ownership of his business interests — which is unprecedented and goes against what presidents of both parties have done for decades, uniformly — he's continuing to manage it," he explained. "Does anybody really believe that when Eric Trump meets with him and they discuss the business, and he shows him the profit reports, that the father doesn't provide any feedback to him of any kind whatsoever?"

"Every American should be alarmed at this abuse of the 'American Idea.'"