Can we finally kill off the zombie lie? Trump's voters mostly weren't the "white working class"

Most of Trump's voters were middle-class or rich. Can we stop with all the bogus anthropology about Trumplandia? 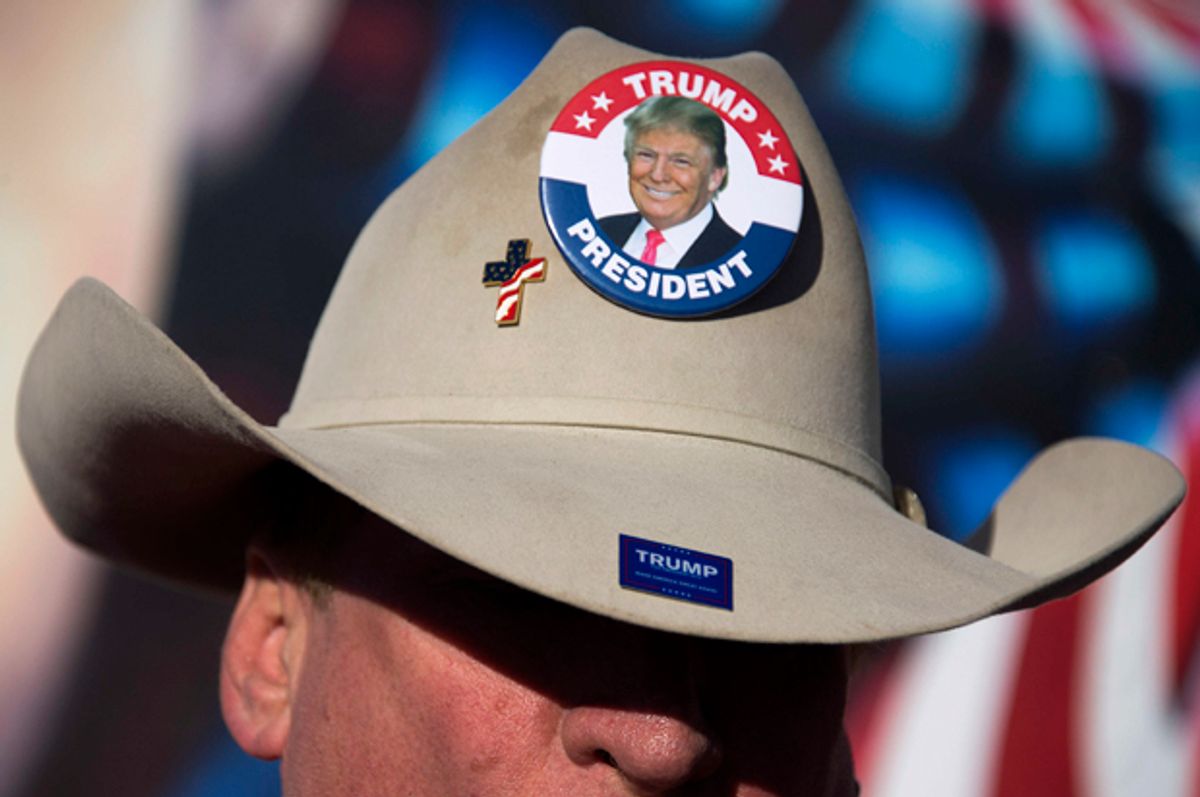 The 2016 presidential campaign between Donald Trump and Hillary Clinton gave birth to many narratives that were (and remain) very much in search of facts.

The corporate news media believed (or claimed to) that Trump would eventually normalize his behavior and become "presidential." This did not happen during the campaign. Nor did such a transformation take place upon his inauguration.

Trump was also supposed to "pivot" in order to expand his base of support among the American people. He was also supposed to moderate his behavior in order to win over more "centrist" Republicans. Instead, Trump is focusing entirely on his core supporters and has no interest in winning over other Americans. The Republican Party's leaders and representatives largely support Donald Trump's agenda. They have made a political suicide pact with him.

There were voices within the American corporate news media that argued that Donald Trump's election supposedly represented a populist "uprising." In reality, Trump won because of a statistical fluke and low-voter turnout. This dynamic was aided and abetted by foreign interference from President Vladimir Putin of Russia and his spies.

Many in the mainstream news media said that fears about Donald Trump as a potential fascist or authoritarian were paranoid and exaggerated, perhaps evidence of some type of "derangement." They believed that America was a democracy with strong and enduring political institutions that would prevent such a poisonous plant from taking hold and blossoming. Donald Trump's personal behavior and public policies have proved them wrong. He is a plutocratic authoritarian.

And of course there was the narrative that Donald Trump's success in the Republican primaries and eventual victory over the Democratic nominee, Hillary Clinton, were fueled by "economic anxiety" on the part of the "white working class."

This is a zombie idea that needs to die. As I have repeatedly shown in a series of essays and interviews for Salon, public opinion and other research clearly indicates that it was a combination of white racial resentment, old-fashioned racism and sexism as opposed to some vague type of "economic insecurity" that motivated Trump's voters.

New polling data from the American National Election Study has provided even more ammunition to finally kill off this argument. As detailed by Nicholas Carnes and Noam Lupu of The Washington Post, the white working-class comprised only 25 percent of his voters.

Trump’s voters weren’t overwhelmingly poor. In the general election, like the primary, about two thirds of Trump supporters came from the better-off half of the economy. . . .

To look at it another way, among white people without college degrees who voted for Trump, nearly 60 percent were in the top half of the income distribution. In fact, one in five white Trump voters without a college degree had a household income over $100,000. . . .

In short, the narrative that attributes Trump’s victory to a “coalition of mostly blue-collar white and working-class voters” just doesn’t square with the 2016 election data. According to the election study, white non-Hispanic voters without college degrees making below the median household income made up only 25 percent of Trump voters. That’s a far cry from the working-class-fueled victory many journalists have imagined.

The mainstream corporate news media had many spectacular failures during the 2016 presidential campaign. Its old rules of "balance," "fairness" and "objectivity" were proved obsolete when faced with a performance artist and professional liar who possesses no respect for democracy.

But mainstream American media's greatest failure perhaps was its deep faith in the general goodness and benign nature of White America. This rendered it unable to accept the fact that many tens of millions of white Americans would vote into the country's highest office an overt racist, misogynist, nativist and authoritarian.

To prevent similar mistakes in reporting and analysis from happening again, I propose the following solution.

Instead of sending journalists into the hinterlands of "Trumplandia" to write anthropology-lite profiles of the strange, odd and primitive people who inhabit such spaces, the corporate news media could work much closer to home, in blue-state America. By doing so, they would learn much about what really happened in the 2016 presidential election – and also gain insight into the future of politics in the United States.

For example, journalists could ask their peers and family members if they voted for Donald Trump. The Washington Post and The New York Times could also dispatch reporters to Wall Street, the suburbs of northern Virginia, Silicon Valley or Chicago's Gold Coast to write in-depth profiles of the people who live and work in those communities. Students and faculty members at the country's elite universities and colleges could also be polled and interviewed about their racial attitudes and level of support for Donald Trump.

Some people will lie because Trump is unpopular. Others are "backstage" racists who will deny voting for Trump out of a fear of social condemnation. But if asked the right questions by the right interviewer and assured of anonymity and privacy, many Trump voters from these places may very well reveal their true and deeply held feelings. Rest assured, there will be middle-class, upper-class and rich white folks who will be unapologetic about their support of Donald Trump. They are the true "silent majority" among Trump voters.

The enduring power of the "white working class" zombie lie signals to the larger cultural and political failings in American society that made the election of Trump possible. It was America's elites — in the news media, banking and finance, academia, religion, the corporate world and the political class more broadly — who helped to create the circumstances that made Trump's election possible. In all, it is easier to blame the stereotypical uneducated and unsophisticated "white working class" voter in Rust Belt America for the crisis that is Donald Trump's presidency than it is to indict members of one's own peer group.

Several months after Election Day, I met up with a good friend whom I had not seen in person for several years. Through hard work, intelligence and good fortune he rose from his middle-class origins to become a member of the American upper class. He is a liberal voter in a very conservative part of the country. We talked about Donald Trump's victory. He explained to me that his peers and colleagues voted for Trump because of either a single-minded obsession with taking away women's reproductive rights or a desire to pay even lower taxes than they did already. Several of his peers are Republicans who would vote for anyone the party nominated, regardless of how incompetent and awful that candidate may be. My friend happens to be white. I am black. His colleagues and peers would likely tell him things they would never personally admit to me.

Ultimately, The Washington Post's recent piece on the fragile and unsustainable "white working class" myth in the 2016 presidential election is valuable. But it only confirms what should have been obvious — if  members of the corporate news media had dared to challenge their own lazy assumptions about American politics and society.