Taking credit for a crisis in the Arab world that may have been caused by Russian fake news — it's so Trump! 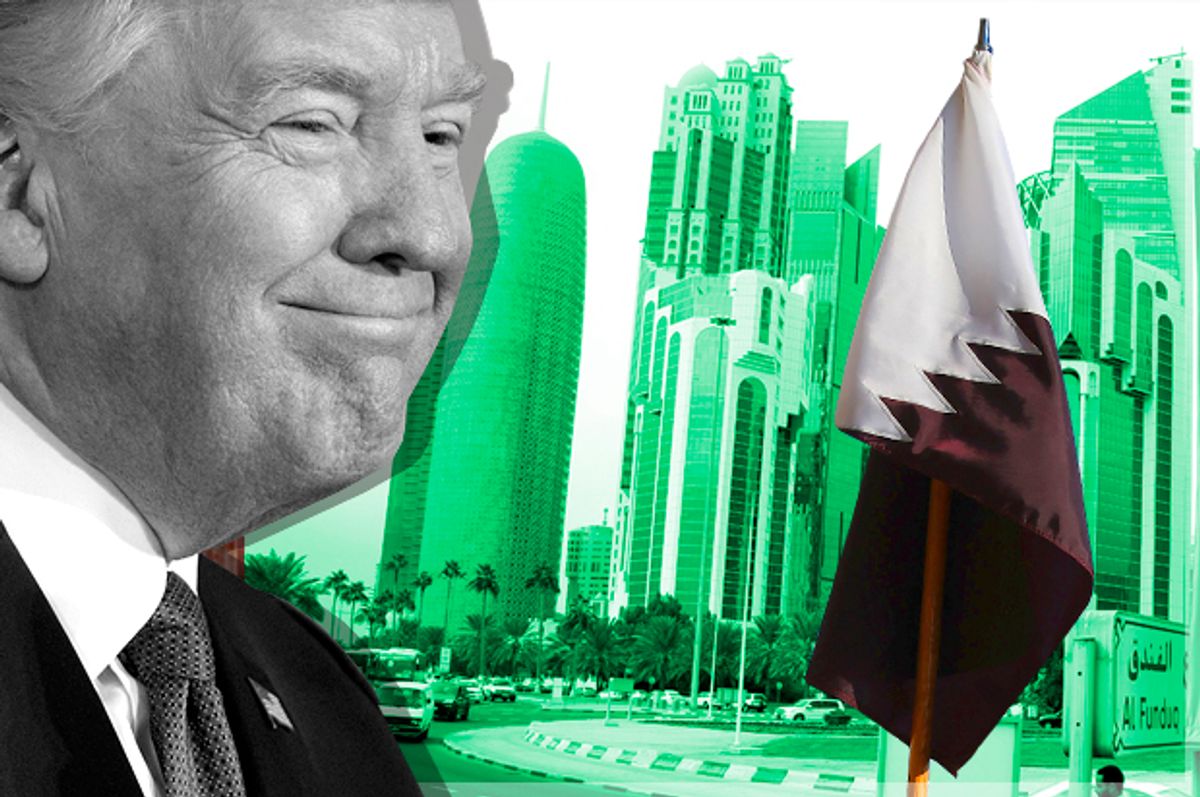 One reason it's important to have a president who is capable of reading foreign policy briefing books and listening to experts is not just because those things increase their understanding of world affairs. It's also vital because they can offer a sense of caution and context to inform a president's words and actions on the world stage. For the most part our presidents have taken this aspect of the job very seriously.

There are exceptions. Recall that on Aug. 6, 2001, George W. Bush told his national security briefer, “All right, you’ve covered your ass now” after he was told that that Osama bin Laden was "determined to strike inside the United States." And then he went fishing. We know how that worked out.

From what we hear, President Donald Trump is even less interested. Just before he took office he told Fox News' Chris Wallace, "I'm, like, a smart person. I don't have to be told the same thing in the same words every single day for the next eight years." We know he gets at least some briefings these days because he was able to spill the beans about top-secret Israeli intelligence to the Russian ambassador.

Reuters has reported that Trump has a very short attention span and requires all briefing memos to be a single page and accompanied by visual aids. His advisers have found that if they put his name in as many paragraphs as possible they can entice him to read the whole thing.

Trump's foreign trip made it obvious that he is way in over his head. There were lots of great visuals on the Saudi leg of the trip with everyone sword dancing and clutching glowing orbs. Conservative media outlets swooned, portraying the trip as a major breakthrough as Trump singlehandedly ended all bad blood among former rivals and brought the region together in peace and harmony. (Well, except for Iran, which all parties have agreed to hate.)

He didn't give any press conferences but he did give some speeches, which were notable for what they didn't say rather than what they did. In Saudi Arabia he didn't mention human rights and at NATO headquarters he purposefully refused to endorse Article 5, the mutual defense pact at the heart of the alliance.

In the Middle East, he sounded like a used car salesman trying to move surplus vehicles off the back lot with statements such as this one to the emir of Qatar, Sheikh Tamim bin Hamad Al Thani:

We are friends, we’ve been friends for a long time now, haven’t we? Our relationship is extremely good, we have some very serious discussions right now going on, and one of the things that we will discuss is the purchase of lots of beautiful military equipment, because nobody makes it like the United States. And for us, that means jobs, and it also means frankly great security back here, which we want.

Imagine the emir's surprise when he read these statements from Donald Trump on Tuesday:

Those were the first public statements made by the president of the United States addressing the fact that Bahrain, Saudi Arabia, the United Arab Emirates and Egypt  —  as well as the Saudi-backed government in Yemen, the Emirati-backed government in eastern Libya and the Maldives  — suspended economic and diplomatic relations with Qatar. That happened on Monday, ostensibly over Qatar's alleged support for Iran and terrorist organizations.

Always eager to pat himself on the back, Trump took credit for this crisis but seemed to not recall that on his trip he called Qatar a crucial strategic partner — which it is, since it hosts the regional headquarters of U.S. Central Command and tens of thousands of American troops are on the ground there. Trump's suggestion that the U.S. may also break with Qatar could point toward an enormous military and strategic upheaval.
dAs usual, the president didn't seem to have consulted with anyone before he issued his startling statements. The Pentagon praised Qatar for its "contribution to the security of the region" and for hosting the U.S. military and had no answer to the question of what in the world Trump was talking about.The ambassador to Qatar took to Twitter to reassure the world that the U.S. was still an ally. Secretary of State Rex Tillerson urged the parties to sit down and try to work things out.

If Trump were able to keep his attention on the topic for longer than a couple of minutes, he might have learned that the disputes among these countries are far more complicated than Qatar's support for terrorism. (Saudi Arabia is hardly one to talk.) An article in The Washington Post, published a few days before the announcement that these countries were cutting ties with Qatar, explained the underlying conflict in some detail.

What is clear is that while Trump may have little understanding of the issues at stake, the players see a shift from the Barack Obama administration's policy of working with the Gulf Cooperation Council (Bahrain, Kuwait, Oman, Qatar, Saudi Arabia and the United Arab Emirates) as a coalition toward a focus on just Saudi Arabia and United Arab Emirates. This is apparently based in large part on Jared Kushner's personal relationships with leaders of those two countries. They are taking advantage of the opening that Trump has presented to change the balance of power in the region.

The twist on the story is that this crisis was predicated on an alleged statement attributed to Qatar’s Sheikh Tamim on May 23 in which he supposedly praised Hamas and called Iran “a big power in the stabilization of the region.” On Tuesday CNN reported that U.S. investigators now suspect that was literally a fake news report, planted by Russian hackers on Qatar's state news agency.

President Trump is the man who said the Israeli-Palestinian issue is "something that I think is frankly maybe not as difficult as people have thought over the years" and that "nobody knew that health care could be so complicated." So we know he tends to see the world in extremely simple terms. It's too much to expect that he will ever be able to understand the complexity of relationships between nations of the Middle East. But it really isn't too much to ask that he not make ignorant and unfounded statements on Twitter about such important issues. One of these days it could be fatal.