Death of the British left? With Theresa May facing disaster, it suddenly doesn't look that way

Theresa May's cynical, incompetent Conservatives are in trouble, and the British election could rock the world 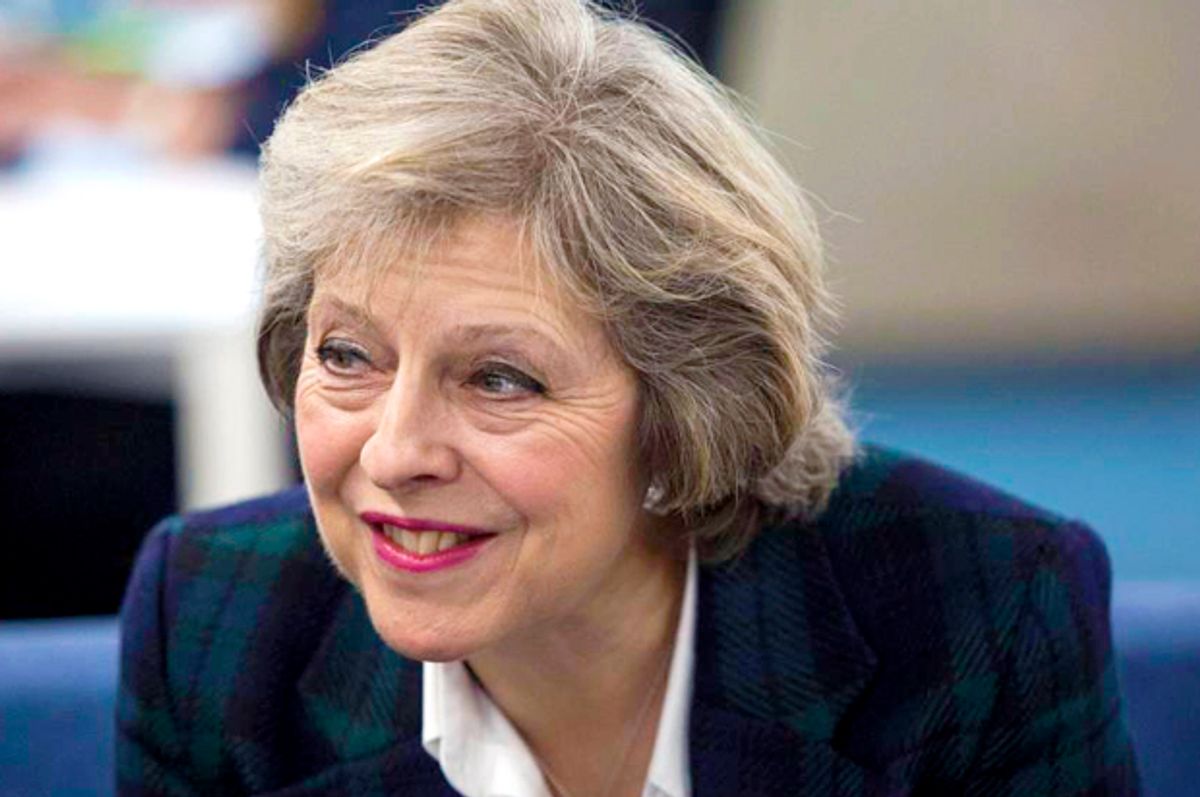 Reports of the death of the British left have been exaggerated. Thursday's general election in the U.K. is now Prime Minister Theresa May's to lose. Even if she hangs onto a majority in Parliament, May will have harmed the Conservative Party with career-curtailing consequences. It turns out that promising stability when you're standing pulling faces atop a teetering Jenga tower of socioeconomic calamity is not a winning strategy. It turns out that people actually rather like the idea of not dying in poverty because Diet Maggie Thatcher claims it's character building. It turns out that nothing is certain in British politics anymore and actually that's rather exciting.

Six weeks ago after this cynical and opportunistic election was called, I wrote a Salon article predicting a massive Tory power grab and the subsequent collapse of the Labour Party. Almost everyone predicted the same thing, including the prime minister herself — which is why she called the election in the first place, after promising the opposite for six months. She was wrong. I was wrong. I've rarely been so glad to be so mistaken.

In a shocking plot twist, at this election people's votes — especially young people's votes — are truly going to matter. Our electoral system is unfit for the purpose, and everyone knows it: It's a broken, rigged, "first past the post," winner-takes-all derby designed to create elective dictatorships and ensure that voting with one's conscience is all but impossible. That's how the Conservatives have stayed in power for eight years: By relying on a divided left and a strategy of gerrymandering to ensure that even though everyone hates them and that only a minority vote for them, they still represent just about the largest single party. In most other democracies they'd stand no chance. They've made the mistake of thinking that because they keep winning power —narrowly, duplicitously and by default — that means they deserve it. Wrong again.

"Strong and Stable," May's campaign slogan, was a terrible pick. It's an obvious lie, both personally and politically: The Tories are neither; they've made the nation weaker and wobblier and more messed up than we could have imagined — and again everyone knows it. Now you can get away with any number of obvious lies for a long time if you have the sheer pig-fancying entitlement to simply brazen it out, blame the other guy and stroll into power like you already own the place. Indeed, that's been most of the Tory electoral strategy since 2009.

Unfortunately for them, it doesn't work forever. People will eventually twig that you've no idea what the hell you're doing — especially if you put up a leader with all the charisma of a cheese sandwich that’s been in the freezer since 1979. Theresa May is cosplaying Margaret Thatcher and doing it badly. She has neither the cunning nor the sheer animal smarts for the job she's wangled herself into. She has far fewer resources and almost no personal magnetism — a knackered human credit card overdrawn on the bank of political goodwill.

The Tories haven't just fucked up this election. They've fucked up the country, mercilessly and for eight long years, and people are sick of them. In less than two terms, they have destroyed the welfare state; almost bankrupted our health service and school system; plunged millions of children into poverty; presided over an enormous uptick in racism, social division and terrorist violence; almost lost Scotland; utterly failed to balance the nation's finances; and sent us spinning out of the European Union into the maw of decades of uncertainty, recession and fear. Racists are running brave in the streets. Food banks are the new normal. Millions of people are languishing in exhausting, low-paid work. People with disabilities are dying in their homes. School buildings are rotting. The mental health system is close to collapse. Young people have given up hope of starting families. People are poor, angry and scared.

That's what the Brexit vote was about in the first place. Desperate people saw an opportunity to stick it to a bunch of bloodless toffs and really ruin the Tories' day.

A lot of us are finally realizing what a dreadful decision that was, and nothing throws the British into such a weird rage as being wrong in public. What we need now is somebody levelheaded to pull us through the Brexit negotiations with the least possible pain, and Theresa May manifestly has no operational mode other than glaring at you to sit down and be quiet.

The mistake the British Conservatives always make is underestimating quite how much they are hated. Often that doesn't matter because Britain has a long tradition of electing people who are despised because they seem like the sort of entitled stuffed suits who ought to be running the country because they always have. That doesn’t work forever. Who knows, at this stage, if it’ll ever work again.

The opposition Labour Party, meanwhile, has surprised us all by playing an absolute blinder. Everyone’s favorite beardy socialist uncle, Jeremy Corbyn, and his party produced a hopeful and sensible manifesto — "For the many, not the few" — which almost everybody seems to love. They want to put billions back into the National Health Service, scrap university tuition fees, build schools and houses, end punitive welfare testing and generally try to make life a little bit easier for everyone who hasn't got an offshore bank account and a standing table at Chequers. The Tories want to freeze pensioners in their beds and murder foxes. That's about it.

The Conservative case against Corbyn has always gone something like this: He will ruin our foreign policy and take us crawling to the feet of dictators. He will jeopardize peace in Northern Ireland and destabilize the Union. He will embarrass us on television, tank the pound and hold hands with maniacs who won’t hesitate to sell us out to the Russians. Even if any of this is true, May and her party have already done all of it and more — and they don’t even have socialism as an excuse nor the selling point of being affable, squashed-looking idealists who make jam on the weekends. Half my hometown has been flogged to Moscow and Doha already. At this stage I’d vote for anyone who plans to use the proceeds to fund a few clinics rather than another pile of flesh-melting cluster bombs. Hurrah for democracy.

It’s hard to imagine a party leader going into an election looking more catastrophic than May does right now, and the fact that she might still scrape out a victory is nothing but an indictment of the unfitness of Britain's electoral process. May, who was home secretary under Cameron (in a powerful domestic policy position with no precise American equivalent) and whose flagship policy before stumbling into the premiership was a bright idea to send vans with racist billboards around the inner cities to scare foreigners, is full of the usual Tory bluster and bigotry without any of the usual charm. She has refused to speak to members of the public for the entirety of a general election campaign that she called. She has refused to debate her opponents. She is easily flustered and loses her cool whenever she is mildly heckled.

There was once a time when British people trudged to the polls to decide whether we preferred the evil candidate or the rubbish one. This may be the only national dilemma Theresa May has managed to solve.

Britain is making a choice on Thursday. It may not be a perfect choice, but it’s a real choice, and it’ll resonate around the world. Any result that isn’t a decisive Tory victory will be a failure for May and her minions and send the message that you can’t just cut people to the bone, keep on cutting, crash the state into a wall and demand a gold throne to sit on. You can’t simply ignore poor and working people forever nor fob them off with empty racist rhetoric. Most important: There is an alternative. There always has been. There’s more than one way to turn away from centrist neoliberal stagnation. There’s a progressive people’s fightback brewing, and it’s closer to victory than anyone dared to hope. If you're in Britain, go out and vote. If you're not, watch us and see what happens.