"Queen of the South" and "Claws": Sometimes bad can be very, very good

It's hard out there for a queen, whether she's at the head of a cartel or running a nail salon 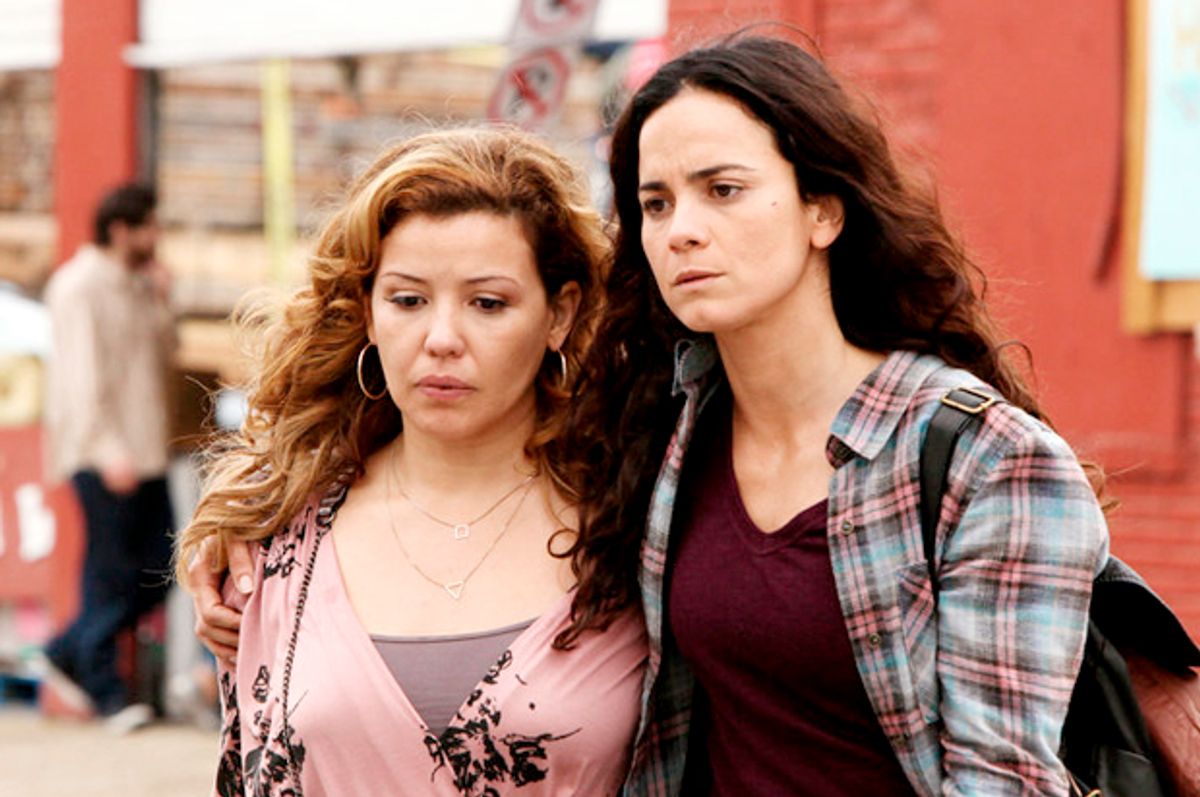 Cersei Lannister is television’s most fearsome ruler. When “Game of Thrones” returns to HBO in July, she’ll be sitting on the Iron Throne, comfortably expecting to crush all who would challenge her right to it. That much is made manifest in the sixth season, when men attempt to pry her from her quarters against her will, giving her the option of peaceful surrender or violent struggle.

“I choose violence,” Cersei responds in a voice smoother than a cup of Arbor Gold, proceeding to watch with calm satisfaction as her gigantic lich of a guardian rips a man’s head off with his bare hands. That moment is apotheosis of this woman defining her relationship to the world and its relationship to her. To paraphrase a different prestige drama, when threatening men come knocking on Cersei’s door, she sets them straight: she is the one who knocks, not them.

Rare are the female characters who are as daunting as this “Game of Throne” archvillain, although USA’s “Queen of the South” appears to be mounting a campaign to produce its own in Dona Camila Vargas (Veronica Falcon), the estranged wife of a cartel kingpin turned governor (Joaquim de Almeida). Almeida’s Epifanio Vargas wants to turn the family's drug empire in a political dynasty and expects Camila to join him in the governor’s mansion and play the part of the smiling, supportive spouse.

But for the entirety of the show's first season Camila loudly denies him. She built their wealth, after all, and has no intention of subsuming her desire for power because her mate’s aspirations have changed. And an exchange in Thursday’s second season premiere, airing at 10 p.m., echoes the “Game of Thrones” moment described above. When Epifanio gives Camila the same option offered to Cersei, Veronica gently kisses her man on the cheek and purrs her choice. It’s war.

Scoff as one might at the comparison between HBO’s crown jewel and an Americanized telenovela airing on basic cable, both series are powered by the basic mechanics of soap opera. “Queen of the South” simply makes no pretense about it.

Adapted from the Telemundo telenovela “La Reina del Sur” and a novel by Arturo Pérez-Reverte, the first season of the USA series took knocks from critics for hewing too closely to the Spanish-language format’s penchant for melodrama and breathlessness. In truth, some of the soapier elements of the series could have been truncated to better focus on Alice Braga’s dynamic Teresa Mendoza, the low-level street dealer who is suddenly thrust into the high-stakes world of the cartels.

Less certain of its identity is TNT’s new series “Claws,” which premieres Sunday at 9 p.m. and places the owner of a nail salon, played by Niecy Nash, in the position of possibly playing queen pin. But like “Queen of the South,” the scrappy drama depicts women who are poor, or who used to be, fighting to be taken seriously in criminal underworlds run by men who would prefer that females know their place.

If Camila is far more of a battle-hardened strategist than Nash’s Desna, it is because the unforgiving world of “Queen of the South” demands it. The main focus of the USA series is on Braga’s Teresa, introduced by season 1's showrunner Scott Rosenbaum as a combination of scrappy survivor and woman in peril.

The very first scene of the series reveals that Teresa is destined to be the empress of the biggest drug empire in the Western Hemisphere. Before that, however, series writers M.A. Fortin and Joshua John Miller have depicted her rape by one of Epifanio’s thugs which, in a very “I Spit on Your Grave” moment, she cuts short by shooting him in the face. All this occurs in the show’s frenetic premiere. From there “Queen of the South” circuitously chronicles Teresa’s journey from being a nobody on a corner in Sinaloa, Mexico, to commencing a tenuous partnership with Camila on American soil.

Camila’s war handily brings a focus to season 2 that activates the darker layers of Teresa’s character and cleanly defines the teams involved. The influence of new showrunner Natalie Chaidez (a veteran of “In Plain Sight” and “12 Monkeys”) can be seen in the more agile pacing steering its first two episodes. Falcon’s Camila remains as much of a dragon as ever, but this new chapter focuses her fire as Braga’s character tames her anxiety of season 1 into a tense simmer.

“Queen of the South” was a solid performer for USA last summer despite its lack of critical raves. One could chalk up the tepid reviewer response to the bar set by other mainstreamed versions of telenovelas including “Jane the Virgin,” “Devious Maids” and “Ugly Betty” — all comedies. Successfully configuring the format to mimic the style of an American drama is a tall order in the peak TV era, doubly so when the plot features women as its criminal masterminds and anti-heroes.

Another hurdle may have been presented by the status of “Queen of the South” as a show that is consciously bilingual. Some of the Spanish dialogue is subtitled, but not all, nor does it need to be. It’s also a series that grants a measure of grace to a morally challenged female character, Teresa, whose loyalty to Camila is fertilized not by blind trust or fear but survival and vengeance. These new episodes elevate these ingredients far more than the first season do, and the plot and performances are immediately much more compelling because of this new emphasis.

TNT’s “Claws” has its diverting qualities, too, although it differs sharply in tone from “Queen of the South.” Odder still is its adoption of a flavor that mirrors the “blue skies” brand originated by USA. Its focus on the manicurists working at a Central Florida nail salon provides the series with an excuse to splash everything in gaudy colors, from the dialogue to the felonies.

And the charm of Nail Artisans, Manatee County’s most exciting strip mall parlor, is that it serves as the female equivalent of the barbershop: it’s part therapy office, part gossip parlor, with a bit of a comedy cellar thrown in for good measure. “Claws” also depicts the nail salon’s role as something of an egalitarian social hub with clientele ranging from working class to wealthy. Desna’s employees, however, are struggling financially as much as she is, and their loyalty is cemented by the knowledge that their fates are intertwined.

Nail Artisans barely hides the fact that Desna is in business with the local Dixie Mafia; one of her employees, Jennifer (Jenn Lyon), is married into the clan that’s using the shop to launder its funds. She’s flashy and fashionable next to her fellow technician Polly (Carrie Preston), an ex-con who hides her true colors behind a meek facade. Desna relies on her partner Quiet Ann (Judy Reyes) to keep the place safe; Judy is a butch lesbian with crooked braids who glowers at any potential threats. And there’s the new part-time employee whom nobody enjoys, Virginia (Karrueche Tran).

There are many threats, starting with the men who have lured Desna with promises of shared wealth and who predictably renege on their guarantees. What threat does Desna pose anyway? She and her girls merely paint nails.

When pushed, it turns out that they also do violent crime, though none of them are great at it. A sequence involving one of them tottering around in Lucite heels as the women attempt to dispose of a body is preposterous, almost in the best way. Almost, but not quite.

And this visual exemplifies main deficiency of “Claws.” The subplots that aim for poignancy, such as scenes involving Desna’s life with her autistic brother Dean (Harold Perrineau), are drowned by hyperbolic scenes involving Desna’s interactions with the kooky criminals she’s gotten in bed with — one, in the literal sense. The tightest aspects of the story involve the nail parlor and its denizens, but the parade of outlandish characters zipping in and out of their lives is distracting enough to confuse the atmosphere. As such, “Claws” isn’t fully realized as either a drama or a comedy, and its attempts at incorporating some version of the latter appears to be unintentional.

Both “Claws” and “Queen of the South” arrive in the wake of several cancellation of series featuring minority leads, including Netflix’s “The Get Down” and “Sense8,” Hulu’s “East Los High,” Fox’s “Pitch” and “Rosewood,” ABC’s “American Crime” and WGN America’s “Underground.” The business reasons behind these shows’ demises vary, but given the television industry’s circular habit of embracing inclusion and then backing away from it, the body count is worrisome.

How passionately the television audiences embrace “Claws” and the second season of “Queen of the South” remains to be seen. People tune in to shows like these for a number of reasons. But never underestimate the power of a wicked queen, regardless of the culture or context.